Participants of the 14th Herzliya Conference criticized Israeli Prime Minister Benjamin Netanyahu for persisting in refusing to define settlers who commit "price tag" attacks as members of a terror organization. 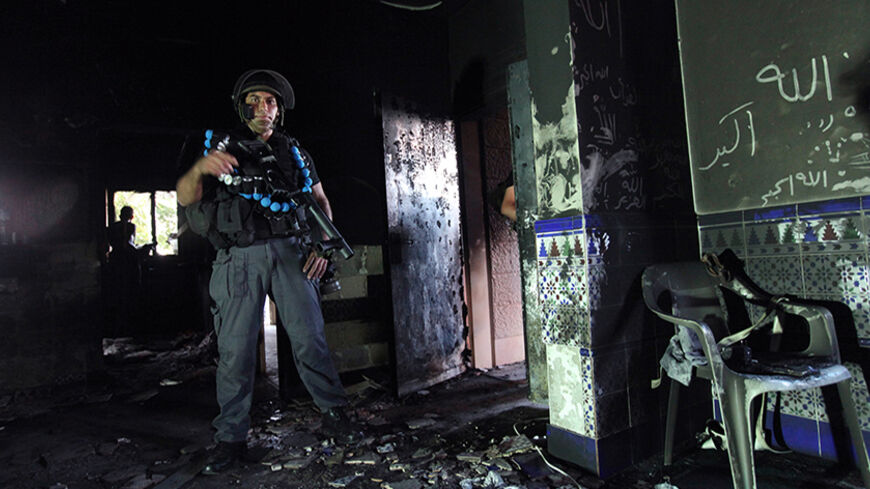 An Israeli police officer stands inside a burnt mosque after a price tag attack in the Bedouin village of Tuba-Zangariya in northern Israel, Oct. 3, 2011. - REUTERS/Dror Artzi/JINI

It took Shin Bet and the police an entire year to track down an 18-year-old youth from the Yitzhar settlement for participating in hate crimes in Abu Ghosh village, near Jerusalem. In June 2013, he had punctured the tires of 34 cars in the village and spray-painted such racist epithets as “Arabs get out” on the walls of houses. Three weeks ago, at the conclusion of an undercover investigation, authorities succeeded in tracking down the youth and connecting him to the acts. On June 8, a bill of indictment was filed against him in Jerusalem’s district court.

That it took a long time for the police and Shin Bet to locate the perpetrator of the act is typical. It is well-known that only a small percentage of so-called price tag (hate crime) attacks are ever solved. Shin Bet Director Yoram Cohen, Justice Minister Tzipi Livni and Internal Security Minister Yitzhak Aharonowitz have all been demanding that Prime Minister Benjamin Netanyahu declare perpetrators of price tag attacks as members of a terrorist organization. Due to right-wing political pressure in recent weeks, however, Netanyahu once again rejected such demands, preferring instead to leave intact a previous decision, adopted in June 2013 by the diplomatic-security cabinet, that categorizes price tag participants as an “unauthorized organization,” similar to the charity organizations connected to Palestinian terror.

There is a significant difference between the two terms: While “terrorist organization” allows severe punishment of up to 20 years behind bars, the latter classification is much more lenient and only allows the state to confiscate property belonging to the organization. According to the US Department of State's Country Reports on Terrorism, 399 attacks were carried out by “extremist settlers” against Palestinians in 2013. The report refers to these crimes as terrorist acts and includes scathing criticism concerning Israeli handling of their perpetrators.

According to professor Amnon Rubinstein of the Inter Disciplinary Center (IDC) of Herzliya, who is also a former education minister, “It is totally unacceptable when a state that knows how to pinpoint [the Palestinian leader] Abu Jihad somewhere near Tunis and eliminate him in his house cannot succeed in catching some teenagers near their homes.” He said this at the 14th Herzliya Conference on June 9 during a discussion on the sharp uptick in price tag acts. All the speakers warned against a scenario in which a hate crime could spiral out of control, causing a regional security event.

Micha Lindenstrauss, former state comptroller and judge (emeritus), was invited to participate in a conference panel, as were Brig. Gen. (res.) Nitzan Nuriel, former head of Counterterrorism Operations David Nachmias, government and public policy expert from the Lauder School of Government, and this Al-Monitor correspondent. The panel participants examined, among other things, the reasons behind the lack of a tough policy by the Israeli government against the price tag phenomenon, which has accelerated over the last few months, as highlighted by several cases inside the Green Line and by attacks against Muslim and Christian religious institutions.

Most of the participants called on Netanyahu to declare Price Tag a terrorist organization. Such a definition would enable authorities to greatly reduce this phenomenon, which qualifies as dangerous and holds the potential to ignite the entire region. “Price Tag can lead to a major disaster whose scope we cannot even imagine,” argued Rubinstein. “After all, the first target of such groups is the Temple Mount, and to the best of my knowledge, it is very easy to inflict damage on the Dome of the Rock and the al-Aqsa Mosque. One antitank missile is enough, and I don’t even want to think what could happen as a result.”

Lindenstrauss also expressed concern over the laxity exhibited by law enforcers vis-a-vis the phenomenon. He argued that as a result, Israel may well face a wave of Jewish terrorist acts that could spin out of control: “If punishment for harming a mosque or church is only a year in prison, that is a slap in the face with regard to the severity of the phenomenon. The State of Israel must change its legislation to facilitate appropriate punishment, otherwise things will continue to get worse. We need to use an iron fist here. There are too few arrests, and there is no reason that Shin Bet, which knows very well how to operate in other places, should not take appropriate action here as well.” Lindenstrauss added, “This phenomenon also causes us much damage in the world and destroys any possible relationship with Israeli and Palestinian Arabs.”

Nuriel, former commander of the Samaria Regional Brigade of the Israel Defense Forces (IDF), is well-acquainted with the phenomenon in all its forms. He, too, warned against a major security event and said that the Kusra village incident last January came close. Young Jews, who evidently planned on perpetrating a hate crime in the village, were caught by village residents before they had a chance to do anything. Some of the Palestinians attacked them violently, while others defended them and hid them until IDF forces arrived at the scene.

According to Nuriel, residents of the Arab villages are organizing ambushes and observation posts to capture price tag perpetrators. “The greatest danger posed by Price Tag are the consequences,” Nuriel said. “If we have Jewish casualties, all of Judea and Samaria will burn. If we take the Kusra incident as an example, we could have faced a lynching if some of the village’s notables hadn’t protected the youths.”

Nuriel argues that the government has not handled the phenomenon appropriately, only managed it, so the likelihood of a major incident is high. “I am concerned about a 'successful' incident that will involve slain Israelis. I see a situation where the villages in Judea-Samaria are organizing themselves against the price tag threat. They organize ambushes and observation posts, and it’s only a matter of time until price tag people fall into an ambush, something that can involve fatalities. Therefore, I feel that the danger of price tag acts, beyond the legal and political aspects, is that they endanger human lives on both sides. On the other hand, if this phenomenon will be taken seriously and the great damage it does to everyone would be understood, it will definitely be possible to reduce its dimensions or even freeze it altogether.”