The viral video of the so-called hate wedding, at which guests dance with guns and stab a photo of a murdered baby, should serve as a wake-up call to the religious Zionist movement, which must confront dangerous trends in its own backyard. 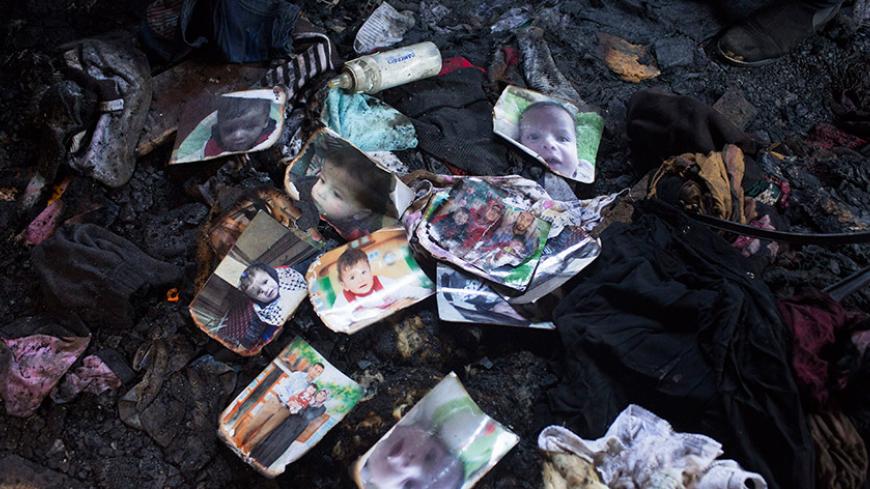 Family members and relatives view the remains of their house after a fire, suspected to have been set by Jewish extremists, killed an 18-month-old baby, Ali Dawabsha, and injured both parents and a 4-year-old brother in the Palestinian village of Douma, West Bank, July 31, 2015. - Getty Images/Oren Ziv

The head of the Samaria Regional Council, Yossi Dagan, is one of the most powerful people in the Likud's Central Committee. Together with a group of local council heads in Judea and Samaria, he appealed to Prime Minister Benjamin Netanyahu on Dec. 27, asking him to investigate claims by detained minors that they had been tortured by the Shin Bet. These minors are suspected of torching the house of the Dawabsha family in the West Bank village of Douma on July 31.

“We call on you to prevent the entire State of Israel from being dragged down that path until it becomes the kind of regime in which the investigator is also judge and executioner,” they wrote, asking the authorities to catch the “real” perpetrators of the deadly crime.

Dagan used Facebook to update his followers about his appeal to the prime minister. By doing so, he signaled support for the extreme right’s campaign against the Shin Bet, accusing the government agency of using torture to extract confessions from the Douma detainees.

The campaign organized raucous demonstrations and applied massive pressure to politicians aligned with the settlers to de-legitimize the Shin Bet. Nevertheless, it all screeched to a halt, largely because of the firm positions taken by HaBayit HaYehudi Chairman Naftali Bennett and the party’s powerful woman, Justice Minister Ayelet Shaked. Both of them expressed unequivocal support for the Shin Bet. The Yesha Council, the umbrella settlement organization, also published a statement in support of the Shin Bet.

In press interviews, Bennett and Shaked both stated that they had investigated the detainees’ claims of torture themselves. They said that not only was there no truth to these claims, they were also shocked by intelligence reports shared with them about how certain groups on the extreme right plotted to undermine the very foundations of the state.

But the death blow to this campaign of lies against the Shin Bet was undoubtedly the “hate wedding” video clip. The clip, aired Dec. 23 by Channel 10, shows wedding guests dancing with assault rifles held aloft and some of them stabbing a photo of baby Ali Dawabsha. In just two chilling minutes, the clip revealed the full extent of the danger posed by Jewish terrorism and the enormous urgency of the task facing the Shin Bet.

It's futile to search for any condemnation of the “hate wedding” on Dagan’s Facebook page. There wasn’t a single good word about the Shin Bet, either, as of Dec. 27. On the other hand, Dagan did write a post in support of Welfare Minister Haim Katz, who is running for chairman of the Likud Central Committee. Dagan wrote that he endorsed Katz in gratitude for the support the minister has offered to the cause of Jewish settlement in Judea and Samaria.

Over the past few years, feral extremism has evolved within the settlements, in the form of the hilltop youth and other radical organizations that reject the very existence of the State of Israel. And so, when investigating the sources of this disturbing phenomenon and the environment in which it was born, it is worth pausing for a moment on Dagan. He is, after all, a rising political star in Israeli public life. Although he is only 35, his influence over thousands of Likud voters makes him one of the most sought-after people in the party.

A ​Haaretz profile of him that appeared Nov. 14 describes his activities in the years before he dedicated himself to his current public political life. Dagan was a founder of the group “Homesh First,” devoted to repeated attempts to resettle the outpost in northern Samaria that was evacuated as part of the Gaza Disengagement Plan in 2005. He is also a founder of the Samaria Settlers’ Committee, a group whose objectives include “aiding the residents of Samaria in their struggle against any possible assault on Jewish settlement in Samaria, through various means.”

In 2008, the two groups released a public statement titled “Mutual Responsibility: The Key to Victory.” The statement was really a manual on how to resist Israeli security forces, referred to as the “forces of destruction,” when they attempt to evacuate illegal outposts.

Dagan is now a major political figure with considerable influence on right-wing settlers. A sharp statement by him in response to the “hate wedding” video certainly could have helped put a stop to that horrific phenomenon, especially at this important juncture. He may yet do that, but for now, Dagan is too busy with something that is far more important to him personally. He is involved in the political intrigue within the ruling party, designed to bring about the election of Katz as chairman of the Likud Central Committee. Success there would give the settlers even more power in the highest echelons of government.

It is unclear whether Defense Minister Moshe Ya’alon was referring to Dagan in a seething interview he gave Dec. 26 to the Israeli Channel 2 program “Meet the Press.” In it, he called on influential figures on the right and in the religious Zionist movement to do some soul-searching in light of the recent revelations. In any case, that seemed to have been his intention when he said, “When we blink at questions about the rule of law, about illegal construction and personal attacks, against me, for example … even by other ministers and Knesset members. … And when the Supreme Court comes under fire, young people who see things in black and white will conclude that it is legitimate to throw rocks and bags of urine at the police … and to puncture the tires of police cars.”

Ya’alon was obviously referring to the leaders of HaBayit HaYehudi. He meant Education Minister Naftali Bennett, who was on site during the evacuation of the Dreinoff buildings of the Beit El settlement, and to Minister of Agriculture Uri Ariel, who has called for the Shin Bet division that handles Jewish terrorism to be dissolved. And Ya’alon was talking about Knesset members such as Bezalel Smotrich, who declared that the Douma arson was not an act of terror, and Motti Yogev, who recently suggested that the Supreme Court be bulldozed.

Ya’alon’s comments struck at the heart of the issue. Jewish terrorism is just as much a consequence of the overall mood in the settlements as it is of anything else. Without insinuating anything about religious Zionism as a movement, it is impossible to ignore the fact that statements and actions in defiance of the state and the rule of law, such as the de-legitimation of the justice system, the uprooting of trees in Palestinian villages and illegal settlement construction have all become commonplace. Even worse, statements in that vein are interpreted and translated by young people into violent acts.

It may be just a few dozen young people associated with the hilltop youth who are behind the price tag attacks and celebrate the murder of a sleeping infant. Nevertheless, they cannot be considered apart from their surrounding environment. Their closest circles include their parents and rabbis, while their broader circles include public figures from Judea and Samaria — and their outermost circles, politicians representing right-wing parties.

Anyone in those circles who has already dissociated himself from the campaign against the Shin Bet and expressed disgust in response to the “hate wedding” did the right thing. Anyone who hasn’t done that yet should. The condemnation should come from every possible group on the right. Anyone who ignores the violence, stammers a weak response or makes light of these acts legitimizes Jewish terrorism and the assault on the rule of law.

The “hate wedding” video should be a wake-up call to the leaders of the religious Zionist movement and the Yesha Council. It is time for them to take responsibility for the evil that is sprouting in their backyard.