Why Bennett is siding with the Shin Bet

HaBayit HaYehudi Chair Naftali Bennett has expressed his unequivocal support for the Shin Bet in the face of claims that it tortured the suspected murderers of the Dawabsha family. 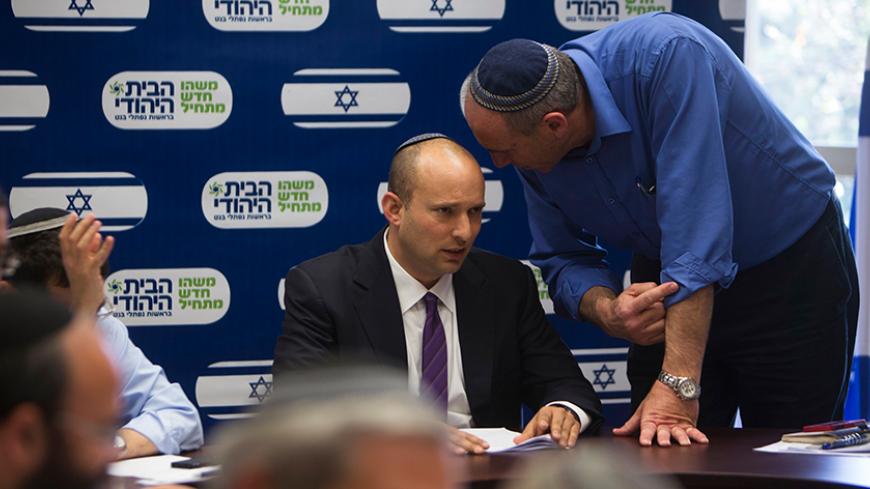 Education Minister Naftali Bennett gave one of the most important interviews of his career as leader of the national religious sector to Army Radio Dec. 22. After an aggressive series of protests against the way the Shin Bet and legal system have allegedly treated the Douma detainees accused of killing the Dawabsha family, the HaBayit HaYehudi chairman insisted on supporting the Shin Bet. Perhaps even more important, he made his statement before the prime minister’s office issued a similar statement of its own.

In the background of this bold statement, some groups on the right are calling for the release of the young detainees suspected of participating in the murder of the Dawabsha family in the village of Douma in late July. According to the leaders of this right-wing effort, Shin Bet interrogators have been using physical and emotional torture on the suspects in the course of their investigation.

These young Jews were arrested in late November under a heavy cloak of secrecy. The Shin Bet reportedly claims that it is treating the investigation as an urgent priority to thwart “severe terrorist attacks that could lead to a loss of life.” That is why it's chosen to employ several relatively unusual methods, including administrative detention, banning the suspects from meeting with their lawyers, closed-door hearings and a gag order on the proceedings.

The public campaign for their release began in mid-December. So far, it has included violent demonstrations in front of the homes of the director of the Shin Bet, Justice Minister Ayelet Shaked and various judges, as well as press conferences and media interviews by the parents of the detainees. The families are making the very serious claim that the murder suspects have been tortured during their interrogations.

The protesters include many women, young people and even children from the hard core of the radical right in the territories, the very same group that produced the "hilltop youth," known for violence against Palestinians. On Dec. 21, the demonstrators moved to the home of Knesset member Bezalel Smotrich in the settlement of Kedumim. The organizers targeted this young Knesset member, who represents the more hawkish wing of HaBayit HaYehudi, having determined that he could help them in their fight from within the Knesset. When Smotrich stepped out to meet the demonstrators, he was greeted with placards reading, “Jews don’t torture Jews,” “Bezalel, do your children sleep well at night?” and “What if it was your son?”

Over the coming days, these wandering demonstrations will reach the homes of more Knesset members from HaBayit HaYehudi in an effort to win their backing and increase support for their campaign to free the suspects. From the demonstrators’ perspective, the detainees have already become a symbol of heroism in the struggle against an obstinate regime.

This is a very accurate example of the violent separatist dynamic, originating in the school of Jewish terrorism, that continues to fan the flames of hatred. A reminder of where it could lead came on Dec. 22, when unidentified assailants threw smoke grenades into a home in the Palestinian village of Beitillu, near Ramallah, while people were inside with their infant son. The walls of the home were spray-painted with the slogan, “Revenge! Regards, the Prisoners of Zion.” Someone was apparently using this incident to send a clear message to the Shin Bet: “Despite what you are doing, we still have the capacity and strength to act undeterred.”

With these events smoldering in the background, demonstrators supporting the Douma detainees are attempting to recruit Knesset members from the hard right to their cause, or at the very least, to trap them in a public spectacle that will prevent them from taking action against the protest. This was the backdrop for Bennett’s statement supporting the Shin Bet wholeheartedly and without the slightest reservation. In that same interview with Army Radio, Bennett described the events in the only logical way: “What we are seeing here is terrorism. … These are people who do not recognize the State of Israel as a legitimate state and are really trying to bring about Armageddon.” He continued, “We need to take the harshest measures possible to prevent the next Douma.”

Bennett also said that he and Shaked had investigated claims that the suspects were tortured and concluded that there was nothing exceptional or inappropriate about the Shin Bet’s handling of the case. He said, “The Shin Bet protects us from the Palestinians on a daily basis. We must trust that same Shin Bet now, in this action.” Such statements are especially important coming from a prominent member of the right who represents the settlers in the government. Had his statements been more tepid, a large group of people in Israel would have concluded that the Shin Bet is, in fact, unjustly persecuting innocent victims and torturing them to force a confession.

Bennett also commented on remarks by Smotrich, also a member of HaBayit HaYehudi, who argued that the arson attack in Douma was not an act of terrorism. Bennett responded, “I’m sorry, but I think that Knesset member Smotrich is mistaken. They killed an entire family in its sleep. For what? To bring down the State of Israel.” In response, Smotrich tweeted, “We must use the harshest measures possible to catch drug peddlers and traffickers in women, murderers and organized crime. Democracy is over.”

No less troubling than Smotrich’s remarks is a comment made by HaBayit HaYehudi member and Agriculture Minister Uri Ariel. While Bennett backed the Shin Bet, Channel 10 revealed that Ariel posted to a private WhatsApp group, “We must shut down the Jewish section of the Shin Bet,” referring to the department tasked with preventing Jewish terrorism. Furthermore, the minister called for a meeting of the Ministerial Committee on the Shin Bet to investigate evidence he claimed to have received about the means of interrogation used against the Douma detainees, including the use of physical violence.

It is quite possible that growing tensions within HaBayit HaYehudi mark the beginning of the end of the partnership between the factions that make up the party: HaIhud HaLeumi (Ariel and Smotrich) and the Mafdal (the faction’s remaining Knesset members). Bennett’s decision to back the defense establishment and the legal system in this case presents a real hindrance to the violent radical wing operating in the West Bank as it tries to recruit the support of the ideological right that remains loyal to official state institutions.