What took Israel so long to arrest Douma murder suspects?

After four months of investigation, suspects in the murder of the Dawabsha family were apprehended — but will they be convicted? 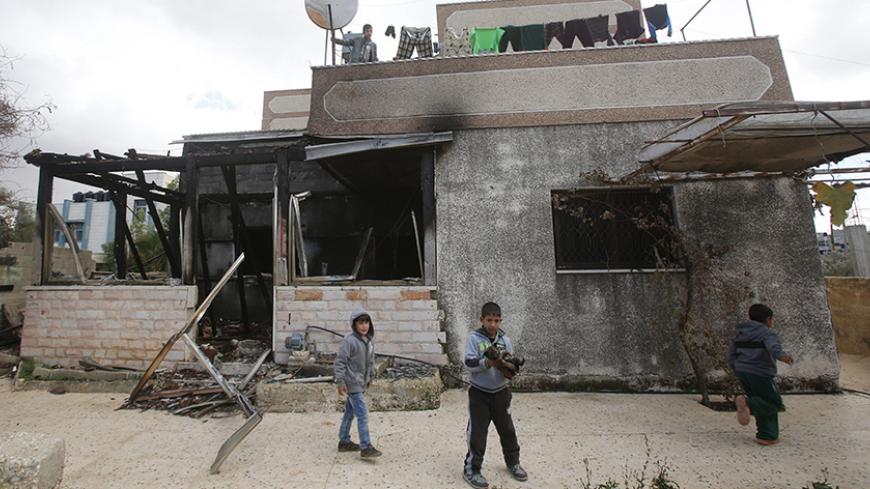 Palestinian boys play in the yard of the Dawabsheh family house in the village of Douma, near the West Bank city of Nablus, Dec. 3, 2015. - REUTERS/Abed Omar Qusini

The gag order relating to the arrest of radical right-wing activists suspected of belonging to a Jewish terrorist cell and committing terror attacks was partially lifted on Dec. 3. Among other things, the detainees are suspected of having perpetrated the attack in the village of Douma on July 31, setting the Dawabsha house on fire and killing three family members — mother, Reham; father, Saed; and Ali, their 18-month-old baby. Only Ahmed, 5, survived. Although his life is not in danger, he is still hospitalized at Tel Hashomer Hospital in central Israel with serious burns all over his body.

The Israeli defense establishment is convinced that the terror attack in Douma was one of the triggers that unleashed the intifada that has been raging in Israel since the beginning of October. But the brutal murder of the Dawabsha family was not the catalyst that precipitated the escalation, but rather the fact that the perpetrators of that attack had not been captured for weeks on end. This stands in stark contrast to the efficiency and effectiveness of Israel’s General Security Service, the Shin Bet, in apprehending Palestinian terrorists.

In recent months, charges were made in the Palestinian Authority (PA) that, due to political reasons, Israel was in no hurry to nab the perpetrators of the Douma attack. A statement by Defense Minister Moshe (Bogie) Ya’alon Sept. 10 to the effect that the defense establishment was aware of the identity of the perpetrators of the attack but could not disclose that information in order not to reveal its sources further boosted the rumor mill concerning Israel’s ineptness in capturing the perpetrators.

Now — some four months later — it has been reported that the Shin Bet has arrested several people suspected of being implicated in that arson attack. The gag order was (partially) lifted due to petitions from Israeli news outlets as well as a myriad of rumors that flooded social media. Identifying the suspects by name remains prohibited, as is the disclosure of any information about the locality they live in. The laconic information that was released for publication suggests that the Shin Bet apparently still does not have sufficient evidence to bring those suspects to trial. Chai Haber, a lawyer representing one of the suspects, reportedly even thinks that the “clearer the picture becomes, the more it will be understood that the statements from the authorities on progress being made in any of those investigations have no leg to stand on.”

Representing another suspect, attorney Itamar Ben Gvir — himself a radical right-wing activist — lambasted the incarceration conditions, alleging, in declarations to Israeli media, that “little by little [Israel] is turning into Argentina. We’re not allowed to meet with the suspect nor is he present in the court proceedings. The Shin Bet is hiding him in one of its cellars after it became apparent that he was beaten and roughed up during the arrest. This is no way to run a democratic regime.”

Ben Gvir has struck a raw nerve. Comparing the incarceration conditions and interrogation methods between Palestinian and Israeli attackers — which is not unreasonable — reveals a marked difference.

Under the law and in tandem with getting legal advice, the Shin Bet was given the tools for employing harsh interrogation methods, to elicit information and get a confession from a Palestinian detainee suspected of carrying out a terror attack, including putting the detainee under physical and psychological duress and pressuring his family members. When it concerns Palestinian suspects, the term “ticking bomb” is usually used to “launder” the Shin Bet’s demands for such interrogation methods. In other words, everything must be done to thwart attacks and spare innocent lives.

For all we know, the methods used to interrogate Palestinian terrorists are not applied to the suspects of the “Jewish underground” for the time being. Furthermore, the suspects’ battery of lawyers provides them with a legal umbrella that makes it difficult for the Shin Bet and police investigators to work freely. This gives the suspects a morale boost, which, in turn, is translated into exercising the right to remain silent during investigations.

Additionally, the suspects’ family members plan to stage a demonstration in front of the home of Justice Minister Ayelet Shaked (HaBayit HaYehudi) with a demand to improve the suspects’ incarceration conditions and to demand “respect of human rights.”

The mother of one of the suspects said, “My son is a sensitive, sweet, bright kid. He has a great sense of humor and loves nature and the Land of Israel. I believe that he knows we’re here outside, that we love him and believe in his innocence, and that we’re waiting for him to come back home safe and sound."

Given the partial lifting of the gag order, what can be said at this time is that in the wake of an elaborate and extended intelligence effort in collaboration with the Israeli police, the Shin Bet has a solid foundation to assume that they have caught the perpetrators of the Douma attack. But to bring them to trial, several actions have to be taken, such as gathering additional corroborative evidence. The Shin Bet expects to obtain this evidence by exerting pressure on the detainees in the hope that one of them at least will incriminate the others.

The million-dollar question at hand is whether concrete suspicions and circumstantial evidence, which would have otherwise probably been sufficient to convict a Palestinian terrorist in a military court, will be enough to convict Jewish terrorists in an Israeli civilian court. And there’s another question: Does the Shin Bet have the legal and public backing to keep all the suspects under arrest until the investigation is exhausted? With a Palestinian detainee suspected of terrorist activity, the answer to that question would have undoubtedly been affirmative.

Hussein Dawabsha, Mohammed’s grandfather, this week told Al-Monitor that the arrest of the suspects did not bring him any relief. “Justice should be served and it’s a good thing that suspects were caught,” he said, “but let’s also see that they’re convicted. Why did it take so long to arrest them?”

In his opinion, the arrests won’t bring calm to the ground. “I don’t want to talk politics,” he explained, “but I will say that there are other reasons for the escalation, such as roadblocks or repeated attacks against Palestinians by settlers. The burning of my family may have sparked anger among Palestinians, but it wasn’t just that. Catching the suspects won’t solve everything.”

Touching on his grandson’s condition, he says with great pain: “Mohammed is recovering but he is still not doing well. Every day the [doctors] put him in an induced coma for four hours to wash the burned skin and redress him. The pain is excruciating. He still asks why his mom and dad don’t come to visit him. He doesn’t know they’ve passed away. We haven’t said anything to him about that.”