A lengthy investigation by the Shin Bet and Israeli Police has uncovered a plot to destroy the State of Israel and led to the indictment of two "hilltop youth" suspects in the murder of the Dawabsha family. 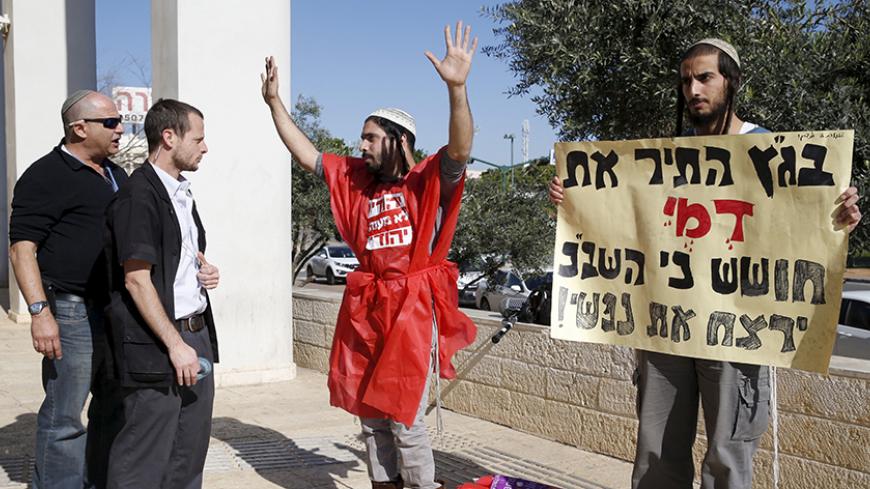 Court security guards watch as Israeli ultranationalists (R) protest against interrogation methods used by the Shin Bet against suspects in a fatal arson attack in a West Bank village five months ago, during a court hearing in the case in Petah Tikva, Israel, Dec. 28, 2015. The placard in Hebrew reads: "The High Court turned me into an easy prey. I'm worried that the Shin Bet will murder my soul." - REUTERS/Baz Ratner

For the first time since the establishment of the State of Israel, the Shin Bet has used what it calls “special methods” for investigating Jews. Some in the extreme right argue that these tools include torture.

This is the first time such a group has been exposed in Israeli history. This religious/ultranationalist underground group's main purpose is the elimination of the State of Israel, putting an end to Zionism and fomenting regional chaos that would facilitate the establishment of a messianic Jewish kingdom in the place of Israel. The means for destroying the Jewish state, according to the doctrine of this group, is killing Arabs. The goal was to pit the Arab world and the international community against Israel, undermine the authority of the central government and create chaos that would lead to a revolt. Then, during the revolt, the reins of government would be placed in the hands of those believing in the supremacy of the Torah over democracy.

Their first acts after the coup were supposed to be to appoint a king and re-establish the biblical Judean kingdom that would conduct itself according to Jewish religious law alone. In the first stage, all the Arabs and other non-Jews would be warned to leave the territory of the kingdom immediately. In the second stage, all those refusing to leave, including women and children, would be put to death immediately. There is no place for non-Jews on Jewish holy land. Anyone who identifies a striking similarity to the rules applied by the Islamic State's caliphate does according to his own judgment. Still, at the end of the day, when religion is taken to extremes and becomes a messianic tool, this is exactly what religious extremism looks like.

An extensive investigation by the Shin Bet and police finally cracked the case and led to the disclosure of what is now called the “Revolt Group.” Its members, numbering a few dozen youths ages 15-24, call themselves the “Givonim” ("Hilltoppers"). They are responsible for the shocking murder of the Dawabsha family in the West Bank village of Douma on July 31, 2015, in the course of which three family members were burned to death in their sleep: 18-month-old Ali and his parents, Riham and Saad. Their son Mohammed, 4, was the only one to survive the inferno.

On Jan. 3, Amiram Ben Uliel, 21, from Jerusalem was indicted on three counts of murder. According to the indictment, Ben Uliel hurled a Molotov cocktail into the family home after he spray-painted the house with graffiti. Then he escaped into the darkness and walked 10 kilometers (6 miles), the same distance he had walked to get there that night. Another youngster was also indicted for his involvement in the attack. Together with these two, another six suspects were arrested, leading to the solving of a number of violent acts against Arabs that were carried out in the last two years by members of the cell. The murder in Douma was the first attack in the series that led to a loss of human life. In its wake, the penny dropped in the Shin Bet. The attorney general authorized the security services to use “special methods” of interrogation for the first time against Jews, to conduct administrative detentions and to adopt a heavy hand against Jewish terrorists. Before this, investigations of Israeli Jews were done according to Israeli law that does not permit such measures to be used, while Arab terror is investigated according to completely different laws.

In a previous article for Al-Monitor, I gave an overview of the illegal outposts in the Shiloh Valley. My assessment was that such outposts might have spawned the murderers of the Dawabsha family in Douma. This assessment has been proven true. The source of the hard-core Givonim group lies in the unruly hilltop youth scattered throughout the Shiloh Valley and the nearby Baladim Hill (another illegal outpost), all of which serve as breeding grounds for malignant religious extremism that extends its shoots throughout Judea and Samaria.

The Shin Bet seized “documents of the revolt” and others outlining the theology of the members of this sect, who were organized in compartmentalized terror cells of three to five members each. The cells operated secretly and independently of one another, and each knew nothing about the activities of other cells. Infiltrating this gang with Shin Bet agents is almost impossible, reminiscent of attempts to insert agents into extremist Islamic terror organizations.

These group members share an extremist messianic ideology. They are closely familiar with one another, grew up together and became radicalized together. They hold the rest of the world in suspicion and are well versed in interrogation and efforts to track them. They live in West Bank outposts, know how to survive in nature and find refuge in caves and abandoned structures. They are able to exist in wild territory, disconnected from civilization for many long days.

Ben Uliel grew up in the Etzion settlement bloc, the son of a Karmei Zur settlement rabbi who is viewed as moderate and statesmanlike. He lived for a period in the illegal outpost Geulat Tzion. Ben Uliel was interrogated over several weeks until he confessed to the murder of the Dawabsha family, and even reconstructed the act in front of Shin Bet interrogators in the middle of the night, in the same spot where the murder took place. Now his family and friends claim that his confession was extricated from him under torture and is therefore not admissible.

Thus, the Shin Bet faces a complicated legal battle to authorize this confession and add additional testimony such as hidden details that Ben Uliel supplied regarding the terror site and the testimony of a minor who worked with him to plan the attack.

The cracking of the “revolt cell” has sparked a fierce political controversy in Israel. The extremist right calls for making a distinction between Arab terror and Jews who perpetrate crimes and holds that torture must not be used against citizens of the state. But the vast majority of the political map supports the decision to use torture against such suspects. Even Education Minister Naftali Bennett and most of his colleagues in HaBayit HaYehudi say that “terror is terror.” They are keenly aware that these poisonous weeds who grew up in their garden plots endanger the State of Israel no less (and maybe even more) than the Arab enemy.

The group's staggering ideological doctrine is laid out in detail in a number of documents that were seized by the Shin Bet. According to them, the State of Israel — which it calls the “kingdom of malice” — “has no right to exist and we must operate to destroy it, then build a Jewish kingdom.” Members of the cell commit themselves to appoint a king who will rule over the nation and force it to obey the harshest of religious precepts. The documents contain detailed instructions on how to burn down mosques or churches and how to shift from inflicting damage and burning down Arab possessions to burning down homes with Arabs living inside. The Shin Bet identified the moment in which the group transitioned from inflicting property damage to inflicting physical harm, to create as much chaos as possible on the ground and promote their agenda.

The General Security Service assesses that there are between 30 and 40 hard-core members involved in actual acts of terror. The second tier numbers approximately 100 youths who support the ideological doctrine and are part of the terror cells scattered on the outposts and hills of Judea and Samaria. Surrounding them is another tier of several hundreds, maybe thousands, who support the general idea of replacing the State of Israel with a Judean kingdom. These members serve as a logistical network providing support to the members of the active cells.

As a result of intensive investigations by the Shin Bet over the last two years, some of the acts of violence and property damage have been solved, including the firebombing of mosques and churches, and 23 suspects detained. It is believed that the group has not been entirely apprehended and dismantled, and there are still a number of operatives at large who are willing to give their lives for the cause. After the murder in Douma, the Shin Bet focused on averting additional similar events.

The security services reckon that the incident in Douma was one of the formative causes for the eruption of the Palestinian terror wave that broke out in October, about two months later. The perception that Israel hurries to solve Arab acts of terror but is not capable of subduing Jewish terror aroused much agitation among the Palestinians and also internal criticism in Israel. The Shin Bet has removed this burden from its shoulders by using all the means at its disposal. In doing so, Israel has reached a dramatic watershed in understanding the existential threats it faces — not only from its surroundings, but also from within.