Who are Israel's hilltop youth?

The suspects arrested for the murder of the Dawabsha family members belong to the extremist hilltop youth, who dream of rebuilding the Kingdom of Judea and consider the Israeli state their enemy. 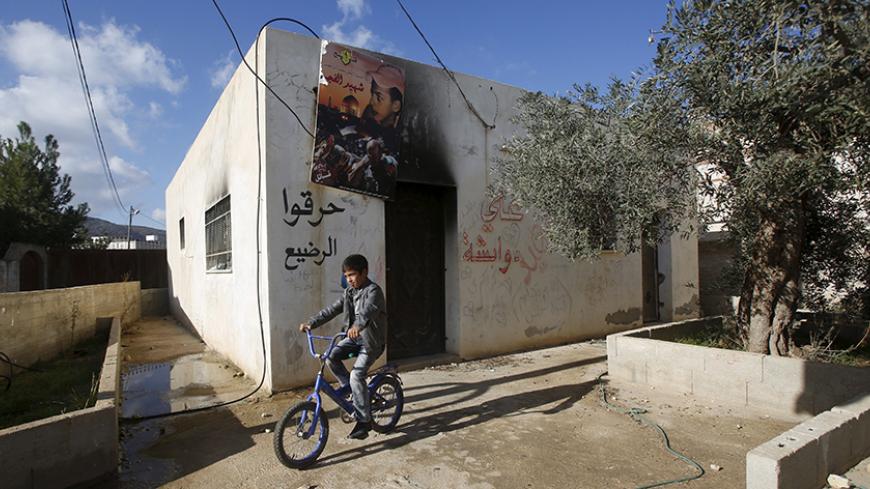 A Palestinian boy rides his bicycle past the Dawabsha family house in Douma village near the West Bank city of Nablus, Dec. 3, 2015. Members of a "Jewish terror group" have been arrested over a July arson attack on the Palestinian home in the Israeli-occupied West Bank that killed a toddler and his parents, Israeli police said on Thursday. - REUTERS/Abed Omar Qusini

“Here in Douma is where it all began,” a senior Israeli military official told Al-Monitor, speaking on condition of anonymity. “We date the start of the current wave of terrorism to the murder of the Henkins on Oct. 1, but there is no doubt that the seeds were planted on July 31, when the Dawabsha family was burned to death in their home in the village of Douma. The fact that this incident has not been resolved by the Shin Bet, but the murderers of the Henkins were caught just four days after the attack, has caused considerable unrest among the Palestinians.” This is an accurate description of the current state of affairs.

Riddled by conspiracy theories, the Palestinian street was convinced that the Shin Bet and the Israel Defense Forces (IDF) were not really trying to catch the murderers who had burned Saad and Riham Dawabsha to death along with their infant son, Ali. Another son, Ahmed, 5, suffered severe burns in the incident and remains hospitalized.

“When the attack targets Jews, you can see how efficient the Israeli security forces are,” one top Palestinian official said, requesting anonymity. “They solve the crime and capture the people responsible within days or weeks at most. Then suddenly, when the attack goes the other way, and it is Jews who murder Arabs, nothing happens.”

On Nov. 30, I accompanied two senior Israeli officers on a tour of the “Land of Outposts” in Samaria. We stood atop Tel Katzir and looked out over the surrounding settlements, the illegal outposts that sprung from the settlements and the Arab villages dotting the landscape. At one point, the officer extended his arm to point to a Palestinian village stretching across a slope east of the hill where we were standing. It was Douma. The Shin Bet had identified the escape route that the perpetrators took as they retreated from the village, but they had not at that time managed to track them down.

Our tour began in Ariel, the Israeli settlement considered the “capital of Samaria.” From there, we traveled east along the Valley of Shiloh, a region hotly contested by Palestinians and Jews. In the past, Palestinians had worked the land in the valley. The problem was that most of the peasant farmers could not produce documents proving that they owned the land, and the fields were gradually seized by settlers. Today, the valley is flourishing. It is cultivated intensely and blanketed with vineyards, olive trees and a variety of crops, all grown by settlers.

At the heart of the valley is Tel Shiloh, where, according to Jewish tradition, the Ark of the Covenant was placed. Well before the First Temple was erected in Jerusalem, Shiloh had served as the main site for Jewish rituals. As far as the Jews today are concerned, they are simply returning to the land of their forefathers and re-establishing the ancient Kingdom of Israel. They have even gone so far as to adopt biblical agricultural techniques. From the Palestinians' perspective, these Jews are invaders dispossessing them of their lands.

At the end of the day, with the tour over, we learned that the Shin Bet and the police had finally arrested several Jewish suspects for the horrific murders in Douma. As of now, it remains uncertain whether there is enough evidence to indict them in an Israeli court. Based on the earliest reports, there is a real chance that the suspects will evade prosecution. Jewish lawbreakers fall under the jurisdiction of the Israeli legal system, while Palestinians in the West Bank are subject to military law. Not only is the latter legal system far more severe, it also provides authorities with many more tools to investigate crimes and interrogate suspects. Nevertheless, the recent arrests seem to have restored a modicum of calm, at least for now. They prove that Israel’s security forces really are investing considerable effort in an attempt to resolve this painful affair.

According to one of the Israeli officers also speaking on condition of anonymity, “The hard core from which these murderers emerged is what we call the ‘hilltop youth.’ We are talking about no more than a few dozen young people, at most, who have cut themselves off from the rest of the state. They live in the wild, break the law and believe that they must re-establish the ancient Kingdom of Israel and Judea. They also have a very disparaging attitude toward Zionism.”

The day after the suspects were arrested, their friends took to WhatsApp to express their anger and frustration. A collective call went out for prayers and spiritual retreats to help the detainees, so that they don’t crack under interrogation. Text messages in support of the suspects referred to the arresting agencies as “Zionists.” “Yes,” the Israeli officer said, “it is sad, but these people are no longer a part of us. They are somewhere else entirely.”

These lawbreakers range in age from 13 to 23. They have long hair, beards and sidelocks, and they wear large, bowl-shaped yarmulkes, biblical-style clothing and sandals. They carry backpacks with outdoor survival gear and sometimes a shepherd’s pipe to boot. They are used to living in caves and spending time in isolation on hilltops. They can last days, weeks and even months there. “They are confused youths who have lost touch with the traditional hierarchy. They don’t listen to their parents, and they have no rabbis. They create their own ideology, and they consider the State of Israel to be the enemy,” said one of the Israeli officers.

One Shin Bet source expanded on this a few weeks ago, during a telephone briefing, reported here on condition of anonymity: “They regard soldiers in the IDF and members of the Shin Bet to be the biggest threat. These people know how to withstand interrogation. They know how to fudge evidence. No matter how harsh the interrogation is, they will never say a word, and they will never betray their friends. All in all, these really are a bunch of confused youngsters. They don’t evoke any fear or respect when we speak to them or arrest them. Some of them are infested with lice. They are totally disheveled. They live in a completely different world, a world that existed here thousands of years ago. They regard Israel as little more than a passing sin that will eventually vanish from the world.”

The ruins of the Geulat Tzion (Redemption of Zion) settlement can still be found in the Valley of Shiloh. It was an illegal outpost demolished by Israeli authorities on more than one occasion. The hilltop youth returned each time and rebuilt it, only to have it torn down again, and so the cycle continued. In effect, this playground is a microcosm of the “rebel’s” struggle against the “kingdom.” It allows both sides to prove to the Palestinians and the wider world that they have no plans to surrender.

In an effort to overcome this phenomenon, Israeli law enforcement created the Song of the Sea, a task force of teams from the IDF, Shin Bet, the civil administration and the State Attorney’s Office. Its purpose is to “apply pressure on the ground,” increase the rule of law and prevent hilltop youths from doing whatever they want. That Geulat Tzion is still in ruins in December 2015 is a consequence of stricter law enforcement.

Nevertheless, the mood on the ground is still seething. News that the murders in Douma have been solved has yet to reach the area, and the Palestinian wave of terror continues. The assessment of the military establishment is that the current violence will continue over the coming year at the least. On the other hand, the IDF also believes that there is a real chance that it might subside if the murder in Douma is solved, if no one loses control and if there is no significant event that causes violence to spiral and open the Gates of Hell.

One thing that would help restore calm would be a renewed diplomatic process between Israel and the Palestinians somewhere in the background, but the chance of that in the coming year tends toward zero. In other words, the Shin Bet and the IDF will have to confront the terror without it.