Has Israel returned to days of Jewish Underground?

Ex-Shin Bet chief Avi Dichter tells Al-Monitor that despite the tragic consequences of the attack in Douma, this current manifestation of Jewish terrorism is not as well armed or well organized as that of the 1980s at the time of the Jewish Underground. 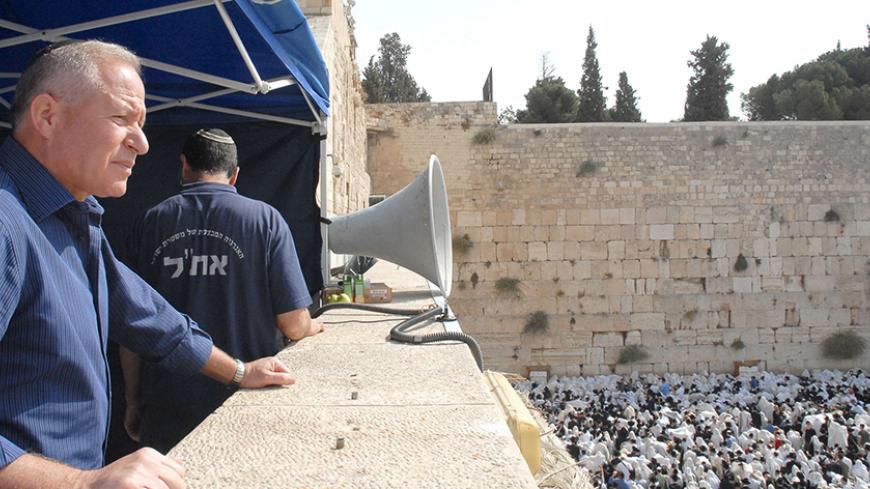 Avi Dichter, Likud Knesset member and former director of the Shin Bet, thought the proper response was obvious. After the July 31 Molotov cocktail attack in the Palestinian village of Douma that killed a toddler and severely burned other family members — an apparent escalation in Jewish terrorist activity — the state would have to employ administrative detention to combat the phenomenon; that is, detention without indictment or trial of Jewish terror suspects.

In fact, on Aug. 4, Defense Minister Moshe Ya’alon signed an administrative detention order against Mordechai Meyer, an 18-year-old right-wing activist from the Ma’aleh Adumim settlement, because of his alleged involvement in violent activity and recent terrorist attacks. The order, recommended by Shin Bet, is considered an unusual and extreme response, allowing an individual to be imprisoned for a period of six months without trial.

Such a measure has almost never been ordered against Jews, although the number of terror acts against churches and mosques, allegedly perpetrated by right-wing activists, continues to grow. The deadly attack in Douma, in which Ali Dawabsha was burned to death, ultimately compelled the security forces to clamp down on the current escalation of Jewish terrorism.

In an interview with Al-Monitor, Dichter said administrative detention is an especially effective tool that “interferes with the way people involved in terrorism operate and ultimately leads to a significant reduction in their ability to launch attacks.” Despite the tragic consequences of the attack in Douma, Dichter does not believe that this current manifestation of Jewish terrorism is as widespread or well armed as it was at the time of the Jewish Underground in the 1980s.

Al-Monitor:  On Aug. 3, Meir Ettinger, grandson of Kach [a terror organization active in the 1980s] founder Rabbi Meir Kahane, was arrested on suspicion of involvement in a terrorist group. At the same time, we saw the release of writings by Ettinger in which he talks about a divine commandment to rebel against the government and create anarchy, even if it leaves the Middle East in flames, in order to re-establish the Kingdom of Israel. In view of this and following the attack in Douma, what do you conclude?

Dichter:  These ideas about the Battle of Armageddon are hardly new. They’ve existed in many different places and shapes. The Islamic caliphate isn’t any different. These are all fantasies. I want to remind everyone that there were much more disturbing times in which people who shared those fantasies also had impressive military records. That was the case with the Jewish Underground [a group that engaged in terrorist attacks against Palestinians, including the attempted assassination of three Palestinian mayors]. I remember that period [during the 1980s] and understand the significance of people committing strategic terrorist attacks, such as attacks against mayors, in order to ignite the whole region. And we haven’t even mentioned their plans to blow up the Temple Mount or their plans to blow up several buses simultaneously in Jerusalem. The consequence of that would have been awful.

What we are seeing now is a disorganized group of young people. The adults are taking advantage of the fact that the minors have no inhibitions. They also lack a coherent guideline, apart from following some madman. In this case, it is Kahane’s grandson. He brings his legacy to the table, while others bring charisma.

Al-Monitor:  But still, they allegedly perpetrated a very serious attack in Douma.

Dichter:  That’s true, but it is important to examine what happened in terms of the process and not just the consequences. The vast majority of Molotov cocktails are thrown at Israelis, while only a small minority are thrown by Jews at Arabs or churches. There was no special coverage of the phenomenon until now. However, when a baby is killed and an entire family is severely injured, and when it happens so close to the murder of a girl attending a gay pride parade [in a stabbing rampage by an ultra-Orthodox man July 30], it suddenly feels as if the rise of Jewish terrorism is especially intense. That feeling exists even if neither event represents the ultimate manifestation of terrorism, for which we prepare ourselves. At the same time, these events prove that sometimes a knife or a Molotov cocktail can do more than a grenade or a gun. I assume that the security forces know how to look at the situation from a professional perspective and ask whether we are returning to the heyday of the Jewish Underground or if there is just a yearning for the days of the Jewish Underground. I think that the latter is more correct. There is no doubt that there is a desire to relive the days of the Jewish Underground, but these aren’t the same people, they lack the same tools, and they are being watched by Shin Bet. This means that it won’t be easy for them to do what they plan.

Al-Monitor:  Actually, the impression is that they aren’t being watched very well.

Dichter:  ​Shin Bet is well aware of how to map out who the leading figures are. The difficulty has always been to translate the intelligence into evidence. It is easier to operate when you are dealing with an organized infrastructure. It has its own unique characteristics, and there is communication among its members. When it is a group of young people, or even minors, who are only just beginning their activities, Shin Bet has no information about them. These people won’t usually say anything during interrogation either.

The expectation is that in those rare instances in which the Israeli security forces have already managed to produce evidence, the punishment will be severe enough to serve as a deterrent. If someone is sent to prison for having Molotov cocktails in his house, even if he hasn’t thrown them yet, other people will realize that it is not worth throwing them, because the punishment will be all the more severe.

The problem starts at an even earlier stage. It is very difficult to indict someone for incitement and rebellion. The State Attorney’s Office doesn’t believe that this can be translated into a conviction. On the other hand, failing to convict would deflate the entire system.

Al-Monitor:  So deterrence should be the main tool in this battle?

Dichter:  ​In the end, it is all a matter of deterrence. Today, when someone wants to throw a Molotov cocktail, he knows that he isn’t really risking anything, because punishment for that barely exists. Neither the prosecution nor the courts would insist on some dramatic punishment. We can look back at all the cases in which we managed to catch the perpetrators. At the end of the entire process, we will find that the punishments they received weren’t serious. In the end, the system is assessed by the sum of its constituent components and not by whether Shin Bet managed to arrest the perpetrators. I also think that after the murder of the baby, the mood will be different. It looks like the punishments will be different too.

Al-Monitor:  Does political radicalization on the right contribute to these phenomena?

Dichter:  What Knesset member Motti Yogev said on July 29 [following the decision to demolish two houses in the Beit El settlement] about [using bulldozers to tear down] the Supreme Court was very bad, and I think that he realizes it too. But members of the Knesset don’t serve as models for Kahane’s grandson or the hilltop youth [extremist settlers] to emulate. After all, they don’t believe in Israeli law. Even rabbinic authority has no effect on them, and certainly not parental authority. They are a group that latches on to the radical leader of the day, until they are arrested or until they grow up. Sometimes growing up resolves the problem.

Shin Bet is well aware that in cases such as this, if you don’t cut them down when they’re small, you will get to what we had in the past. Happily, we are not seeing the same kind of terrorism that we saw in the past, with shootings and bombings. Just 13 years ago [in 2002], we had the “trailer bomb” in the East Jerusalem al-Tur neighborhood, with gas balloons and explosive bricks placed at the entrance to a hospital and girls’ school. God only knows what might have happened if the device hadn’t been discovered by chance. At the same time, we also had the Bat Ayin [Jewish] Underground. Both cases involved established infrastructures with access to weapons and explosives.

What we’re talking about now is people who have very bad intentions. I’m happy to say they also have very meager means. If they had rockets, they’d be firing them at Nablus. That’s why the name of the game is knowing exactly whom we’re talking about and stopping them before they launch an attack. And if we catch them after an attack, they should be put on trial.