Israeli security branches have been given approval to use a wider range of methods to curb violence by extremist settlers responsible for price tag attacks and the recent murder of a Palestinian baby. 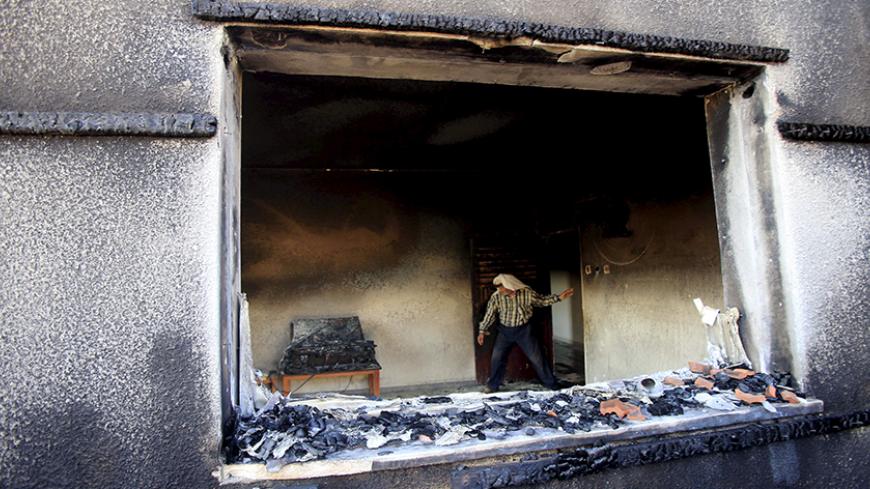 A Palestinian man inspects a house that was badly damaged in a suspected attack by Jewish extremists on two houses at Douma village near the West Bank city of Nablus, July 31, 2015. - REUTERS/Abed Omar Qusini

Israel is in shock. On July 30, Yishai Shlissel, an ultra-Orthodox extremist, burst into a gay pride parade in Jerusalem. Armed with a large knife, Shlissel indiscriminately stabbed six people in a rampage before eventually being stopped by the police. On Aug. 2, 16-year-old Shira Banki died from her wounds. Her attacker had been released from prison less than a month ago, having served a ten-year sentence for a similar act committed a decade ago, at a gay pride parade in Jerusalem.

While Israelis were recovering from that trauma, unknown assailants threw a Molotov cocktail into the home of a Palestinian family in Douma village in Samaria. Flames quickly enveloped the house, and the family members inside were unable to extricate themselves in time. Ali Dawabsha, one and a half years old, was burned to death. His parents and four-year-old brother are in critical condition. Doctors in Israeli hospitals are helping the Dawabsha family fight for their lives around the clock.

Thus, a heavy cloud suddenly descended on Israeli society, along with an especially severe August heat wave. Is Israel changing? Has the radical Arab Spring phenomena surrounding Israel begun to infiltrate the only democracy in the Middle East? The short answer is, no. Not yet. Telltale signs are beginning to emerge, however. The writing is on the wall, before our very eyes.

The Shlissel incident is relatively straightforward. There are groups of isolationist, extremist ultra-Orthodox groups in Israel that view everything represented by Tel Aviv as heresy. Shlissel is one of them. The parade incident was indicative of a massive police failure in intelligence, vigilance and physical security during that event. At the moment, however, Shlissel and his ilk do not threaten Israeli democracy.

The incident in Douma is far graver, however. It is part of what have been called, until not long ago, “price tag” attacks, mainly against Arab communities and Muslim and Christian religious sites, perpetrated by so-called hilltop youth, that is, extremist right-wing settler youths. No more. The Douma incident has thoroughly shaken Israel's society, media, and leadership. Finally, after a long delay, we are calling the enemy by its name — terror, perpetrated by terrorists. Jewish terrorists.

On Aug. 2, Israel’s diplomatic-security cabinet met and authorized Shin Bet and the police to use “special interrogation methods” to thwart the activities of this Jewish terror organization. Mainly, this means the use of administrative detention (detention without indictment), a method used by Shin Bet with regard to Palestinian terror. Until now, this instrument has not been used against Jews. Also, interrogations of Jews was always conducted quite differently from interrogations of alleged Arab terrorists. Shin Bet now emphasizes that if one of the Jewish underground detainees, once arrested, is considered a “ticking bomb” — someone planning a terror attack that can still be thwarted — the security forces could use the same special interrogation methods against him.

Who are these Jewish hooligans? According to Shin Bet, they are a group of several dozen underage Jews, most of whom are settlers, who live in several illegal outposts in the area of the Yizhar settlement as well as in some areas farther east. They live in seclusion, completely insulated from all signs of Israeli sovereignty, which they do not recognize.

About two weeks ago, when the group that set fire to the Church of Loaves and Fishes on June 18 was apprehended, a “user’s manual” titled “Kingdom of Evil” was found in their possession. These youths view Zionist Israel as heresy against the god of Israel. Their objective is to harass the government and harm it in every possible way until the rulership changes, and Israel becomes a “Halacha state,” run by Jewish religious law. Yes, like the Islamic State, only much more amateurish and also, luckily for us, much less violent.

These youths know how to circumvent Shin Bet’s counter-terrorism methods. They do not use cell phones. Some of them sleep in caves, maintain an extreme compartmentalization and follow a strict code of discipline. They have no authority figures — no parents, no rabbis, no role models. They are their own role models, the sowers of seditious seeds who grew up on the margins of the extremist Israeli settlements.

Shin Bet is well aware of their identities and activities, but cannot obtain the evidence necessary to indict them in a court of law, because it would have to expose its sources to do so. Even when youths are arrested, they remain silent. Not one of them has ever spoken under interrogation. Out of the gang of five that torched the Church of the Loaves and Fishes, three were released for this very reason. Indictments have been filed against the other two by virtue of hard work on the part of the police and Shin Bet, which collected forensic evidence on the ground, including DNA from one of the Molotov cocktails, and examined footage from hundreds of security cameras in a radius of dozens of kilometers.

As noted, these terrorists are estimated to number several dozen. They are surrounded by what is called the support circle, numbering several hundred people, and around this circle is another, quieter circle of several thousand, who are mainly involved in logistics. This still does not threaten Israel’s government, far from it, but the phenomenon is worrisome and could undermine order and stability in the region.

In the first half of 2014, Shin Bet noticed signs of radicalization within this group. Until then, price tag attackers had mainly tried to set empty mosques on fire. From that point in time, however, they began to try to torch occupied Palestinian homes. Their first, horrific “success” was achieved at the end of July.

In July 2013, the Israeli government had acceded to Shin Bet’s request to define the gang as an “unlawful organization.” It had originally requested to label them a “terror organization,” but the government of Prime Minister Benjamin Netanyahu contented itself with the narrower, more minimal label. One way or another, the new appellation allows the police and Shin Bet to use necessary interrogation techniques. According to tracking data, there has been a decline in the number of Jewish nationalistic violent incidents and attempts since then, but the severity of acts has increased, culminating in the horrific fire July 31. Now, in light of the harsh results and public pressure, Shin Bet will invest its best resources and efforts to rein in and stop such attacks.

The bottom line: It is still too early to mourn the passing of Israel’s democracy. It is important to remember that an event of this type arouses shock and horror in Israel and elicits an almost wall-to-wall series of denunciations, and in this case a condolence letter from Deputy Foreign Minister Tzipi Hotovely, from the extreme right wing, to Saeb Erekat, a senior official in the Palestinian Authority.

In Israel, public squares are not named after murderers, and if murderers are caught, they are incarcerated for many years. Nevertheless, anyone who really values Israeli democracy has reason to be concerned. Something bad is happening to Israeli society, something alienating and evil. It begins on the social networks and then seeps into more and more hearts.

Events such as in Douma, under certain circumstances, could lead to the eruption of a third Intifada, and that is the last thing we need at the moment, on both sides of the separation fence.