Israel’s lenient policy on settlers is to blame for the "price-tag" vandalism perpetrated by Jewish right-wing extremists in the Arab village of Abu Gosh, a symbol of coexistence. 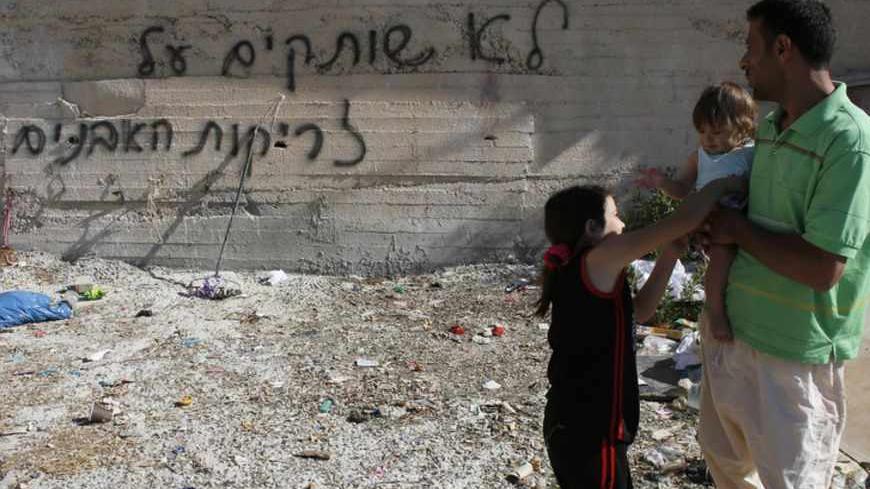 Palestinians stand next to graffiti sprayed on a wall near their home in the Arab neighborhood of Beit Hanina in east Jerusalem, June 24, 2013. The words say: "We will not remain silent in the face of the stone-throwing." - REUTERS/Ammar Awad

''Price tag'' activists acted yesterday (June 24) again. This time it happened in Beit Hanina. The inhabitants of this neighborhood in east Jerusalem discovered in the morning that anonymous hands had vandalized 21 cars and sprayed on the walls graffiti of the Star of David star and a slogan: ''We won't keep silent when stones are being thrown.''

Less than a week before, on June 18, it happened to the inhabitants of Abu Ghosh. The residents of this peaceful and friendly village, situated in the Jerusalem corridor, found that during the preceding night “Arabs out!” hate graffiti and the like had been sprayed on the village's houses, and 28 cars were vandalized.

And if you wonder about the meaning of the term price tag, well, it is laundered language that almost legitimizes and cleanses acts of vandalism which have long since crossed the criminal line against Palestinians and their property. Hurling stones, scattering spikes along traffic routes used by Palestinian vehicles, setting fire to fields and orchards, spraying slanderous racist graffiti and desecrating mosques are just some of these acts.

Since that incident, the policy of price tag, which literally means the price charged for any terrorist attack or any harm done to the settlers, as its advocates in the Jewish settlements in Judea and Samaria perceive it, has become a routine course of action.

The bored and incited far-right youths of the settlements (nicknamed the “hilltop youths” — another “laundered” term), encouraged by the soft-hand policy adopted by the state of Israel, in general, and the police, in particular, with respect to the offenders, provide a fertile ground for these actions. According to police data recently presented to the Knesset Interior Committee, in 2012, the police opened 623 criminal cases against “price tag” activists, 200 activists were arrested and 123 indictments were filed.

It further emerges that since the beginning of the current year (2013), 165 criminal cases were opened, 76 suspects were arrested and 31 indictments filed.

As noted, the price tag policy has now gone over the top. And it has set a shameful record not just because of the severity of the harm done or of the damage to property, but because of the selected target. It is the first time that such acts have been perpetrated not against any Palestinian village, but against the village of Abu Ghosh, an Israeli Arab community known for the neighborly relations between its Jewish and Arab residents. What’s more, it is the only Arab village that maintained its neutrality even during the intifada.

The village of Abu Ghosh lies  on the outskirts of Jerusalem and for many Israelis is a landmark on the way from Tel Aviv to Jerusalem and vice versa. A a place to stop by for a dish of hummus, it has been a paragon of coexistence. So the vandals who sprayed the hate graffiti and destroyed property knew perfectly well what a soft spot they were hitting. They were well aware that they were targeting not only “Arabs,” against whom they sought to revenge for some reason or another, but also the concept represented by Abu Ghosh — an island of sanity.

Abu Ghosh was the only Arab village in the Jerusalem corridor that maintained its neutrality in 1948 (during the War of Independence). Not only did the local inhabitants refrain from taking part in the fighting, some of them, according to testimonies, even helped the Haganah [Jewish paramilitary organization in the pre-state days] and IDF fighters during the siege of Jerusalem.

It is interesting to note in this context that according to a report by the Haganah exposed in Joel Ben-Dov’s book “Abu Ghosh,” the residents of the village had reservations about the activity of Sheikh Hussein Abd al-Qadir, the leader of the Arab forces in Jerusalem and its environs in the War of Independence, and the Haganah consequently issued an operational order prohibiting any damage or injury to the village.

From 1948 to this very day, the village of Abu Ghosh has been known as an oasis of peace and hope. Numerous restaurants have been opened in the village, music festivals are regularly held there, and hiking trails in the Jerusalem corridor pass through the Crusader-era Benedictine monastery in the village. In recent years, dozens of Jewish families moved to Abu Ghosh, thus realizing the vision of coexistence between Jews and Arabs.

This peaceful equilibrium has been shattered by the “price tag” activists, who are sowing hatred and trying to destroy all that has been built over decades. The recent attack has been widely condemned, across the entire political spectrum. The first politician to visit the place in person was ultra-Orthodox Shas party chairman Aryeh Deri. “The hands which sprayed the words ‘Arabs out!’ should have borne in mind the slogan hailed by our arch-enemies: ‘Juden Raus!’ [‘Jews out!’],” Deri said, adding: “True, they wrote it in German, but it is the same thing; it stems from the same place.”

And while the phenomenon is expanding, turning into a matter of routine, the legal and law enforcement authorities in Israel are engaged in internal disputes over the question whether these actions should be characterized as “terror attacks” and treated accordingly by taking special measures, or whether they are “merely” crimes motivated by nationalism, which should therefore be handled by other means.

On June 16, the issue was raised for discussion in the diplomatic-security cabinet. Internal Security Minister Yitzhak Aharonovich and Justice Minister Tzipi Livni recommended that the “price tag” perpetrators be regarded as a terror organization.

However, under pressure exerted by Prime Minister Benjamin Netanyahu, who was apprehensive of a coalition crisis liable to be triggered by far-right members of his party and others outside it, a milder version was finally adopted. It was decided to authorize the defense minister to announce price tag activists as guilty of “illegal association,” the way charity organizations affiliated with the Hamas or the Islamic Jihad are labeled.

Will the regulations adopted put an end to price tag actions?

It is rather in doubt. Yet, it seems that this time around the issue has made it to the top of the public agenda. This is evidenced in the following statement of Chief of the Israeli Police Yohanan Danino: “The devastation caused by anonymous vandals in Abu Ghosh is liable to spark turmoil in the state of Israel and far beyond it.”

Danino may be stretching it a bit. Anyway, without playing down the seriousness of the actions perpetrated by the price tag activists – in Abu Ghosh or elsewhere, whether in the West Bank or within the Green Line — they are not the main culprits.

True, it is the “price tag” activists who actually sprayed the “Arabs out!” hate graffiti; however, they were inspired by a lenient policy toward the settlement enterprise, dating back dozens of years, which for generations has given the settlers the feeling that they are a superior class, standing above the law.

The writing had been on the wall long before the price tag attacks were first launched, and that one, none can delete.