The attack on an Israeli-Arab sanitation worker in Tel Aviv last week has underlined racism inherent in parts of Israeli society and brought to light those who are fighting it, reports Shlomi Eldar. 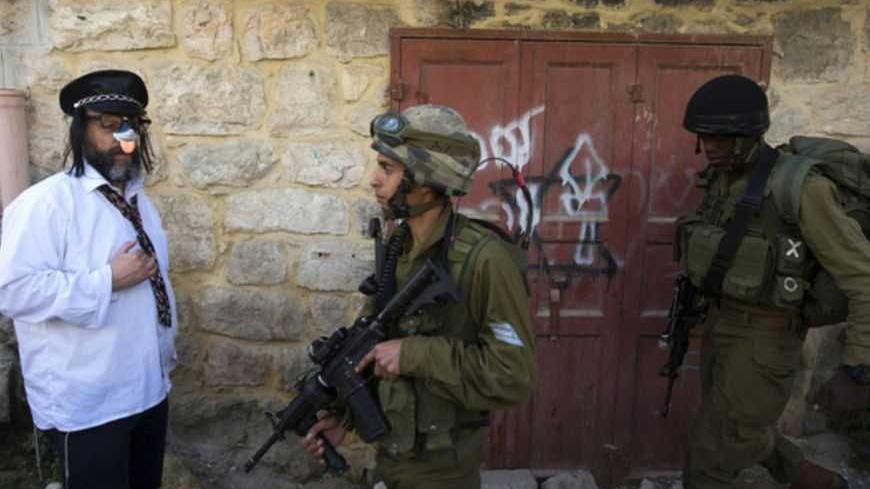 A Jewish settler, dressed in costume, stands near Israeli soldiers as they guard a parade for the holiday of Purim in the West Bank city of Hebron Feb. 24, 2013. - REUTERS/Ronen Zvulun

“Tonight we visited Hassan Ausruf, who is hospitalized at the Department of Ophthalmology at the Tel Aviv Sourasky Medical Center. ... Hassan was brutally attacked by a group of some 20 youths on the city’s seafront promenade early Sunday morning [on the Jewish holiday of Purim, Feb. 23-24] for no other reason than being an Arab.”

The above comment was posted by Talia Goshen on her Facebook wall. Goshen, the owner of one of the major video editing studios in Israel, is an active partner in the “Light Tag Forum,” set up by various organizations, movements, youth movements, schools, associations and local councils from across the spectrum of Israeli society in response to the “price tag” violence against non-Jews in Israel.

Goshen goes on to recount the story of Ausruf, describing what happened that Sunday morning: “In Tel-Aviv, they were celebrating Purim. And it seems that those 20 teenagers took it too far, “lightly” hopping from the Book of Esther and the Amalekites [a people cited in the Bible, hostile to the Israelites], to Hassan Ausruf and the Arabs.

“Hassan is a resident of the city of Jaffa, a father of three children aged 4, 5 and 10. He is working hard, putting penny to penny to buy his children the best education he can afford. His 10-year-old kid speaks Arabic, Hebrew, English and French, but the boy has not uttered a word ever since the lynch, and he seems so upset that he can barely function.”

Goshen concludes her post with a call for help that characterizes, in fact, the purpose of the “Light Tag” forum that she runs: “Hassan Ausruf has given us his cell phone number and he will be happy to receive more visitors. In addition, there may be a need to raise money or to assist his family in dealing with the authorities.”

“Price tag” is a “laundered” term for the unlawful and violent course of action attributed to extremist far-right activists in Israel (for the most part, known as the “hills youths”), adopted in response to the demolition of illegal outposts in the territories or the destruction of individual structures by the Israeli army or police.

The main purpose of this policy is to deter such actions against the settlement enterprise (hence “price tag”.)

The “Light Tag” forum was set up to counter “price tag”, which is seen by the forum members as harming not only its immediate victims, but also as threatening the legal and governmental authorities of Israel and as precluding any prospect of peaceful coexistence of Jews and non-Jews. Whenever forum members learn of “price tag” attacks, they set out as a group to display sympathy with the victim, wherever he may be, to protest against the vandalism and racism and to publicly demonstrate that for many in the State of Israel, this is not the way.

It is interesting to note the makeup of the forum. Its members who came to encourage Hassan Ausruf, the Arab street cleaner beaten by a band of rowdy youngsters, are all associated with organizations that see Judaism as a unifying rather than a divisive element. They strive to bridge between Judaism and Israelism and between Jewish culture and universal humanistic values and ideas. Goshen herself has been ordained as a secular rabbi by the “Tmura” Institute, the institute for training secular humanistic rabbis and Jewish leadership in the spirit of free Judaism, which champions the promotion of secular, humanistic Jewish culture.

Rabbi Gilad Kariv, who was among the visitors of Ausruf, is a lawyer by profession and executive director of the Israel Movement for [Reform and] Progressive Judaism. Another visitor, Roy Portal ,is working for “Bina” – Center For Jewish Identity and Hebrew Culture, established after the assassination of [Israeli Prime Minister Yitzhak] Rabin as a forum for secular Israelis who seek to explore their Jewish heritage and find their way back to their Jewish roots.

Another sympathizer is Gadi Gvaryahu, from “Forum Yod Bet b'Heshvan” movement, which aims to encourage pluralism and tolerance in the religious education system and which highlights universal humanistic values, under the slogan “Treating the other decently takes precedence over Jewish teachings and practice.” [Vayikra Rabbah 9:3]

It is no mere coincidence that these are the people who make up the “Light Tag” forum. For long years, many Israelis had the feeling that they had been dispossessed of Judaism, in the true sense of the concept, by the rabbinical establishment. It is a large public that is truly interested in building a bridge to Judaism. However, the Judaism they aspire to is not one that breeds racism and nurtures hatred of foreigners and abhorrence of “the other,” nor one that calls for their exclusion from society. The Israelis we are talking about see Judaism not just as a religion, but rather as an all-embracing and all-encompassing humanistic philosophy.

It is an ever-growing group of socially minded and involved people who, looking around at the goings-on, especially since the assassination of Yitzhak Rabin, have been lamenting the transformation of Judaism — in the hands of a number of elements acting in its name — into a religion that gives rise to hatred and violence.

It is a group that is seeking another way — a way that would bring us all closer together rather than separate and alienate us. Incidents such as the beating of the Arab sanitation worker from Jaffa, the graffiti sprayed on mosques and monasteries or the destruction of property of Arabs or of leftist activists in response to the demolition of some settlers’ structure in the West Bank sicken and embarrass them. In their quiet, low-keyed, non-impassioned attitude, they are trying to show that there are other Israelis, too, not full of hate, that Judaism is a human-centered philosophy that advocates universal moral values, which are misinterpreted and misrepresented by the rabbinical establishment and exploited by it to further its own interests.

“Light Tag” is not the only forum that decided to take action following the assault on Hassan Ausruf. A Facebook group set up under the heading “Jaffa breaks silence” has already coordinated a demonstration against violence and racism. Quite a number of Israeli Jews came to sympathize with Ausruf and his family and offered help and support. Especially noteworthy is the initiative taken by a teacher named Noa Savir, who went to see Hassan Ausruf at the hospital, captured him on film, and subsequently screened the video in class.

“For three days I was racking my head, asking myself how I was going to present that story of ghastly racist violence against Hassan Ausruf to my students,” Savir wrote. “After all, the big brother, the friend or the cousin of any one of them could have been there, with that gang of teenagers. They themselves may get into a similar situation in another two or three years. What would they do then? How would they cope? Would they dare confront the others?

“And should I discuss with them alcohol, violence, peer pressure? Should I talk about racism? And could you at all put your finger on the source of it all?

“So I felt I had to visit Hassan. I asked him what he thought I should tell the children. I recorded him on videotape. He was touching and poignant. It was a moving experience.”

Savir goes on to tell how her students responded to the video shown to them. It was interesting to see how they were dealing with the issue of racism – be it against Arabs, ethnic communities or various specific groups, she writes in her post. She notes that the students got deeply involved, so much so that even when the lesson ended and the bell rang, they chose to stay on and continue the discussion (!) They had so much more to say.

“My students were, once again, amazing,” Savir writes in conclusion. “There were at least ten of them waiting for their turn to speak. When the bell rang, we went on for a while and then, five of the students carried on the discussion for another hour after their classmates left. And we’ve just got started.”

In recent years, racism among certain parts of the Jewish society in Israel against foreigners, in general, and Arabs, in particular, has raised it ugly head – whether in the territories, in Tel Aviv or on the soccer field. All the same, it turns out that there are still many in the State of Israel who regard racism as a malady that cannot and should not be tolerated – people who are fighting for the image of the Jewish Israeli society and who would not give up. Whether in groups or as individuals, young and old alike, they all believe that the hatred of “the other” not only can be, but must be eradicated. And they all as one yearn for the victory of light over darkness.

Shlomi Eldar is a contributing writer for Al-Monitor’s Israel Pulse. For the past two decades, he has covered the Palestinian Authority and especially the Gaza Strip for Israel’s Channels 1 and 10, and has reported on the emergence of Hamas. In 2007, he was awarded the Sokolov Prize, Israel’s most important media award, for this work. He has published two books: Eyeless in Gaza (2005), which anticipated the Hamas victory in the subsequent Palestinian elections, and Getting to Know Hamas (2012). In 2010 Eldar directed the documentary film Precious Life, official selection of the 2010 Telluride and Toronto International film festivals, which won the Ophir Award (the Israeli Oscar for documentary filmmaking).