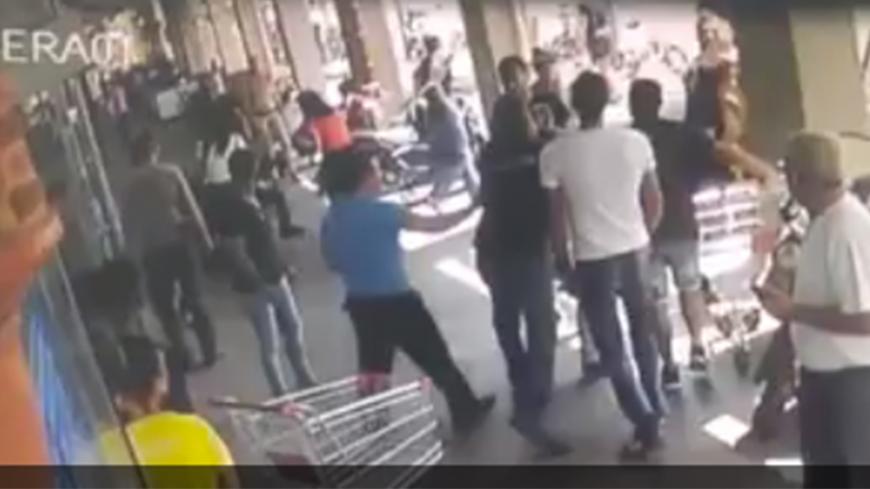 A video displays the beating of Maysam Abu Alqian by an Israeli border policeman in Tel Aviv, May 22, 2016. - TWITTER/Lirankog

Were it not for the civilians who used their smartphone cameras to document the May 22 beating of Maysam Abu Alqian by Israeli border policemen across from city hall in Tel Aviv, this story would probably not have made headlines and probably not even have been covered by the media. According to Gadi Gvaryahu, chairman of Tag Meir, an organization that works against racism in Israel, events reflecting hatred of Arabs by Jews are any everyday occurrence. These include verbal violence, minor physical abuse and in certain cases even a wild and vicious attack of the kind experienced by Abu Alqian simply for being an Arab. Members of Tag Meir also believe racism and incitement against Arabs on social media have become a viral phenomenon in Israeli society, which is why nationalistically motivated attacks on the streets against Arabs are almost routine.

Tag Meir Forum is an umbrella of some 50 Israeli organizations that identify with the goal of fighting these trends. This week a lobby was launched in the Knesset at the instigation of Tag Meir, which concluded that the multiple incidents of violence against Arabs must prompt parliament to combat this dangerous phenomenon threatening Israeli society.

All 120 Knesset members were invited to the May 24 launch event, but not a single government minister showed up. Only two lawmakers from parties that make up the ruling coalition attended — Merav Ben-Ari and Rachel Azaria of the center-right Kulanu Party. Yuval Rabin, the son of the late Prime Minister Yitzhak Rabin, also attended, delivering a speech that linked the current government’s lack of vision on the diplomatic front and the many hate crimes against Israeli Arabs.

The Tag Meir Forum classifies the border policemen attack as a hate crime. Knesset member Ksenia Svetlova of the Zionist Camp, who wrote the Justice Department’s internal affairs department demanding that the policemen be disciplined, also argued that “the video footage and eyewitness accounts leave no room for doubt — although the assault was carried out by policemen, in plain view, it was a hate crime. The man was attacked only because he was an Arab.”

Abu Alqian was working at a grocery store on Tel Aviv’s Rabin Square to save money for college. He planned to start his psychology studies next year at Ben-Gurion University in the Negev. Abu Alqian claimed that a plain-clothes policeman came up to him when he went to throw out the trash, and because of his dark-skinned appearance asked him for identification. Abu Alqian explained to the policeman that he works at the store, Super Yuda, and his ID card was inside and that anyway he wasn’t required to show it to someone in civilian clothing. In response, the policeman started beating him and was immediately joined by two other border policemen who struck his face with great force, kicked him all over his body and called him a “stinking Arab” despite the protests of people who gathered around and asked them to stop.

Abu Alqian required medical attention at Tel Aviv’s Ichilov Hospital. “Maybe the motive is the racism spreading through the State of Israel, or maybe there are instructions from high up to treat us differently,” he told journalists after leaving the hospital.

Gvaryahu told Al-Monitor that his organization had “compiled a list of such events. We have a sampling of at least 30 people who were beaten up only because of their Arab appearance and only because they dared speak Arabic [in public] — from slight injuries to lifelong disabilities.” Tag Meir tracked incidents reported in the media to reach Arab victims, but Tag Meir is convinced there are numerous other cases that go unreported, whether out of the victims’ fear for their lives or lack of trust in Israeli authorities.

The lack of trust stems from a perception that the Israeli police and state attorney don’t bring the perpetrators to justice. Forum members presented data indicating that only 20% of reported hate crimes actually make it to court. Tag Meir’s data shows that from 2013 to 2015, police logged 1,562 complaints about hate crimes by Jews. Only 287, less than 20%, resulted in indictments. According to a report compiled by the organization and presented at the Knesset lobby’s launch event, over 65% of the investigations were closed or are in the process of being closed due to “lack of public interest” or because the perpetrators were not found.

Over the past five months, during the so-called “intifada of knives” and wave of terror, five cases of aggravated violence against Arabs, verging on lynches that could have ended in murder, have come to the attention of Tag Meir. These incidents should have sounded a loud alarm for Israel’s law enforcement authorities, but the forum’s members sense that almost nothing was done in response.

On May 1, fans of the Beitar Jerusalem soccer club attacked Nadwa Jaber, a teacher at the bilingual school in the Jewish-Arabic community of Neve Shalom. The fans saw Jaber with her children in a car at Jerusalem’s Malha shopping mall, near the soccer stadium, and attacked her verbally in front of her daughters and their friends. The incident came to the public’s attention due to a Facebook post by Rotem Yadlin, the mother of one of Jaber’s Jewish students.

“Nadwa educates kids to a life of equality and fraternity, co-existence, peace, faith in mankind,” Yadlin wrote after the incident. “You may be real heroes who know how to spit at a six-year-old girl. We, on the other hand, will keep dreaming together and making this country a better place — for the sake of Amit [Yadlin’s daughter], Jaber’s daughter [6-year-old Intissar], for ourselves, for Nadwa.”

“We meet people who have undergone mental trauma,” said Gvaryahu. “The bodily blows they sustain are secondary to the trauma they experience. They feel humiliated, and humiliation by cops beating Arabs is compounded, leaving them to wonder why it is that the establishment that’s supposed to defend them from the attacks of hot heads actually closes ranks and beats them, too, with horrible brutality.”

But there is another phenomenon, of organizations and volunteers who mobilize to combat racism and violence against Arabs in Israel. After Abu Alqian’s brutal beating in Tel Aviv, the Negev Coexistence Forum for Civil Equality launched a crowdfunding campaign in order to enable Abu Alqian to pay for college. As of this writing, 81,000 shekels ($21,000) were raised, double the initial goal of 40,000 shekels.