A report by the Israeli Tag-Meir group argues that extreme-right groups that incite hate and violence are receiving state funds both directly and indirectly. 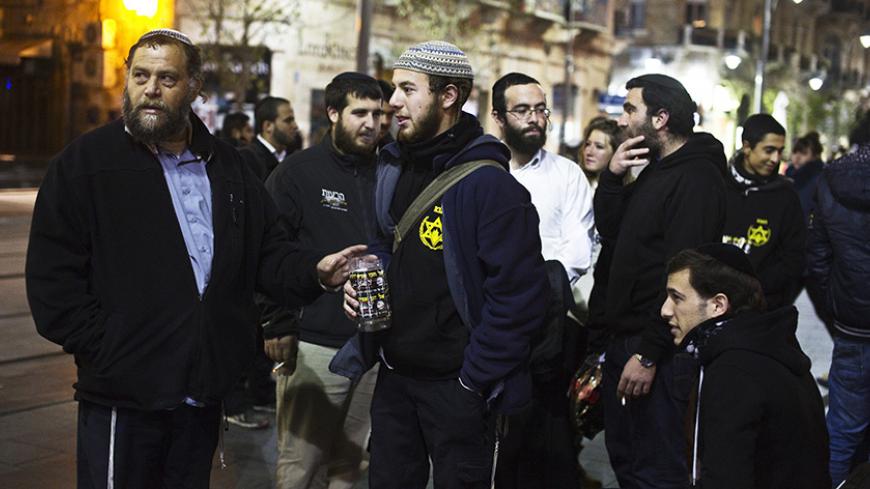 An Israeli nonprofit dedicated to promoting tolerance presented on March 21 a report titled “Funding Racism" in the Knesset Committee on Transparency headed by Knesset member Stav Shaffir. The report by the Tag Meir forum indicates that the State of Israel provides direct or indirect funding to radical right-wing organizations described as “racist” or “of a racist complexion.” Tag Meir, Hebrew for “Light Tag,” is a coalition of Israeli organizations founded in 2011 as a counterweight to the hate crimes perpetrated by rightist Jewish groups against Arabs and other non-Jews — attacks known in Hebrew as “price tag."

The report’s author, Noam Vilder, told Al-Monitor that the findings paint a frightening picture that she assessed is only the tip of the iceberg of a sophisticated scheme for funneling money to radical right-wing organizations, “eroding the fabric of co-existence, damaging the values of tolerance in Israel society, and mongering hatred between Jews and Arabs.”

One such organization cited in the report is Lehava, headed by extreme right activist Bentzi Gopstein. This group was originally dedicated to preventing assimilation (through marriage between Arabs and Jews), but in recent years has branched out and launched a campaign of incitement against Arabs — for example, a campaign against Arab bus drivers in Jerusalem titled “Putting the steering wheel in Mohammed’s hands is not good,” as we reported in Al-Monitor, or supporting the burning of churches.

Other organizations mentioned in the report are the “Jewish Idea” yeshiva founded by racist Rabbi Meir Kahane (who was killed in 1990), and the Honenu nongovernmental organization (NGO) that provides legal aid for Jews suspected of terror attacks against Arabs. Among its beneficiaries are Ami Popper, who murdered seven Palestinians in 1990, and members of the Bat Ayn underground who tried to blow up a Palestinian girls’ school in East Jerusalem in 2002.

“When we started working on the report we knew we’d find interesting things, but we didn’t really know what we were getting into,” Vilder said. According to her, the radical right operates under the guise of preventing assimilation or of supporting humanitarian values such as aiding the needy, thus enjoying direct or indirect state funds. But in fact it operates to promote highly racist goals.

Honenu, for example, the nonprofit that in the past raised money for Yigal Amir, the assassin of Prime Minister Yitzhak Rabin, was granted recognition as a tax-exempt public institution, and donors receive a 35% tax deduction in keeping with the laws on taxation. “This way, those donating money to the radical organizations in Israel have an incentive to donate,” Vilder said.

Honenu transferred some 200,000 Israeli shekels ($55,000) to radical right-wing activists imprisoned in connection with terrorism and hate crimes, and 50,000 shekels to their families “using funds that appear to have originated in the state treasury,” according to the report.

The Tag Meir report also says that known radical right-wing activists channel money from seemingly “innocent” nonprofits to organizations of a distinct racist hue that are not registered as NGOs, thus funding their racist ideological activity.

The report also notes that the Od Yosef Chai yeshiva, an ultra-Orthodox, nationalist Jewish seminary headed by Rabbi Yitzhak Ginsburg, received state funding in 2011, but the funding was cut off following intervention by the Shin Bet domestic security agency. Nonetheless, the report’s authors claim the yeshiva enjoys indirect funding it gets through other organizations and nonprofits. By the way, only this week, March 22, police along with detectives of the unit to counter nationalist crimes raided this yeshiva in the West Bank settlement of Yitzhar, arrested two students and issued an administrative restraining order against one other student in order to keep him away from the school.

Most of the organizations examined by Tag Meir are run by the same small group of extremists who help each other in achieving their goals and obtaining funding to promote the radical racist ideology they espouse, according to the report. Gopstein is named in connection with almost all of them, whether as the official director of Lehava or as another office holder such as an “authorized signatory.”

“We know for a fact about a link between Gopstein and the Hemla organization that gets funding from the state budget. There’s a close link between them, and funds and means are transferred from one to the other,” Vilder said.

Another interesting detail that emerges from the report is that some of the money comes from Israeli institutions such as the ORT network of vocational schools supported by the state, or the United Israel Appeal (Keren Hayesod), the United Jewish Appeal and others.

“Why does the ORT network have an interest in channeling money to right-wing groups? That’s an interesting question, also in regard to Keren Hayesod, which openly appears among a list of donors to the Od Yosef Chai yeshiva. This is very strange, but we don’t have any information about how and why money was transferred by them. We don’t have the legal tools to follow all the money trails, but a concerted, comprehensive effort is needed to open this can of worms,’’ Vilder noted.

Tag Meir is now considering handing over its findings to the state comptroller general, who is equipped by law with the required legal tools and means to follow the money trail from the state coffers to various organizations that even the Shin Bet regards as risks to Israel’s security.