As Lehava extremists terrorize Jerusalem, where are the police?

Arab restaurant workers are increasingly being attacked by members of the extremist right-wing group Lehava. 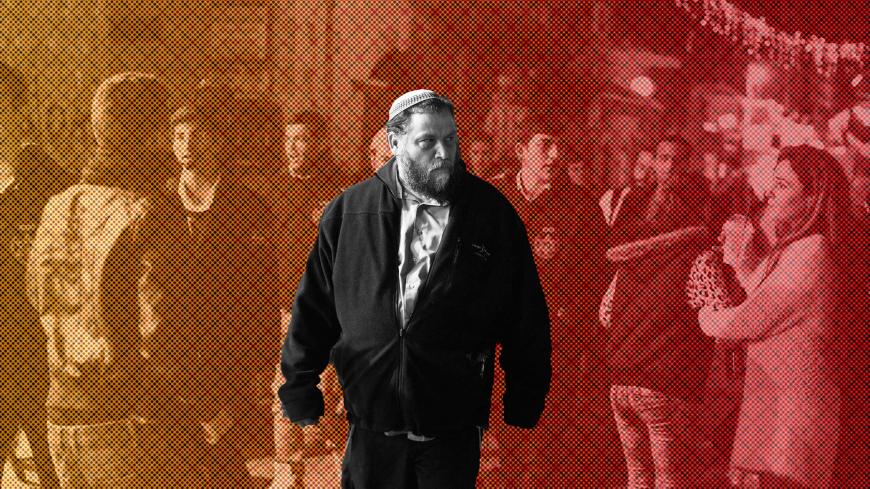 Jerusalem restaurant owners claim that members of the radical right group Lehava — the Hebrew acronym for Prevention of Assimilation in the Holy Land — are threatening them with violence if they employ Arabs. In addition to making threats, Lehava activists have also carried out a series of violent attacks in Jerusalem against Arab laborers, taxi drivers and passersby. The attacks began soon after three Israeli youths were kidnapped and murdered by Palestinians in the West Bank in June 2014, and according to city restaurateurs, there has been a dramatic rise in such incidents since then. They claim that dozens of Lehava thugs go “Arab hunting,” especially on Thursdays, when yeshiva students begin their break for Sabbath, and on Saturday evenings, when they head back to their seminaries.

“It has become routine,” the owner of one of Jerusalem’s better known restaurants told Al-Monitor, requesting anonymity. “Each one of us restaurant owners knows that Thursdays and Saturday nights are terrible days on which we declare an emergency alert.”

Business owners and their Jewish employees are having to physically defend Arab workers and confront the right-wing radicals despite the danger in doing so. “We don’t relax until the last of the Lehava activists disappears from the center of town and the pedestrian mall, and we make sure our workers don’t go home on their own,” the owner said. “We always try to make some arrangement to avoid a catastrophe. Saturday evening is the worst. They [yeshiva students] don’t go back to their schools until they have finished venting their rage on the Arab staff and threatening the employers.”

He added, “A series of brutal attacks by Lehava activists have taken place in my restaurant in recent weeks, because most of my employees are Arabs.” Calls to the police, he said, are usually met with indifference.

Lehava, also the Hebrew word for “flame,” was founded in 2009 by the right-wing extremist Ben Zion “Benzi” Gopstein. Its declared aim when established was to prevent the assimilation of Jews, but over time and in light of the hundreds of people who have joined the group and support it, its activities and targets have expanded. Now the group openly declares on its website that it is agitating for “Jewish work in the Holy Land.” It regards the employment of Arabs by Jewish business owners, or in places where Jews are employed, as leading to assimilation, something that must be stopped at all costs by attacking Arab employees and threatening Jewish employers.

Dan Biron, the owner of Jerusalem’s Birman Restaurant, said that his workers are scared and will not talk to the press. He himself is not afraid to speak out.

“A few weeks ago, one of my workers went to throw out the trash,” he told Al-Monitor. “Suddenly he was punched in the face. When he turned around, two others assaulted him and started beating him up. He left the trash cart and fled. I quickly went out and saw two cops on a motorcycle. I told them what had happened, and they said they would send a squad car. To this day, not a single police car has shown up.”

Since then, Biron said, four more violent attacks have been carried out against his Arab staff. Now he accompanies them when they leave the premises.

Another restaurant owner said he, too, has received threats not to employ Arabs, but they were veiled. “They don’t tell you, ‘We’ll burn down your restaurant,’ but they let you get the gist of what they’re telling you,” he said.

After a number of incidents and the sense among restaurant owners that the Jerusalem police were essentially ignoring the violence and threats by these right-wing radicals, the Israel Religious Action Center, run by the Reform Judaism movement, launched Lehava Is Burning Jerusalem. The campaign is designed to raise awareness about the violence and put pressure on enforcement agencies to combat the phenomenon.

The Reform center interviewed and filmed Arab workers who claim to have been beaten by Lehava activists and described the terrifying experience. They all recalled how the activists came up to them and asked a banal question, like “What time is it?” — probably to ensure they were Arab judging by their accent when they responded. When it turned out their target was in fact an Arab, they threw punches until the victim bled.

Itamar Gvir, a lawyer and Lehava activist, told Al-Monitor that the restaurant owners are lying, saying, “If they have proof of being threatened, why don’t they lodge an official complaint with the police?” He claims the restaurateurs are simply out for publicity.

Biron, on the other hand, says restaurant owners are simply afraid of retaliation. “Even without the Lehava violence, things in Jerusalem are tough for business,” he said. “Restaurant owners don’t want to take the risk of messing with those hotheaded thugs. No one wants their restaurant burned down or damaged.”

Meanwhile, Lehava is expanding its target list. On Sept. 22, Lehava members, led by Gopstein, rioted at the Manofim arts festival in Jerusalem due to the participation of an Armenian church choir. The intruders yelled “These are murderers of Jews” and “Go to Syria.” Responding to the event, the Tag Meir (Light Tag) anti-racism forum organized another evening of choir performances. The forum’s chairman, Gadi Gvaryahu, told Al-Monitor, “We will show up to shed light and spread joy anywhere the thugs of the right come to spread hatred.”

That said, those who should show up first and stop these violent attacks are the police.