Activists of the far-right Lehava have launched a hate campaign against Arab bus drivers. 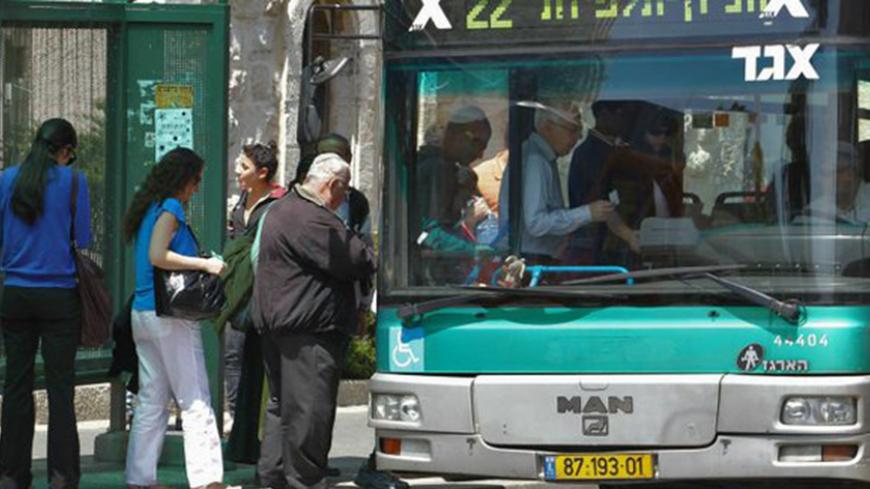 People board a bus run by the Egged bus company. Posted Jan. 18, 2016. - Twitter/@springboardny

The extremist right-wing organization Lehava has launched yet another racist hate campaign, this time against drivers from the Egged bus company, which operates in the West Bank settlements of Ma’ale Adumim and Kiryat Arba, among other places. “Putting the Steering Wheel in Mohammad’s Hands Is Not Good,” a flyer distributed by Lehava activists, claims that more than 90% of employees of the Egged Transport Co-Operative are residents of Jabal Mukaber, the East Jerusalem neighborhood of the Palestinian who drove a truck into a group of Israel Defense Forces soldiers in Jerusalem on Jan. 8, killing four of them.

The flyer directly addresses Malachi Levinger, head of the Kiryat Arba local council, charging that he is not doing anything to stop the employment of Arab drivers. “Are you willing to take responsibility for a terror attack by the driver? Will our girls be able to make it home safely without being harassed? We don’t want Mohammad putting the moves on the girls of Kiryat Arba.”

Lehava was founded by Bentzi Gopstein, a student of the late anti-Arab radical Rabbi Meir Kahane, in 2014 during Israel’s Operation Protective Edge in Gaza. Its declared aim is to fight against what it calls the “assimilation of Jewish women with Arab men.” The group has stepped up its incitement over time. For example, it has called for a boycott of Arab stores and its members have sprayed hateful graffiti on the walls of churches and crashed an art festival in Jerusalem because a Catholic choir was performing.

Gopstein was arrested in December 2014 on suspicion of incitement to racism, and the police recommended prosecuting him. His on-call lawyer, the radical right-wing activist Itamar Ben-Gvir, claimed that Gopstein had been the target of “political persecution” and said the State of Israel should be commending him for the sacred work he was undertaking for its sake.

Ibrahim D., a resident of Jabal Mukaber who asked that his full name not be divulged, has been driving for Egged for two and a half years. Before that, he owned a cab. He told Al-Monitor that he had had enough of being harassed as a taxi driver and felt that passengers refused to ride with him because he was an Arab. “I thought that as a bus driver, I would feel more secure and protected,” Ibrahim said. “But in recent months, even driving a bus has become a difficult and scary undertaking.”

His brother Akram also owned a cab, working mostly in Jerusalem, and he, too, came to the same conclusion: Being an Arab cab driver in a town that had become radicalized was simply too dangerous. “I started driving a cab at the age of 22, and today I’m 64,” Akram told Al-Monitor. “I drove Jews around all my life, some of them became friends and regular customers who would always ask [the dispatchers] to be driven only by me. But tensions in the city have risen, and the hatred has increased. Not among my regular clients, mostly among young people, most of them with kippas on their heads. They look at me as if I have an infectious disease.”

When he was offered a job at Egged, he did not hesitate. Akram sold his taxi and became a salaried bus driver. He says that in recent weeks, some people who did not look like real passengers started getting on the bus in Kiryat Arba, and rather than seeming intent on getting to their destination, they seemed interested in harassing him. “They used to say to me, ‘Hey Arab, who’s the ass who allowed you to hold a steering wheel?,’ and I stayed quiet. I didn’t answer. I’ve been driving passengers for 40 years in the city, and I’ve learned to let things like that pass.”

What makes him the angriest, however, is that only a handful of passengers come to his defense and try to silence the harassers. “Sometimes, some of the passengers join the cursing or just laugh in amusement,” he said. “Many times the word ‘dog’ can be heard on the bus and ‘Terrorist, get lost’ or ‘Go to Syria’ and ‘Let them all die.’”

Akram recounted that after the Jan. 8 attack, several young men got on his bus and cursed him. One even threw orange peels at him. “All of a sudden, an older, ultra-Orthodox woman got up and yelled at them. She stood next to the driver’s seat like a defensive wall,” he recalled. “I drove slowly because I was afraid she would fall. I said to her, ‘Lady, it’s ok. You can sit down. I’ll manage,’ but she refused. I saw her crying with all her heart, and I kept myself in check not to cry with her. When she got off at the stop in Kiryat Arba I said to her, ‘Thanks and may God protect you,’ and she answered, ‘You take care of yourself, and I ask your forgiveness.’”

His brother Ibrahim added that after each “nightmare ride,” as he describes the ones on which he is harassed, he reports the incident to his bosses at the bus company, but he claims a complaint has never been filed with police. “We learned to live with this and hoped it would pass, but it hasn’t, and it’s just gotten worse,” he stated.

Ibrahim further said that passengers often get off the bus after realizing he is an Arab, even telling him that they don’t ride with Arab drivers. “That’s the extent to which the hate has gone to their head,” he remarked. Akram said he can understand the fear of such passengers after the Jan. 8 attack, but added, “Those who don’t know [better] think that everyone in Jabal Mukaber can carry out a terror attack. I can tell you with certainty that 99% of the neighborhood residents were shocked and hurt [by the attack]. We live between two worlds. All of my family stays away from violence and trouble, but a cruel reality bedevils us and ruins our lives.”

In the wake of the hate-filled flyer, the Egged drivers union lodged a complaint of incitement with the Jerusalem police. Judging from past experience, however, one can assume the Lehava activists will get away with it.