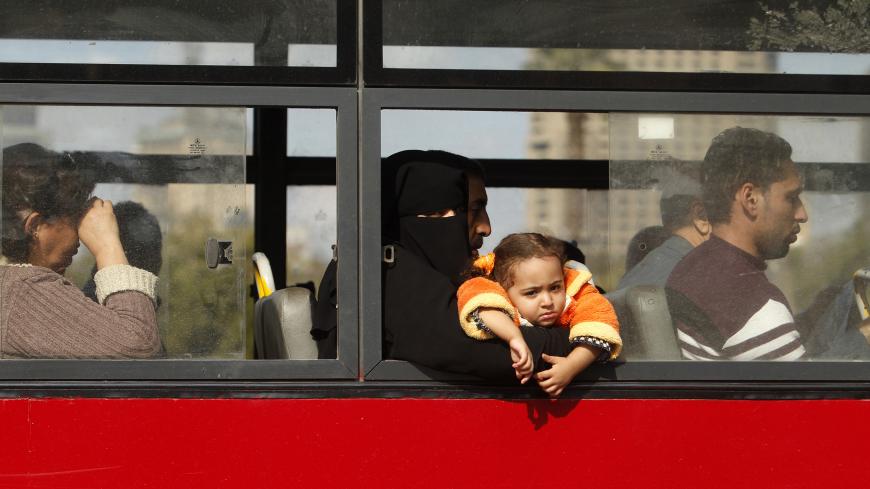 The sight of a niqab-clad woman driving a full-size bus in Cairo’s congested streets during rush hour has left commuters and pedestrians in the Giza district open-mouthed. But Umm Abdalla, Egypt’s first female bus driver, is unfazed by the stares of curious onlookers.

“People stare anyway, no matter what you are wearing or what you do. Some are nosy by nature, others are simply curious. I just take it in stride,” she told Al-Monitor.

The 42-year-old widow and mother of five said she never intended to become a bus driver.

“It happened because I was desperate for a job and they were recruiting,” she said. “They” are the private English Mass Transit Company that hired her a little over a month ago. The company, contracted by Cairo’s Transport Authority (CTA) to operate buses within the CTA, had advertised openings for bus drivers in a local newspaper. By chance, the English Mass Transit Company recently introduced a female-only bus service to protect women from sexual harassment, a rampant problem in Cairo.

“With no education or skills, my chances of finding a decent job were slim. A neighbor told me about the job ad for bus drivers. The ad stated that the company would train potential candidates before hiring them and that prior bus driving experience was not required,” Umm Abdalla said.

It took her a little over a month to learn how to drive a bus, though she had never sat behind the wheel of a car or any other vehicle before. She was thrilled when she passed her driving test. “The commercial license gave me a new lease on life, as it meant that I could finally earn a livelihood and keep my children in school,” she said.

An October 2017 Thomson Reuters poll named the city “the most dangerous” for women of 19 megacities surveyed. According to a 2013 UN Women report, 99.3% of Egyptian women have faced some form of sexual harassment on the street, with 81% of the harassment occurring while women were using public transportation. An anti-sexual harassment law adopted in the summer of 2014 has done little to deter harassers, although it has encouraged more women to come forward and report harassment to the police, according to Egyptian media reports.

“Women feel unsafe on buses, especially during rush hour. That is why we hired Umm Abdalla for our new women-only bus service on the busy Giza Square-Pyramids Plateau route during peak hours,” said Omar Sayed, the deputy director of the company that runs the bus service. “We’ve also hired a female conductor so that the service would have an all-female staff.”

Driving in Cairo’s chaotic traffic can be “a daunting challenge,” according to Umm Abdalla, who said she had been nervous about starting the new job. “I was encouraged, however, by the praise lavished on me by some passengers. Several told me on my first day that they’d enjoyed the ride and that I’m a role model for other women,” she said.

While the female-only bus service is a novelty in Cairo, the city already has women-only subway cars. Female commuters using the Cairo Metro have the choice to share cars with men or travel in ones reserved exclusively for them. Most women feel more at ease using the latter, and these carriages are often packed as a result.

The concept of gender segregation on buses was first introduced in Egypt in the Nile Delta city of Damanhur in December 2015, not only as a tactic to combat sexual harassment but also because of complaints from women that they had had difficulties using public transit during rush hour. The women had been unable to board buses when male passengers pushed them aside to board themselves.

Unlike Damanhur’s female-only bus service, praised in the Egyptian press as “ensuring safe and comfortable travel for female commuters,” Cairo’s new bus service has generated heated debate in both the mainstream media and on social media networks. The controversy goes beyond segregation, as critics also question whether a niqab-wearing bus driver with little driving experience poses safety risks on the road.

Other internet activists expressed their reservations about the decision to allow a fully covered woman behind the wheel at a time when Egypt is at war with IS-affiliated terrorists.

“Passengers have the right to know who is driving them,” stated Nadia Lamloum, executive director of the British-Egyptian Businessmen’s Association, in a comment on Facebook.

Others used the social media network to express their admiration for Umm Abdalla, commending her for her bravery and resolve. Many female passengers using the service also praised the bus company’s decision to hire a female bus driver as a sign of “keeping up with the times.”

“A female driver is as good as any male driver. I feel safer and more comfortable on the women’s bus as I no longer have to worry about harassers groping me and pretending they had touched me by accident,” said Karima Mohamed, who has been using the service daily to commute to work.

“We can talk freely and discuss women’s issues without having to worry about a male driver overhearing our conversations. I can trust Umm Abdalla with the safety of my children,” said Hoda Abdel Monem, another passenger who uses the service daily to take her two daughters to school.

But in a country where simply crossing the street can be risky and the number of road accidents exceeded 14,000 in 2016, skeptics fear that entrusting an inexperienced bus driver with passengers’ lives may be an “unnecessary gamble.”

“While a college education may not be required for this profession, bus drivers ought to at least be able to read and write to understand the road signs. They need to undergo sufficient training on safety regulations, vehicle inspection and first aid. Having good communication skills is an added advantage,” said Wael Abdel Meguid, the acting general manager of Egypt’s Automobile and Touring Club, founded in 1924 to cater to Egypt’s foreign community. Today the club offers a range of services to the public, including promoting road safety and issuing international drivers’ licenses.

The authorities plan to introduce a new points system that would impose harsher penalties for violators of traffic regulations in the hope of curbing traffic accidents. According to an amendment to the country’s traffic law — approved by the Cabinet in mid-October and currently under review by the State Council — drivers would have a certain number of points deducted for each violation they commit. Frequent violators whose points have run out stand to have their licenses temporarily or permanently suspended, depending on the gravity of the offense, and would have to enroll in an accredited driving school to get their licenses back. The proposed bill also imposes heavy fines on traffic violators.

Umm Abdalla, meanwhile, is grateful for the opportunity she has been given by her new employers and vows to work hard and prove she is as capable as her male counterparts.

“There is a large support network for me from the other drivers. The best place for me to learn is right here, on the job.”