Pink taxis seek to put brakes on harassment of women

One Egyptian is bringing the "pink taxi" initiative to his country, a project to offer women safer and more comfortable public transportation. 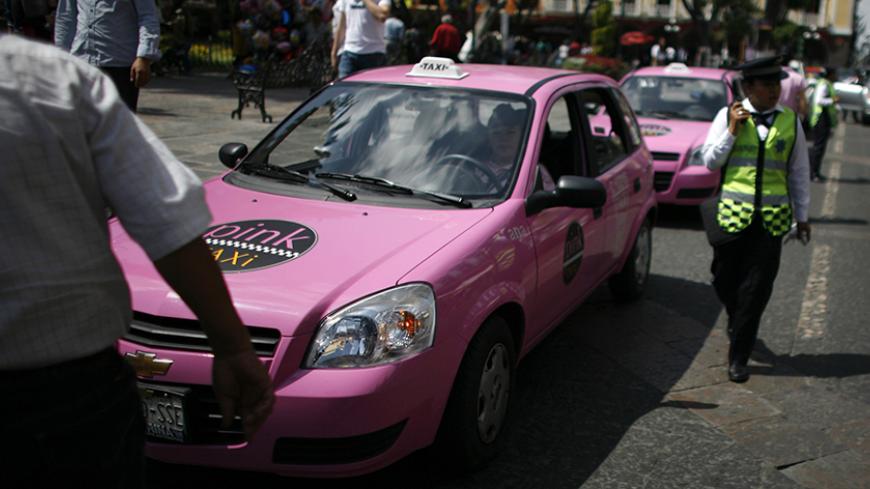 CAIRO — Egypt's new pink taxis are being hailed as one more weapon in the battle against sexual harassment and violence toward women.

After finding success in several countries across the world — such as the United States, Turkey and France — the pink taxi has arrived in Egypt. The pink car experience lets women drive women to their destinations to protect them from potential sexual harassment or attacks. The cars are equipped with a GPS service to track the vehicle’s movement and a counter to calculate the fare.

Al-Monitor conducted several interviews that show a huge gap between supporters of this idea — which they consider an opportunity to limit harassment — and opponents, who believe it encourages further segregation of the sexes.

As violence against women has surged in Egypt, initiatives to address it are increasing. Among them are “Shoft Taharosh” (“I Saw Harassment”), a campaign to mobilize people against sexual harassment, and “Entkallami” (“Speak Up”), which encourages those who have been harassed to write about what happened to them. There is also “Harass Map,” which encourages women who have been harassed to report the incident.

A study conducted by Thomson Reuters in late 2013 pegged Egypt as the worst Arab country for women to live in due to harassment.

Although pink taxis are not new and the idea is already being tested in several countries, it is still unclear whether they will succeed or fail in Egypt.

“Some women refuse to take taxis with men for fear of harassment or because their husbands forbid them from taking taxis with a male driver," said project founder Khaled al-Aryan in Sheikh Zuweid city.

Discussing the idea with Al-Monitor, Aryan said the project provides job opportunities to women. Eight women currently work with him. Women can be drivers even if they don't have their own cars, but they must complete training and comply with certain rules — mainly security measures — such as submitting a judicial record to verify that they have not committed any crimes. They learn how to deal with clients and address driving-related problems such as technical defects and even harassment.

Aryan expects that within six months, the project will expand to all regions of Cairo and Giza, except for the slums, as most of those areas are “crowded and the roads meandrous,” he said. He described the experience as unique. “It is a new technology that uses applications downloaded from the Google Play store on any mobile phone, and bookings can be done at any time.”

Many women support the project, he said, because it prevents harassment and violence and it pays well, which encourages women to work.

Hala Fouad was the first female driver hired for the service. She told Al-Monitor that the project protects women from constant harassment in the streets. “I don’t see any problem with women working as drivers; it is an opportunity to boost safety, be it for Egyptian or foreign women.” She added, “The task is tough, though, and requires time and effort.”

However, Azza Kamel, a women’s rights advocate and head of the Appropriate Communication Techniques for Development Center, told Al-Monitor that the pink taxis skirt, rather than solve, the issues of harassment and violence against women.

“The solutions are temporary and at the discretion of the project founder. If the [founder] decides to end the project, women who relied on it for transport would be harmed,” Kamel said. The project’s main flaw, she said, is that it segregates the sexes, and women and men have the right to live together safely in the streets. Egyptian society is for both men and women, she noted.

Another expert, however, expects just the opposite. Fouad al-Said of the National Center for Social and Criminological Research sees the pink taxis positively, as some women are now applying for jobs that were restricted to men — a step that encourages equality between men and women.

According to Said, the project might also change men’s perceptions of women as weak. “I disagree with the theory that the project separates the sexes. Under certain circumstances, in jammed cities, searching for practical solutions is the only way out,” he said.

He cited the subway service, which includes women-only cars during rush hour. “If it weren’t for these cars, we would have witnessed many harassment cases,” he said.

One problem with the project is that not everyone can afford to take a taxi. Some critics worry that service providers might seek inflated profits and use women’s suffering in the streets to their benefit.

Another interesting challenge the service faces is a legal one. The cars are currently officially called "pink cars" rather than "pink taxis," because Egyptian traffic law stipulates that taxis must be “white with black checkers."

Al-Monitor has learned there are other similar projects underway, but the founders refused to reveal further information as they wait to obtain official permits from the General Traffic Department that are not guaranteed.