Why some Turkish women are boycotting women-only taxis

A number of women have welcomed Turkey’s first women-only cab, but many activists reject the new service as further gender segregation in public life. 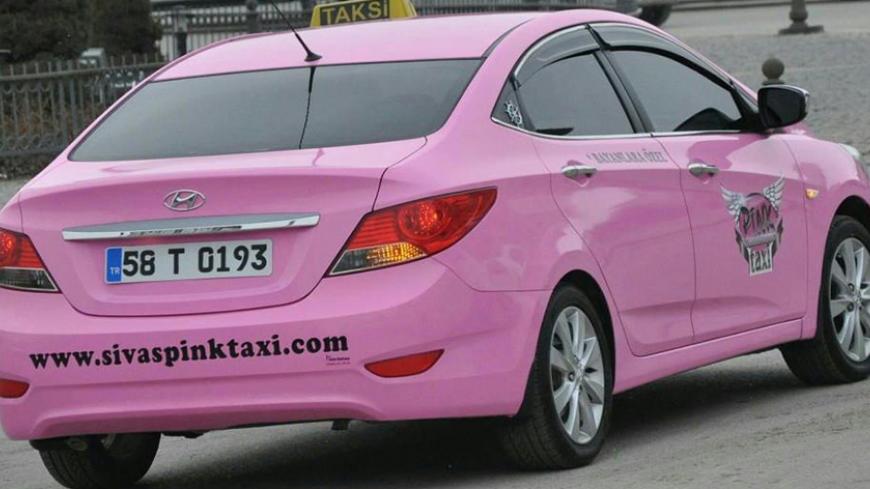 For the first time in Turkey, a “pink taxi” — catering only to female passengers and driven by a female driver — hit the roads in February. The single cab, operating in the central city of Sivas, has been met with great interest by local women, while sending women’s rights groups up in arms.

The pink taxi is owned by local operator Gokhan Simsek, who obtained a license for his venture last month. The municipality not only gave it the go-ahead but got involved in its promotion with a grand inauguration ceremony. The new service, however, stirred passions in a society where the gruesome murder of a university student in a public transportation vehicle last year has left a lasting scar.

The public outcry against rising violence against women in Turkey boiled over in February last year after the charred and mutilated body of Ozgecan Aslan was found outside the southern city of Tarsus. Aslan, 17, was the only passenger on a privately operated minibus, whose driver attempted to rape her and, when she resisted, stabbed and battered her to death before cutting her hands and burning her body with the help of accomplices. The incident triggered a wave of demonstrations across the country and national mourning. While raising awareness of sexual harassment, Aslan’s murder also sparked fear and anxiety among women about using public transportation. The public debate at the time was marked by the narratives of women who either feared to board empty buses or hurried to get off early to avoid traveling alone with the driver.

A year later, the issue of safety on public transportation remains under the spotlight. Service providers have moved to step up controls, but the success of their measures is questionable. A few months ago, for instance, the Minibus Drivers’ Chamber in the Mediterranean city of Antalya tested hundreds of male members for drug abuse. The urine tests established that 40 drivers were drug abusers, while one was found to be “pregnant.” This surprise discovery showed that at least one driver — and probably others — had managed to submit urine samples from their wives, casting doubt on the efficiency of controls.

It was against this backdrop that the pink taxi hit the roads. No wonder it sparked indignation, as many women saw it as a sign that efforts were focusing on protecting — and isolating — women rather than fighting harassment and rape.

In an interview with Al-Monitor, Simsek insisted his venture had nothing to do with Aslan’s murder. “My female clients go to hammams or swimming pools. They come out sunburned and sweaty, and don’t want to be seen like this by male drivers,” he argued. “That’s how I came up with the pink taxi idea. Similar examples exist in other countries as well.” Simsek said the cab is off limits to men because of the possibility they might harass the female driver. “I believe pink taxis will become widespread across Turkey within a year,” he said, adding that he's had numerous calls from others keen to follow his example.

The Sivas Women’s Solidarity Group held a demonstration in the city to protest the new service. The group’s spokeswoman, university student Derya Ulucan, told Al-Monitor, “This taxi will be out of service after 8 p.m., which is equivalent to telling women not to go out after 8 p.m.” Simsek, however, argued that the limitation stemmed from his failure to find a female driver willing to work after 8 p.m.

For Ulucan, the pink taxi service promotes segregation and encourages the stigmatizing of women in social life. “Sexual harassment and assault against women who take yellow cabs will gain legitimacy,” she said. “Once in court, the perpetrators will argue the victim chose a yellow cab instead of a pink one, leading them to think she was asking for it. Haven’t we witnessed similar cases in the past?”

Asked about how women in Sivas received the pink taxi, Ulucan said, “They are actually happy with it, but when we talk to them their awareness increases. This is a profit-oriented commercial project, targeting the whole country. Sivas was chosen as a pilot region because it is a conservative province. I don’t think this practice can be adopted in big cities, but in conservative places it will go ahead.”

Ulucan’s main concern is the “dangerous trend” she believes the pink taxi represents. “In the name of protecting women, we have a women-only taxi today. Tomorrow, they will use the same argument to launch women-only buses. And after a while there will be women-only schools. This is a dangerous trend,” she said.

The debate goes on, but its essence remains unchanged: Male-sponsored services with the stated aim of “protecting” women are increasingly fueling women’s concerns of discrimination. Even if one accepts that the pink taxi’s inauguration amid rising fears of sexual harassment was just a coincidence, women’s interest in the new service cannot be explained outside this context. That Turkish women, fearful of harassment and rape, have come to avoid public transportation and welcome women-only services is an indication of how unsafe their environment has become.

The pink taxi led to a protest campaign on social media, with one slogan amply summarizing the sentiment: “We are not going to use pink taxis, men are going to learn to be human.” This statement clearly shows that what women want is not special services, but the freedom to benefit from existing ones without fear for their safety, just as men do.