Iraqi women push for cafes of their own

Iraqi women have started opening women-only cafes and restaurants where they can just avoid harassment. 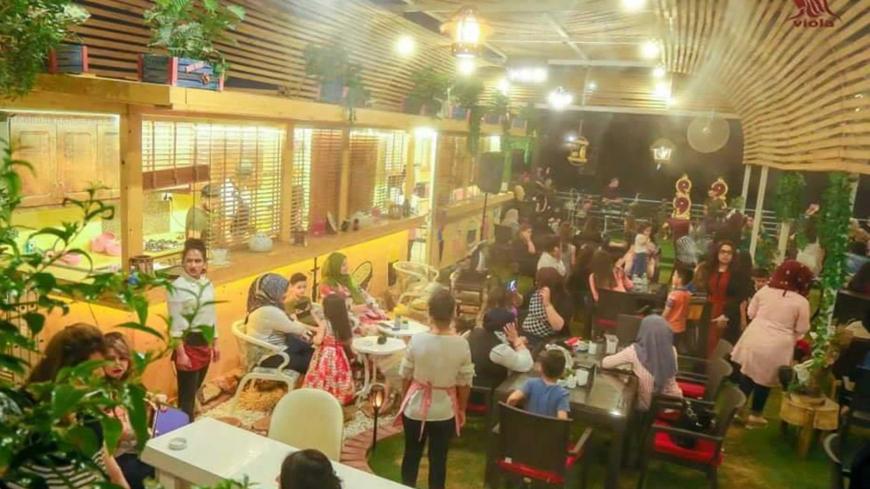 As all-women cafes mushroom in Baghdad and the rest of Iraq, women’s views are divided whether these are pockets of freedom from sexual harassment or the embodiment of segregation.

“It is important for us to sit at ease in a calm place, away from the guys’ [unwelcome] looks and indirect harassment. I am pleased that I can frequently visit such a cafe,” Zahraa Saad, one of the patrons of Viola Cafe in Baghdad, told Al-Monitor.

Saad, 29, works for an investment company in Baghdad. She sees Viola Cafe, which opened in July, as a place where she and her friends can enjoy some freedom and privacy. “Although I do not agree 100% with the idea of segregation as it will further deepen the gender gap, I believe that there should be women-only cafes and restaurants,” she said. “Choosing to go to such a cafe or restaurant does not mean that I do not want to communicate with my male friends and colleagues. It is however a chance for me to stay away from men and their problems.”

Women-only cafes and restaurants in Iraq have come at a time when increasingly more women-led cultural activities, such as book clubs, are organized around the country. Women’s integration into the society and economic life and women’s empowerment are also encouraged through international programs, such as preventing early marriage or securing legal aid for women subjected to domestic violence.

Viola Cafe suffered a setback when its owner and manager Rasha al-Hassan, also a well-known beautician, was found dead in her home on Aug. 23. The cafe is still open, but its employees are reluctant to talk to the press.

“I am happy to have worked at this cafe for over a month. But I have been hesitant [to continue] ever since the owner died,” an employee who asked not to be named told Al-Monitor. It seems that for customers like Saad, the owner’s death is no reason to stop going to the cafe.

The employee recounted the first days following the cafe’s opening in July, describing the place as “cosy” and customers “very responsive.” She said, “The cafe is hosting an increasing number of female customers and they all welcome its opening.”

Hassan, the owner of the cafe, had told the press of the niche for women-only cafes and her plans a few months before her death. “I love being the person to bring this experiment [of an all-women cafe] to Iraq, as I have seen them in a number of Arab countries," she said. “Iraqi families are mostly conservative and not all women are able to go out to mixed-gender places. That's the reason we opened a place where customers can find privacy.”

Sexual harassment of women in public places is also a motive behind the all-women cafes and restaurants. This is what prompted Tara Mohammed to open on Aug. 28 the first women-only restaurant, Luxury Time, in Erbil.

Mohammed herself has been the victim of sexual harassment in the past. She told Al-Monitor that men have attempted to enter the restaurant and that she is planning to hire a security guard. “I [wanted to open] a place where women can be at ease without being harassed. This will allow them to have a good time and feel comfortable away from [social] restraints and stares.”

She added, “I hope it is the start for future projects of this kind so that women can enjoy themselves and relax.”

Saeed Kareem, a researcher for the Iraqi Ministry of Labor and Social Affairs, told Al-Monitor, “Sexual harassment of women and girls is a reason for women to launch these kinds of projects. This is the right way of thinking — it does not restrict the freedom of women and it fends off sexual harassment.”

He said, “Yet eventually we must end sexual harassment; segregation is not a solution to curb sexual harassment. Ongoing dialogue between the sexes in the workplace and in society is a must.”

Iraqi women are not just patrons of all-women cafes; they actively participate in the restaurant business. In the city of Hilla in Babil province, a group of women currently manages Abjad Center, a family cafe, which also organizes cultural activities. Similarly, Finjan Restaurant that overlooks the Tigris River in Baghdad has employed all-female staff since 2010.