Why can't Gazans drink their tea in peace?

Security services in Gaza are implementing heavy and exaggerated measures in cafes and public spaces, dealing with clients as suspicious persons, so have they crossed the line? 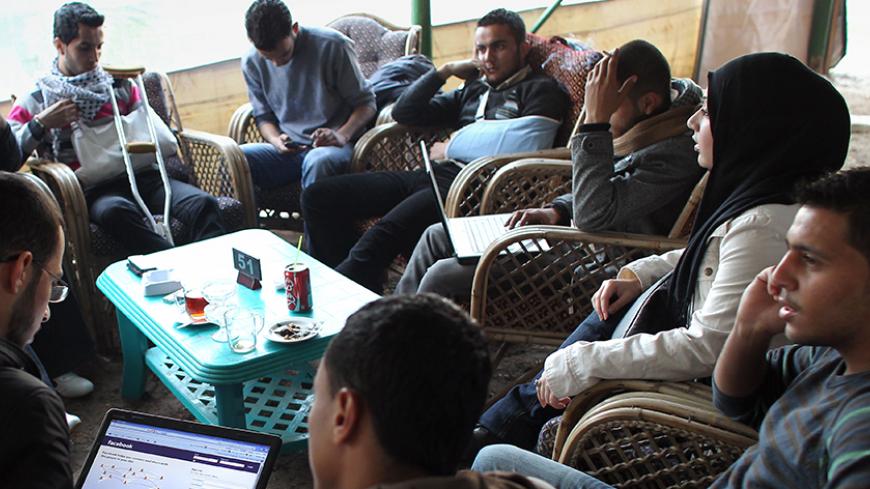 GAZA CITY, Gaza Strip — Sometime last year, Hanan Omar, a journalist from Gaza City, sat at a popular outdoor cafe preparing to interview an activist about prisoner affairs. She had no idea that sitting in public would land her in police custody.

“As I was getting ready to start the interview, detectives arrived at the café,” Omar (a pseudonym) told Al-Monitor. “Of course, there were dozens of young men and women [there]. The security officers escorted me out, along with the person they wanted, who happened to be the person I was about to interview. They interrogated me about the nature of my relationship with that person, and I explained that I was a journalist, but nobody listened.”

Khalid Mustafa (a pseudonym), a photographer and journalist from Gaza City, commented on how detectives are frequent visitors at the cafe he visits daily to wrap up his work. He said they drop by under various pretexts, such as preventing girls from smoking hookahs.

“We sit in an outdoor, popular cafe,” Mustafa explained. “It is quite modest, and we sit in front of all the clients who come from inside and outside Gaza. Although the cafe’s management has set up surveillance cameras all around, the tourism detectives, affiliated with Hamas’ security services, often come and prevent girls from smoking hookahs and impose restrictions on the cafe’s owners.” Mustafa sees these visits as attempts by the security services in Gaza to intimidate people through surveillance and harassment, while refraining from imposing direct prohibitions.

Samah Ahmad, another journalist, doubted the need for such security personnel in public places. “What is suspicious about an outdoor, popular cafe?” she asked. “I do not know why it is so important to have security officers there. The security services have the right to follow up on all sorts of things in light of the serious security situation, but being overly present in cafes raises questions.”

Ahmad said that even the presence of a single security officer at a cafe would be enough to raise questions, but there are often several of them in or around such establishments. Jamil Suleiman (a pseudonym) said that for the last month and a half, security services have been harassing patrons at his café, which he opened in 2002.

Article 26(5) of the Palestinian Basic Law stipulates the right “to conduct special meetings without the presence of police members, and to conduct public meetings, processions and assemblies, within the limits of law.” Restrictions on cafes and people gathering there are nothing new. According to the Palestinian Center for Human Rights in Gaza, in September 2010, the Interior Ministry closed down a number of tourist spots, including resorts, cafes and restaurants near the beach, on the grounds that men and women were sitting together and other alleged violations of Islamic customs. In the meantime, detectives are now being deployed and females are prohibited from smoking hookahs.

Suleiman told Al-Monitor that before Hamas took control of Gaza in 2007, cafe owners might have had financial issues with their municipality, but the situation is now worse. “They imposed many restrictions,” Suleiman said. “We were detained and forced to sign mandatory pledges. We were even referred to the public prosecutor’s office several times and fined on various charges, most notably serving hookahs to girls, although there are no laws prohibiting this. This is why we stopped serving them.”

He also said that security officers recruit girls who had been arrested for immoral acts to help surveil cafes. “They recruit these girls as spies to catch young men,” he explained. “They make them sit in cafes and watch the clients and take pictures, especially of girls smoking hookahs, but we discovered them later on.” Suleiman said security officers visit cafes daily, but only for a short time, unless they are monitoring specific individuals, noting that they mostly focus on journalists to restrict their work.

Lt. Col. Ayman al-Batniji, police spokesman in Gaza, described some cafes as “suspicious dens,” particularly those along the Gaza beach, away from central Gaza. He said that authorities are in the process of moving them to open areas. When asked about “suspicious” activity, he told Al-Monitor, “A security agent and a civilian see things differently. I would find it suspicious to see a man sitting with his wife smoking a hookah on the street, since married couples usually do this in the confines of their home.”

Despite several incidents of young women or men without a legal bond being arrested for sitting together in public, Batniji said that if they are sitting in a respectful manner, then there should not be a problem. He admitted the existence of “spies and detectives” to protect public safety, stating that their presence in cafes is as normal as their presence anywhere else because it falls under the context of maintaining security. He added, “There are certain places frequented by drug dealers and suspicious persons that are unfortunately seen by citizens as respectable places.”

Regardless, the surveillance in cafes has some Gazans questioning whether the security services in Gaza are overstepping their bounds and violating people’s privacy and rights.