Policemen are regularly intruding into beach cafes in Gaza, targeting a range of "vices" from women smoking argileh to boys and girls walking together on the beach. 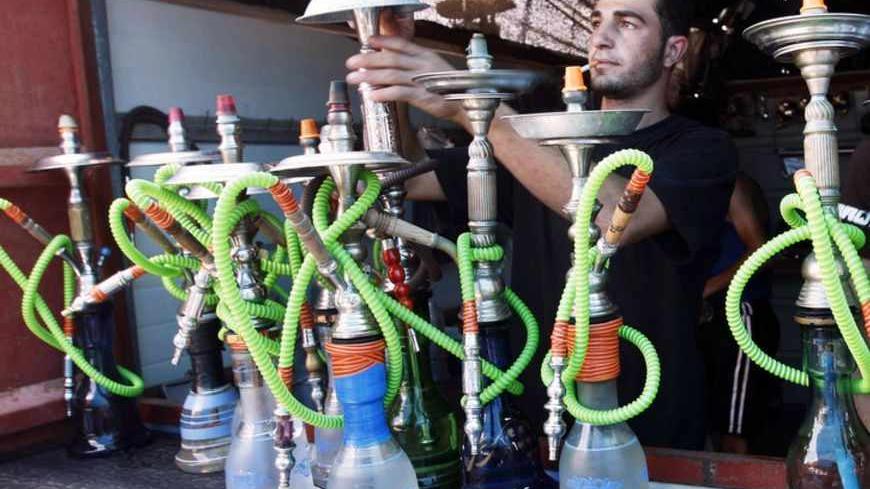 A Palestinian vendor prepares hookahs at his shop on the beach of Khan Younis in the southern Gaza Strip, May 31, 2009. - REUTERS/Ibraheem Abu Mustafa

When W., 21, went to the beach with her friend, the last thing she expected was Hamas policemen rushing into the beach cafe where she was sitting and forcing the waiter to remove the argileh — the Middle Eastern hookah — she was smoking from her table.

W., who wished to remain anonymous, expressed her annoyance at what happened, adding that she just had wanted to take a seaside break from her exam preparation.

The owner of the cafe, who preferred to go under the alias Khaled, told Al-Monitor that this was only one case out of dozens that regularly happen.

“The police jeeps never leave the area around the beach, just looking for a girl smoking argileh or a couple sitting together there,” Khaled said.

Khaled said that all he can do is ask the policemen to prove their identities; otherwise, he is powerless to stop their meddling in his customers' personal affairs.

With summer approaching and temperatures rising, more Palestinians in the impoverished, besieged coastal enclave head for their only open-air, natural summer escape: the sea. And accompanying the summer season is a concerted government campaign to monitor people's commitment to Hamas' interpretation of Islam.

Such incidents began in 2009 — two years after Hamas took over the Gaza Strip by force — when Hamas announced a “virtue campaign” that aimed to verbally exhort people to follow the Islamic commands.

But the campaign later escalated to direct interference in people’s personal affairs. Human rights organizations regularly document incidents where couples are stopped in the street and asked for their marriage certificates.

Hamas usually launches campaigns when it wants to target a specific social phenomenon. In January, it launched a campaign against collaborators with Israel, one that was largely welcomed by Palestinians in Gaza.

At the entrance of another cafe at the same beach hung a warning exempting the cafe of responsibility if the police prevent women from smoking argileh.

The owner, who also refused to give his name, said that his business partner was arrested this week when police "caught" a woman smoking argileh at his cafe.

“He was arrested, but released after 24 hours. I myself signed a pledge not to serve argileh for women again,” the owner told Al-Monitor before the interview was interrupted by policemen entering a male-only cafe just across the street.

As a crowd amassed around the cafe to see what was happening, dozens of policemen were seen by this correspondent entering the cafe and searching all customers for drugs.

One customer angrily left the cafe with his laptop, his hair in a messy state after being roughed up by the Hamas policemen.

“They asked me to take everything out of my pockets. I did, but then they asked me to raise my hands for a pat-down search. When I refused to obey, they started beating me,” H. told Al-Monitor.

H., who also wanting to remain anonymous, said that when he asked the policeman if he had a warrant to search him, the policeman slapped him in the face.

“After the slap, the other policemen hurried and started beating me with cafe chairs,” H. explained.

Earlier this week, the Hamas-run Ministry of Interior (MOI) launched a campaign against drugs, in particular the Tramadol painkiller as reported by Al-Monitor, which has become popular in the Gaza Strip and is smuggled through the tunnels beneath the Egyptian border.

Yet, the MOI insisted that the campaign would be educational to raise awareness of the drug.

Police spokesman Ayyoub Abu Shaar denied that the police obstruct the work of the beach resorts and cafes, so long as there is no illegal activity.

When asked if women smoking argileh was illegal, Abu Shaar said that it was not, resorting to the often repeated Hamas position that such police acts are individually carried out and not part of a systematic campaign.

“We rarely hear about cases where couples are being questioned about their relations or women banned from smoking argileh, and if it happens, it’s usually an individual action and not a systematic one,” Abu Shaar said.

Head of the media office in the Hamas government, Ihab al-Ghussein, stressed to Al-Monitor in an interview on May 29 that there was no official policy to “Islamize” the Gaza Strip and that Hamas would “never force people” to adhere to Islamic law.

Ghussein added that punishments were handed to police who overstepped their responsibility.

Al-Monitor managed to see a document, as revealed by Abu Shaar, which showed one of the policemen being put in prison for three days after questioning a girl and boy sitting in a public garden.

Mahmoud Omer, 22, was walking on the beach with his female friend when he was stopped by a policeman asking about the relationship between them. The policeman then requested the phone number of the girl's father.

“I think what happened was an act of aggression, and I think it must stop. No one should be treated that way. The policeman should be punished, and such action should come to an end,” Omer said.

Human rights activist Mustafa Ibrahim stressed that Hamas’ continued interference in the private affairs of Palestinians is a major human rights violation and must cease.

“I don’t think these campaigns aim to reduce vices among people in Gaza. It’s clear that they were meant to be an excuse to interfere in people’s personal issues,” Ibrahim told Al-Monitor.

The Hamas crackdown is also hurting business. Khaled noted that continued police intrusions into his cafe are forcing customers to stay away.

“Usually, when I refuse to serve argileh to a girl who's part of a group, the whole group leaves, preferring to go to an indoor cafe,” Khaled explained.

Khaled said that nothing is more embarrassing than having to take an argileh back after a female asked for it, losing business in the process.

“If things carry on this way, I don’t think I’ll make any profits this year.”