A young man was caught on video sexually harassing a woman at Rafah, raising fears that the phenomenon of sexual harassment experienced by Egypt might spread to Gaza. 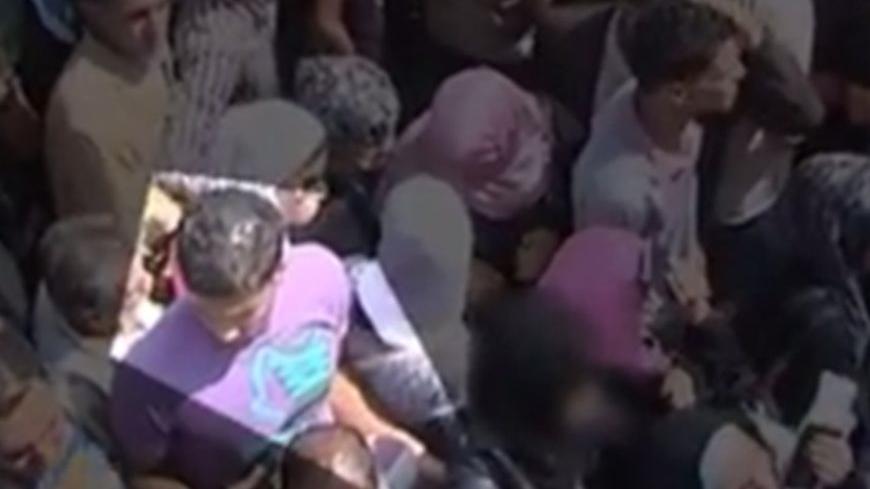 A still from video of the incident highlights the alleged perpetrator at the Rafah crossing in Gaza, Sept. 29, 2013. - youtube.com

On Oct. 1, Shahed Abu Salama, 23, eventually crossed through Egypt's often closed border on her way to Turkey, a week late for her scholarship studies. She had been delayed not because of the routine difficulties of crossing the border, as hard as that is today, but because she was sexually harassed on Sept. 29 by a young man among a mob of stranded students trying to storm a secured gate at the Rafah crossing point.

In a bid to demonize Hamas’ treatment of civilians, Fatah, which controls the Palestinian Authority in the West Bank, exploited the incident by posting the last moments of the abuse on YouTube, showing a Hamas police officer scuffling with the offender. The video was taken down not long after Hamas released its own edited, slow-motion version showing Abu Salama pushing the offender and said that the policeman had intervened to punish the abuser. On her Facebook page, since removed, Abu Salama thanked the policeman who had hit her abuser.

After the video went viral, Hamas facilitated Abu Salama’s travel as a reward for her outspoken critique of the incident. This has been a much discussed issue in Gaza, but what stole the spotlight was not that a woman was sexually harassed, but the tit-for-tat between Hamas and Fatah.

Video of the incident posted by Hamas (youtube.com)

There are many untold stories about sexual harassment in Gaza, home to 1.7 million Palestinians. In a conservative society such as Gaza’s, female victims of sexual harassment seldom speak out, and when she does, society usually places the blame on her. Although Hamas-affiliated media hid Abu Salama’s face due to such concerns, she bravely disclosed her identity on her Facebook page, acknowledging that she was the person videotaped. “I’m not the one who should feel ashamed, only him and everyone like him,” read Abu Salama's post.

Males and females have little interaction in professional settings in Gaza. Gender segregation begins in elementary school at age eight. With Hamas’ takeover of Gaza in 2007, restrictions on gender relations were tightened. Many couples have been subjected to questioning for being in public together.

Unlike neighboring Egypt, where there have been a number of incidents of public sexual harassment, this is not common on the streets of Gaza, which has tight-knit communities with few strangers. Verbal harassment, however, is a common occurrence that women have learned to live with.

Zaheya Khalil, a psychiatrist at the Gaza Mental Health Program, attributed the growing phenomenon of harassment to the social, psychological and financial hardship Palestinians in Gaza are experiencing.

“Most of those who harass girls are from the youths who are supposed to use their energy in the right place, yet lack of education and employment opportunities can push them to such behaviors,” Khalil told Al-Monitor in a phone interview. According to the most recent statistics published by the United Nations Relief and Works Agency, Gaza’s unemployment rate in 2010 was estimated at more than 45%, one of the highest in the world.

Since public and physical sexual harassment is uncommon in Gaza, the YouTube video became the talk of the town. Social media users shared the video for either supporting Abu Salama or blaming her for standing between men. Women are often accused of being the guilty party in cases of sexual harassment because of the way they look, dress or behave. Rarely, in Gaza's patriarchal society, are fingers pointed at the men, the actual perpetrators of the harassment.

Khalil referred to societal guilt as a key perpetuator of sexual harassment. Because women often remain silent, the men who commit such acts take this as an opportunity to offend again. “Women are always worried about their reputation. This is enough reason for them not to speak up,” Khalil pointed out.

As head of an Islamic government, Hamas seeks to curtail incidents of sexual harassment. For example, it usually deploys police patrols around girls secondary schools at the end of the school day. Hamas police spokesman Ayoub Abu Sha’ar played down fears that Gaza might experience a sexual harassment phenomenon similar to that witnessed in Egypt. “The few cases we had of sexual harassment only show that we have some unbalanced people. It’s not a general [problem],” Abu Sha’ar told Al-Monitor.

Prominent human rights activist Mustafa Ibrahim argues that the failure to address sexual harassment does not stem from the law, but from the silence of the victims. “Sexual harassment can never be considered by the law unless the girl officially complains at a police station, but she prefers to stay silent most of the time due to social stigma,” Ibrahim clarified.

Another problem is that sexual harassment often occurs in the home, perpetrated by male relatives, making it even harder for women victims to speak out. Khalil revealed, “Of the cases I happened to encounter during the course of my work, more than 70% of the victims were harassed by their relatives, yet they always preferred, or even forced by their husbands, to stay silent lest they should be accused of immorality.”

A 24-year-old teacher who spoke on condition of anonymity said that no matter how much people in Gaza try to deny the existence of sexual harassment in their community, every single girl in Gaza has experienced some type of harassment.

“I don’t expect anyone to stand by me. All they will do is to look at me as a bad girl and start gossiping. I don’t want this.”

Abeer Ayyoub is a columnist for Al-Monitor's Palestine Pulse. She graduated from the Islamic University of Gaza with a BA in English literature. She is a former human rights researcher turned journalist whose work has also appeared in Al Masry Al-Youm, Al Jazeera and Haaretz. On Twitter: @Abeerayyoub