A project by artist Yasmeen Mjalli encourages Palestinian women to raise their voices against sexual harassment and abuse. 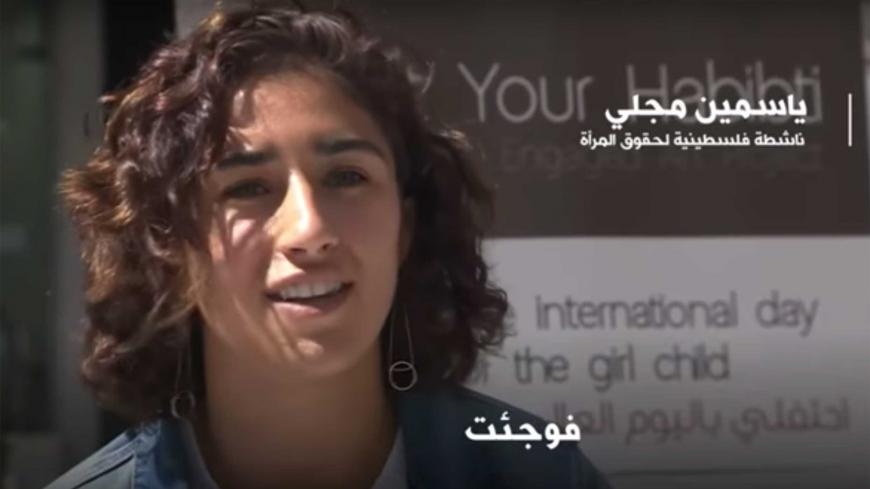 RAMALLAH, West Bank — Palestinian artist Yasmeen Mjalli will talk Nov. 29 with students at Al-Quds University in the West Bank city of Abu Dis about their experiences with sexual harassment, as part of a project called “I am not your sweetheart,” which aims to encourage women to speak out against harassment and abuse.

The meeting is the second phase of Mjalli’s project. Earlier this month, she placed a wooden table on the sidewalk of Yasser Arafat Square in Ramallah and asked women to come forward with their stories of sexual harassment. The stories she collected will be made into a book, published in English and Arabic, which will be launched in conjunction with an art exhibition.

The book and artwork will tell the stories of Palestinian women who have suffered sexual harassment in the streets, the workplace or public places. The book will include 200 stories and will be launched in Ramallah at a date yet to be determined. At the same time, an exhibition in Ramallah will open displaying paintings that portray the issues of harassment and abuse women in Palestine face.

The first phase of the project took place Oct. 16, when Mjalli, equipped with a typewriter, set up a table in front of a banner that read “Do not stay silent on harassment.” Many of the women who passed by offered to share their stories and tell the artist about the sexual harassment they have experienced.

One of the women who talked to Mjalli told Al-Monitor on condition of anonymity. “I took part in this project to narrate the harassment I have been subjected to. Refraining from speaking up about harassment is no longer acceptable, particularly since [such incidents] occur everywhere every day,” she said. “I had thought that what happened to me does not happen often. Yet when I took part in the project, I learnt and heard of many stories.”

She recounted her own experience, saying, “I took a cab in Ramallah city; the driver remained silent and did not utter a word throughout the entire ride. When we arrived at my destination, he started verbally harassing me and using inappropriate terms with a sexual connotation. I rushed out of the cab.”

Through this project Mjalli seeks to give a voice to Palestinian women who face harassment. She noted, “Women are subject to many harassment incidents, which are left unspoken, as these women fear their parents and the community. This is because such incidents are associated with 'honor.' I am convinced that the best way to change the reality is boosting self-confidence among women, speaking up about these incidents and having these women learn that they are not the only ones subjected to sexual harassment.”

She added, “More than 250 women stopped by the table in Ramallah city center to learn about the campaign and its goal. But only 50 dared to talk and document sexual harassment incidents they were subjected to."

The book and exhibition will address the negative impact of sexual harassment on women and engage the audience in a discussion on how to handle harassment and abuse.

Various youth and community campaigns have focused on the same topic in the last few years. One of the most famous campaigns was “Do not stay silent … He does not have the right,” a youth campaign that was launched in October 2016 by the Women’s Health Center in the Gaza Strip. On June 16, 2015, the Palestinian Center for Peace and Democracy organized a campaign, called “Do not stay silent,” against verbal and physical sexual harassment in the Palestinian territories.

Despite these campaigns, the issue of sexual harassment continues to be ignored in the Palestinian territories, due to conservative traditions — and because the connection is made with “the family’s honor.” Because of this mentality, along with the tendency not to report harassment, accurate statistics on harassment and abuse are not available. In addition, there are no penalties in the Palestinian Penal Code to deter the harassers, which also prevents women from reporting such incidents to the police. This is why the youth campaigns are designed to encourage women to raise their voices against sexual harassment.

Louay Arziqat, a spokesman for the Palestinian police, told Al-Monitor, “Cases of sexual harassment are rarely reported to the police. All of the necessary legal procedures are however taken when a complaint is filed.”

He added, “We call on all women to file complaints of sexual harassment, and such cases will be treated with the utmost confidentiality.”

Ilham Sami, the director of the Complaint Unit at the Ministry of Women’s Affairs, told Al-Monitor, “The Penal Code — which dates to 1960 — does not recognize sexual harassment as a crime. Hence, resorting to the judiciary and asking to be granted a protection order will not be worthwhile for a woman, girl or a man who suffered sexual harassment.”

She added that the Penal Code has become obsolete and needs to be changed. “However, decision-makers refuse to do so. The community must pressure decision-makers to amend the law,” she added.

A team of legal and human rights institutions led by the Ministry of Justice prepared a draft Penal Code in 2010 that recognizes sexual harassment as a crime. The draft law was submitted to the Cabinet in 2011, which approved it and referred it to President Mahmoud Abbas for ratification — but Abbas refrained to do so. On May 13, 2014, the government entrusted Minister of Justice Ali Abu Diak to submit to the Cabinet an amended draft Penal Code for approval before referring it to Abbas for ratification. To this day, Abbas has not ratified it.