Activists from the conservative Gaza Strip recently launched the #MeTooGaza hashtag on social media to encourage sexual harassment victims to talk about their experiences and share their stories. 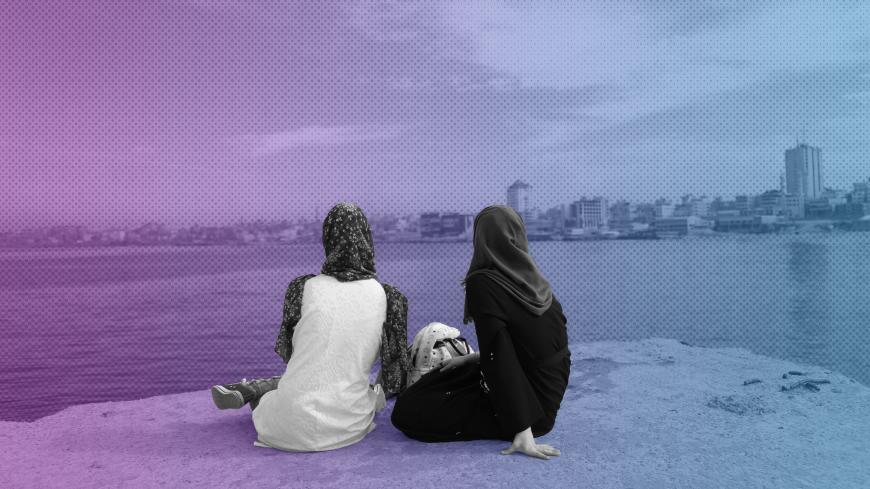 GAZA CITY, Gaza Strip — Sexual harassment is taboo in the conservative Palestinian society, and female victims of harassment stay mum for fear of having their reputation tarnished.

On March 29, activists in the Gaza Strip launched a social media campaign to encourage victims to talk about their sexual harassment experiences. The #MeTooGaza hashtag was launched on Twitter and a page on Sarahah (Arabic for Honesty) was created, which is a social media application that allows its subscribers to anonymously share stories and receive constructive feedback.

The #MeTooGaza campaign follows the global #MeToo movement launched in October 2017. Thousands of women and men around the world shared their stories under this hashtag to shed light on the sexual abuse they had suffered.

“The idea is to encourage girls to reveal the sexual abuse against them, to confront society and to stigmatize the offender, not the victim,” one of the organizers of the campaign told Al-Monitor via Twitter direct messaging. He preferred to remain anonymous for reasons he said were personal.

He said, “The amazing outcome of the global #MeToo movement encouraged us to emulate the experience in Gaza. People are asking us to organize awareness campaigns for children about harassment and others are writing us to provide advice to victims or survivors.”

The United Nations defines sexual harassment as “any unwelcome sexual advance, request for sexual favour, verbal or physical conduct or gesture of a sexual nature, or any other behaviour of a sexual nature that might reasonably be expected or be perceived to cause offence or humiliation to another, when such conduct interferes with work, is made a condition of employment or creates an intimidating, hostile or offensive work environment.”

The campaign organizers affirmed that they are receiving plenty of sexual harassment stories from Gazans. “Harassment is not uncommon in Gaza, but society is afraid to admit it in order to avoid scandals,” the organizer said.

The #MeTooGaza organizers seek to raise awareness about sexual harassment, offer counseling and psychological support for victims, and refer them to women's support centers.

Tammam Abu Salama shared her painful sexual harassment experience in a tweet under the #MeTooGaza hashtag. “The first man ever to sexually harass me was the school’s bus driver. I was in my early teenage years and had no idea what harassment or physical abuse was. … The education and upbringing of children must be changed. Girls should be able to express themselves without fearing consequences,” she wrote.

Abu Salama, a feminist activist from Gaza living in Brussels, told Al-Monitor, “The Gaza Strip is different from all other places around the world. The [living] situation there cannot be compared to that in other places because of the political circumstances and the hardship that women in Gaza experience on a daily basis. This situation is the outcome of the deteriorated economic and social system. Unfortunately women are always the weakest link.”

She added, “Our society needs campaigns such as #MeTooGaza. We have to break the taboos, stop the denial and be more realistic. We must understand that there is no freedom without freedom between the sexes.”

For Abu Salama sharing harassment stories on social media is the safest and easiest way to shed light and raise awareness on this subject. “Not all women can tell their stories and reveal their identities. A girl who is harassed would see her honor questioned. She would face accusations of wrongdoing and debauchery.”

Zainab Ghunaimi, the director of the Center for Women's Legal Research and Consulting (CWLRC), told Al-Monitor, “Sexual harassment is one of the most difficult things to prove to the police or specialized courts. The victim is often coerced to remain silent.”

She said, “We are only contacted by such cases when the situation is bad. The victim remains silent out of fear, which the aggressor often interprets as consent and an excuse to continue the harassment. If the victim files a complaint, it is difficult for her to prove the incident took place. This is why families try to solve the problem amicably. In the worst-case scenario, the issue would turn into a fight between two families.”

Despite the secrecy surrounding harassment cases in the Gaza Strip, Ghunaimi categorized it as a phenomenon, but gave no figures on the number of complaints submitted to CWLRC. “It is not easy to monitor figures about victims of sexual harassment. Some incidents are verbal, using insults and obscene words in the street and in public places. Verbal abuse can sometimes be associated with gestures and looks. In some incidents women are harassed through inappropriate touching. This affects women, girls and children of both sexes. Harassment is often committed by a person in the victim’s social setting, neighborhood or school. Another type is e-harassment, committed through social media or smartphones. Victims of this act would face extortion by the harasser.”

The police and courts continue to refuse providing data on the number of sexual offenses recorded in their archives, arguing that this violates the dignity of society.

The victim often ends up being blamed for the harassment. The organizers of #MeTooGaza, which sparked controversy when launched, say they were harshly criticized and accused of seeking to extort girls.

One of them told Al-Monitor on condition of anonymity, “The victims must not be stigmatized. The aggressor is the one to be blamed and should be the one to be scared. We preserve the confidentiality of all our correspondence. Some send us their stories on our Sarahah page. We do not care to know who the sender is, we only want the victim to talk.”