In light of the rise of domestic abuse cases in the Gaza Strip, women are resorting to social media to share their stories and try to protect their rights. 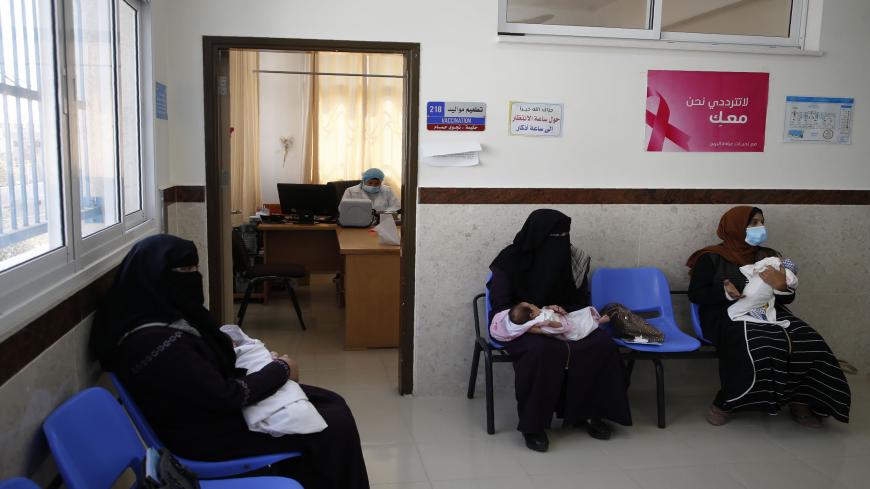 GAZA CITY, Gaza Strip — In the Gaza Strip, an increasing number of women and girls have been resorting to social media to share their experience with domestic abuse. Five campaigns have been launched by activists within two months to fight against domestic abuse. Battered women write their stories on social media, and activists then share them and work to protect the women’s rights and rid them of the violence they are subject to.

This blunt openness about domestic abuse is alien to the Palestinian society, which considers women's issues as sensitive. Such issues, seen as private, are kept away from the media as they could embarrass the concerned woman’s family in a society governed by tribalism.

The rates of violence against women recently escalated in the Gaza Strip, with the death of 11 women since the beginning of this year, according to the 2020 Domestic Violence Survey by the Palestinian Central Bureau of Statistics. The survey found that 29% of women in Palestine face a form of violence during their lifetime. “The Gaza governorate registered the highest rate of violence by husbands against married and divorced women,” registering a rate of 41%, according to the survey.

Ahmed al-Hijazee, a women’s rights activist who is taking part in the current campaigns against domestic violence, told Al-Monitor that the lobbying and support campaigns for battered women are very helpful. “Perpetrators of violence against women could face legal prosecution. This is not to mention the scandal and the harm to their reputation, which they fear more than the legal punishment in a conservative society like Gaza.”

He said that the campaigns are resorting to all legal measures and procedures and having access to the facts of the case away from hasty accusations. “The campaigns are not limited to the appeal posted on social media by the victim. The accused party is contacted, there is coordination with the legal authorities and civil women's institutions, and proof and evidence must be established before posting the story,” he said. “We have to protect ourselves from legal prosecution. We must refrain from publishing any false or misleading information, as this could wrong the accused party.”

Hijazee added that some women have resorted to social media to defame their husbands or families, in light of the great response from the community on women's advocacy campaigns. He noted that these campaigns often end with bad consequences for these women.

In order to be successful, any campaign requires real action on the ground that supports it. “A campaign limited to a social media appeal is not enough to lift injustice,” he added.

Hijazee, who has been working on abused women campaigns since 2017, said, “When the campaign achieves its goals, contact is made with the battered woman to check on her and ensure the continued success of the campaign. This provides the victim with legal protection and helps them obtain their rights.”

Lawyer Youssef Salem said women use social media to share their stories as a last resort, after attempting to solve the issue with their husbands amicably, to no avail. “The use of social media comes after many attempts to end the dispute, either amicably or by resorting to the police,” he told Al-Monitor.

He said, however, that the police do not properly respond to complaints of battered women. “Their cases are referred to the personal status department [of the police]. Sometimes these cases get closed by forcing the battered woman to waive her right for the sake of preserving the family reputation and honor, or for considerations related to religion, customs and traditions.”

Salem noted, “The woman facing abuse would find herself facing a dilemma. She can either choose to keep her silence about what she endured or make her case public on social media.”

He added, “In several cases the interaction these victims got on social media forced their family to fulfill their demands, whether with the intervention of the attorney general or through tribal reconciliation.”

However, Salem noted that the activists' support for women on social media could backfire at these women and destroy their entire family fabric. “This is especially true when activists start using slanderous words and resort to defamation without verifying the veracity of the battered woman’s narrative. Some activists faced threats and prosecution under the cybercrime law. To achieve their objectives, these campaigns should focus on advocacy for rights rather than support for a specific person,” he said.

He explained that Palestinian laws in general provide minimum protection to Palestinian women and must be updated and amended, calling for expediting the promulgation of the Family Protection draft bill, endorsed by the Cabinet in 2018.

Salem said the law is not always implemented and police rarely take action in light of the tribal and patriarchal society, and people prefer to solve their family issues amicably or through tribal mediation. This is why, he added, police workers must be trained on how to deal with women’s complaints, and take into account the interest of women and their choice of either an amicable or judicial solution.

Zainab Ghunaimi, director of the Center for Women's Legal Research and Consulting, told Al-Monitor that the community’s interaction with abused women on social media is divided into three categories. “Some accuse these women of harming their family’s reputation, urging them to opt for amicable solutions, and some support them and try to search for solutions. Others get carried away and interact with these cases in an exaggerated manner without any consideration for the harm that this may cause.”

She explained that when similar cases are submitted for examination by the Public Prosecution it would be better not to discuss them in public. “Victims want their cases examined. They do not seek fame on social media. They want a solution,” she said.

Suheir al-Baba, an attorney at the legal department of the Women's Affairs Center in Gaza, argued that posting stories of female victims of domestic violence on social media is useful and could radically change their lives, especially in light of the coronavirus pandemic and the closure of most institutions.

“Battered women resort to social media with the aim of arousing public opinion and conveying their voice to decision-makers. The Women's Affairs Center follows up with girls and women after they post their stories and provides them with legal protection and psychological support,” she told Al-Monitor.

Baba noted that there is a department at the center that follows up on complaints and cases of domestic violence published on social media. “Domestic violence is on the rise,” she warned, adding, “This is due to the poor economic and social situation in the Gaza Strip and the lack of awareness among men about women and their rights.”