Are men getting away with murder in Gaza?

As more and more women die in Gaza in honor killings or in what are reported to be accidents, some are calling for tougher sanctions against the perpetrators. 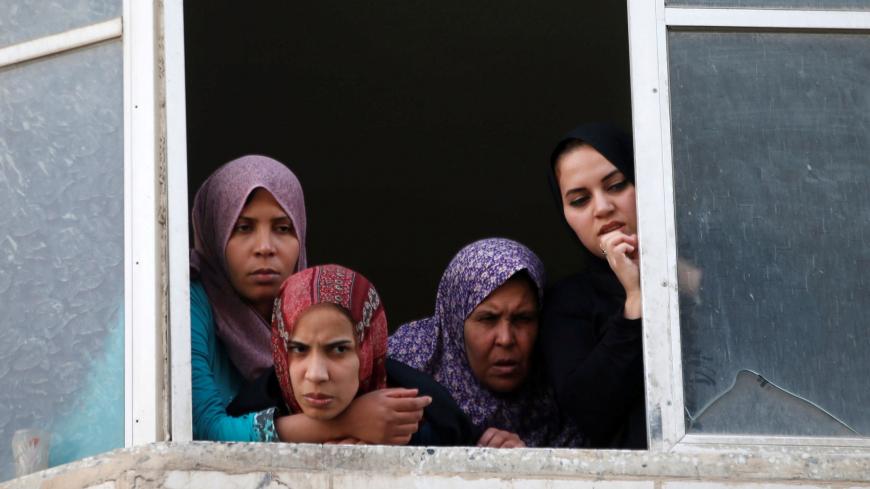 GAZA CITY, Gaza Strip — Fatima Abu Mahdi, 17, who lived in the Nuseirat Camp in central Gaza, was killed Jan. 19 in her house after a bullet hit her in the head. A Hamas-affiliated police spokesman in Gaza, Ayman al-Batniji, told Al-Monitor, “According to preliminary investigations, the family reported that Fatima’s brother killed her by mistake with a bullet that was fired while he was cleaning his gun.” Batniji said the investigation was ongoing.

There have been a number of recent cases where women were killed by a family member in the Gaza Strip, with the listed causes ranging from gun accidents to honor killings.

A 26-year-old woman was killed in the Bureij camp in the Gaza Strip on Jan. 6; her husband was reported to have been cleaning his weapon when a bullet was fired by mistake. Another woman, 42, from Khan Younis in the south of the Gaza Strip, was asphyxiated by her father Sept. 18; he was reported to be defending the family’s honor.

Abu Mahdi’s death sparked a wave of anger on social media and raised questions about why more women are victims of "gun accidents" than men and why men are usually those who have fired the weapon.

Although there are no official statistics on the number of such deaths, Al-Monitor, through research on local media outlets, counted five victims of accidental or intentional violent deaths involving Gaza Strip families in the five-month period between Sept. 18 and Jan. 19. Four of the victims were women killed by a family member at home (two were found hanged and two were killed by the reported accidental discharge of guns); a fifth victim, a man, was a reported to have killed himself in a gun-handling accident.

The man's death was the exception to the rule. Palestinian activist Mohammad Hasna posted on his Facebook page Jan. 20, “In what position is the weapon being cleaned? How come its cleaning always ends in death? What kind of weapon only kills women when being cleaned? Why are weapons being cleaned at home, in the presence of the family, to begin with?”

Abedalla Sharshara, a legal adviser to Transparency Palestine, posted on Facebook on Jan. 20, “Why are women always the victims of weapons handling and killing by mistake in the Gaza Strip? Shouldn’t this occurrence attract the attention of women’s organizations and human rights’ groups in the Gaza Strip? Aren’t 10 cases of killing women by mistake in four years enough?”

Journalist Hajar Mohammad Harb responded to Sharshara, saying, “As long as tribal mentality rules us and as long as there are no just laws for women and laws incriminating the murder of women, and as long as women do not know their rights, nothing will change.”

While several of Abu Mahdi’s family members refused to talk with Al-Monitor, one of her close friends said on condition of anonymity, “Fatima suffered from domestic violence after her parents separated, and she was forced to live with her father and his second wife. Her father also threatened her repeatedly because she refused to wear the niqab.”

Hiba al-Danf is the head of the legal department at the Coalition of Women for Peace, which is affiliated with the Palestinian Liberation Organization and seeks to empower women and sponsor all Palestinian women’s nongovernmental organizations. She told Al-Monitor that the legal and police institutions in Gaza ease off when dealing with violent deaths in which women are the victims. She said that police do not take sufficient measures to find out the real reasons behind the deaths and that people who kill women are not severely punished.

Danf said police investigative units “adopt the policy of covering up in most family killings, under the pretext of protecting the reputation of the family and the civilized face of society, by accepting the explanation that the killing occurred by mistake. This facilitates impunity.”

Samir Zakout, deputy director of Al-Mezan Center for Human Rights in Gaza, called on authorities to treat the killings of women like all other slayings.

He told Al-Monitor that authorities should reject false claims in these crimes, find the true circumstances behind them and take all legal measures against suspected criminals. He also said more stringent measures should be taken to curb the misuse of guns and the spread of weapons in Gaza.

Batniji denied any slackening in police investigations of women’s deaths or an intentional cover-up of the real reasons behind the killings.

He said, “We deal with women’s murders just like any other murders. We take all necessary measures, duly conduct official investigations and hand over the criminals to the judicial authorities.”

He said the possession of guns has spread among citizens as a result of the “constant Israeli occupation. It is normal for citizens to have weapons at home to face Israeli aggression. But we warn against using these weapons in internal incidents.”

On Dec. 13, 2016, the Palestinian Cabinet approved a measure to license guns and ammunition to “curb the spread of illicit weapons, control illegal arms and work against weapons traders and outlaws and those who tamper with the nation’s security and citizens.” The measure is based on the 1998 Law (2) on weapons and ammunition, which prohibits owning and carrying weapons that the Ministry of Interior does not license.

The governmental and legal restrictions fell on deaf ears in the Gaza Strip, as unlicensed weapons are held by citizens and Hamas does not take necessary measures to control them, under the reasoning that the guns are being used to fight armed resistance against Israel.

Zakout said 146 women have been killed since 2004 in violent acts involving families in the Gaza Strip, with at least 51 of them victims of honor crimes.

He added, “In most cases where women were killed in a family setting, the culprit claimed he committed the crime to protect the family’s honor. These explanations are used to evade punishment and seek mitigating circumstances, although in most instances, the circumstances of women’s killings indicate premeditation.”

Article 340 of the Palestinian Penal Code No. 16 of 1960 states, “Any man who took by surprise his wife or any female relative while she was committing adultery with another person and killed, wounded or harmed both of them or either one of them, is entitled to a reduction in penalty. The perpetrator is sentenced to temporary hard labor from five to 20 years instead of a life of hard labor.”

On May 15, 2011, President Mahmoud Abbas made amendments to the Penal Code to exclude women’s honor killings from mitigating circumstances.

The Al-Mezan rights center said in a Sept. 20 statement that the judiciary in the Gaza Strip under Hamas’ rule still allows mitigating circumstances in women’s honor killings. This gives perpetrators the possibility of impunity, and as a result, victims can suffer a double injustice of sorts, as in addition to being killed, their reputation is tarnished.

Danf called for protecting women through a comprehensive social campaign to reject violence in all official, media, religious and educational institutions, and by passing and enforcing laws to protect women from any abuse. But the Palestinian rift that has been ongoing since 2007 and which has impeded the Palestinian Legislative Council’s work is preventing any legal amendments to protect women.