Those who commit so-called honor crimes continue to receive light sentences in the Gaza Strip despite efforts to amend outdated laws in this regard, Asmaa al-Ghoul reports. 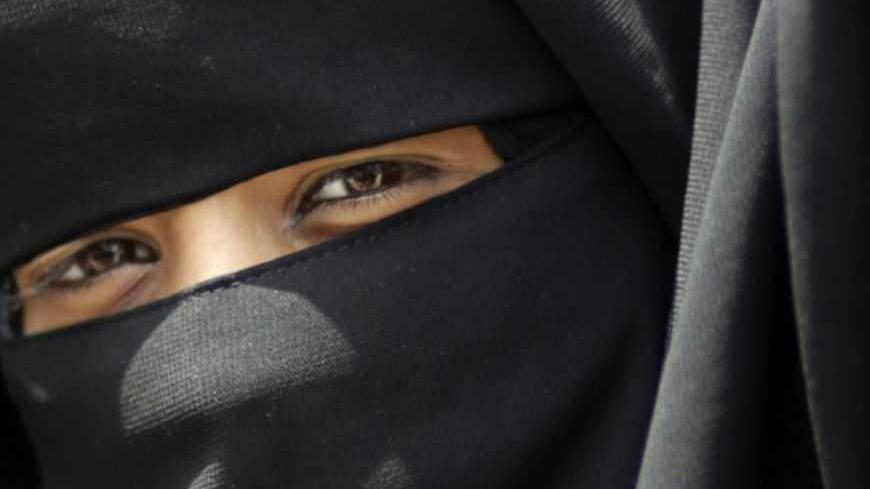 Palestinian women attend a public rally in Gaza City in May 2012. - REUTERS/Mohammed Salem

Hiyam, a 23-year-old Palestinian woman, was killed at the hands of her father and brother at dawn on March 8 under the pretext of a so-called honor killing. Her mother Souad, 44, spoke with Al-Monitor at the family's home in the Nuseirat refugee camp in the heart of the Gaza Strip. Looking gray with fatigue, and so worn out she could not even stand, Souad said, “They wronged my daughter Hiyam. She was my eldest daughter and the sweetest of them all. May god avenge her father and brother.”

The mother told Al-Monitor her daughter's story. “I was visiting my parents, and I slept at their place. Around 3:00 a.m., I received a call from my eldest son, Adham, telling me to rush back home. I felt there was something very bad. When I arrived at home I found my daughter standing there in silence,” Souad said, pointing to a corner in the house. Souad continued, “Adham said that they had found our young neighbor Ahmed inside the house. I asked my daughter, and she said it was a thief jumping out of the window. They did not give her a chance to speak. My daughter was shy by nature. She did not even defend herself.”

With her surviving children sitting around her, Souad's eyes filled with tears, when she added, “I knew they were going to kill her. I screamed and cried, and then I don’t remember anything except that I woke up in a closed room with my young children.”

They wronged my daughter Hiyam. She was my eldest daughter and the sweetest of them all. May god avenge her father and brother.

Mohammed, Souad’s 13-year-old son, related what had happened next. “My mother fell on the floor in the living room. When she fainted, we dragged her to the room and they shut the door. This was the last time we saw my sister Hiyam. There were neighbors and many men in the house,” he said. According to the police and the family, the father and brother strangled Hiyam. The young man, Ahmed, was beaten and thrown from a high structure and presumed dead. Neighbors were asked to witness the act and reported it to the police.

Mohammed added, sadly, “The police came too late. They arrived after one and a half hours. If they had come earlier, they would have saved my sister Hiyam.”

Al-Monitor met with Ayman al-Batniji, the police spokesperson, in his office. Batniji phoned Raed Abu Hoichel, head of investigations in Gaza, to get the details of the crime. After their conversation, Batniji told Al-Monitor, “The police arrived to the crime scene after receiving a call from the neighbors saying that there was a young man on the ground, covered in blood. The police came and arrested him, along with the [female] victim’s father and brother.

After about an hour, the neighbors called again to inform the police that the girl’s body was in the house. The police went to the home and took Hiyam's body to the hospital. It was later revealed that the father and his son had first strangled Hiyam with a rope, and when that failed to kill her, they used a double wire instead. Batniji confirmed that the father and son had been arrested for killing Hiyam, while the young neighbor who was beaten was being held in custody on charges of violation of privacy.

Souad, her son Mohammed and her other daughter, Haya, 12, were holding on to Hiyam’s diary, in which she had written that she wanted to go to a friend’s birthday party and to another friend’s engagement party, but that she could not. The mother explained that her daughter rarely left the house and that there had been nothing suspicious in her behavior. “I remember that the day before she was killed, she asked me to get her a pad, so how can they accuse her of such a crime?” the victim’s mother asked, indicating that her daughter had been menstruating when she was killed.

Batniji said that during interrogations, Hiyam's brother had said that he had found his sister and Ahmed in a “suspicious” situation inside the house. After pressuring them, they confessed that it was not the first such time, which prompted his father and him to take action that morning. Batniji added that the police had arrested the killers on the charge of first-degree murder, but that unjust laws and judicial bodies coordinating with the public prosecutor typically do not apply the maximum punishment for such crimes.

According to the Palestinian Center for Human Rights, in 2012 in Gaza, there were three honor crimes resulting in death, while in 2009 nine women had faced a similar fate. Moreover, according to the Independent Commission for Human Rights (ICHR), a total of 70 such crimes took place between 2005 and 2009 in the West Bank and Gaza.

On March 17, appeals court judge Ziad Thabet spoke with Al-Monitor in the library of the Supreme Judicial Council. Thabet said that during his time in the judiciary, he had noticed that honor killing defendants were usually given light sentences. Three years in prison was the stiffest in these cases. Life sentences or execution were never a consideration.

Thabet deplores this situation but also recognizes that judges are members of the same society in which honor killings take place. He added that there are many cases in which offenders receive reduced sentences for crimes, including some involving acts of family revenge and drugs, punishable by death. In most instances, the perpetrators sentences are lighter due to the young age of the offenders. Honor crimes are another example of mitigating circumstances.

Thabet stressed that the honor killings are a breach of Islamic law. "According to Islam, the crime of adultery is rarely proven, as this requires four witnesses. In the case such a crime has been proven, Islam does not provide for killing the adulterer as a punishment," Thabet said.

Offenders receive reduced sentences pursuant to Article 18 of Penal Code no. 74 of 1936, which is entitled "Necessity." The article provides for "leniency in punishment for crimes that offenders have committed in order to avert  consequences, which could cause irreparable damage to their honor, money, or the honor of those such offenders are obliged to protect."

According to Salah Abdul Ati, a lawyer affiliated with ICHR, the broadness of this article is what allows lenient sentences for killings committed under the pretext of avenging a family's honor. Although acts under this article should be limited to cases of legitimate self-defense, many judges continue to apply it to honor crimes, which reflects the patriarchal nature of Palestinian culture and society. Ati added that most such crimes are committed based on rumors or suspicion while some offenders might be motivated by a girl's inheritance.

Ati also explained that Palestinian Authority President Mahmoud Abbas had issued a presidential decree for amending the article with the addition of the phrase "with the exception of murdering women under the pretext of family honor." The political division between Fatah and Hamas, however, prevented the Legislative Council in Gaza from amending it. The article was struck from the Jordanian Penal Code, which applies in the West Bank.

Hiyam's mother held a picture of her daughter. "She was in middle school in this picture. I wish I could have seen her happy. She had led her life in sadness, taking care of everyone, serving and cleaning for the 12 members of this family. Although I cherish my son Adham, I want him to be punished along with his father for what they did to Hiyam," she said.

Asmaa al-Ghoul, a journalist and writer from the Rafah refugee camp, is based in Gaza.