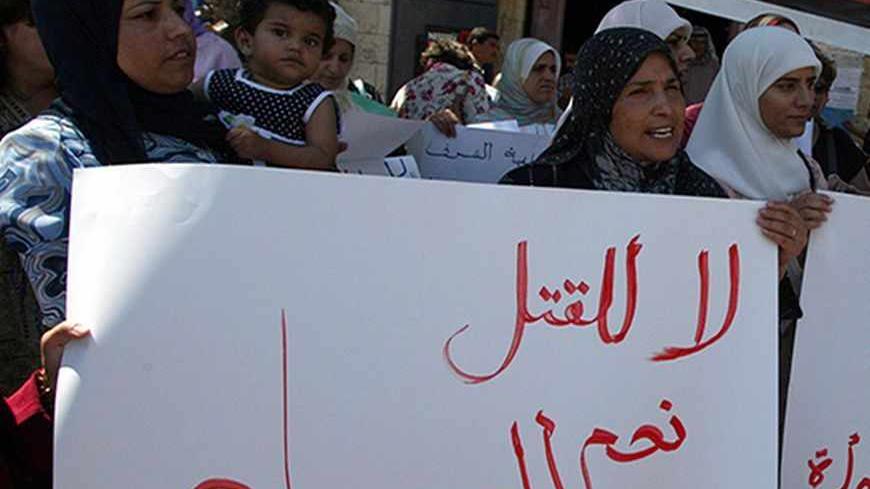 Palestinian women hold up banners reading "No to killing, yes to life" as they demonstrate against "crimes of honor" in Ramallah, Sept. 10, 2005. - AFP/GETTY IMAGES/Abbas Momani

RAMALLAH, West Bank — Chronicle of a Death Foretold, a novel by Gabriel Garcia Marquez, may be an apt description for the most recent honor killing in the West Bank. The entire village of Deir al-Ghusun in the Tulkarem district was aware of the story of the "foretold death" before it actually occurred.

On Friday, Sept. 20, 51 members of the Zeidan family signed a statement condemning the behavior of a female family member, 33-year-old Thamar Zeidan, for "disgraceful and outrageous acts."

The statement from the Zeidan family added that the woman's “repeated behavior … violated God's law, customs and morality," without elaborating on details. "[The father] failed to reform his family and evaluate their behavior,” the statement added. The extended family then disowned him and absolved itself of any tribal or legal obligations regarding him or his actions.

The following day, the woman's father strangled her with a wire while she was taking an afternoon nap.

Two residents of Deir al-Ghusun who met with Al-Monitor attributed the murder to the provocation by the larger Zeidan family of the woman's immediate family.

One villager, who identified himself to Al-Monitor using the pseudonym "Abu Khalid" to avoid any tension with the Zeidan family, said, "Dozens of family members signed this statement, disowning the father since he was not controlling his family's behavior. Is this not incitement to murder?"

Multiple eyewitnesses confirmed to Al-Monitor that the statement disowning the father had been posted on the walls of village houses and the door to the mosque, the largest religious and moral authority in Palestinian society.

"It is known that his girl had been married off early, before the age of 15. Her husband had divorced her approximately four years ago and she has two children — a 15-year-old daughter and a 12-year-old son," noted Abu Khalid.

Regarding the circumstances preceding the woman’s murder, multiple sources from the village told Al-Monitor that villagers had been spreading rumors about the woman after a drunken man from a nearby village broke into her home. The neighbors beat the man and ejected him from the house. This incident was followed by the release of the statement disowning her father, which was signed by the Hamas deputy in the Legislative Council, Abdel Rahman Zeidan.

The Palestinian media highlighted that Abdel Rahman had signed the position, and news reports focused on this more than the murder itself. Given his position as a deputy in the Legislative Council, he should have risen above solving the problems of his family and his village with such a statement. However, it is certain that his position as a deputy for Hamas has made the issue take on wider dimensions, and it is being used in the political and rhetorical war by rivals of the movement.

"We did in fact meet and discuss the issue, and it was agreed upon to publish a statement disowning the father, knowing that the second option was to expel him and his family from the West Bank. In total, 51 people signed the statement," he was quoted as telling Ma'an News Agency.

"Our goal was to protect the honor of the Zeidan family, because we are a conservative family with customs and traditions. I dealt with this issue in my personal capacity as a member of this family, and not in any other capacity," he added.

The MP sought to distance himself from the honor killing, condemning such crimes in a statement published by Ma'an News Agency as "an assault on the sacred human spirit, and are incompatible with the legal provisions that prohibit murder, except when justified."

That a Hamas parliamentarian has been accused in the media of incitement will serve the political infighting between Hamas and Fatah. This is the reason the Deir al-Ghusun crime elicits greater reactions than those elicited by another, equally horrifying crime that occurred on Sept. 14 in the town of Yatta in Hebron, involving the murder of a young girl with special needs.

Haitham Arar, an elected member of the General Secretary of the General Union of Palestinian Women, wrote on her Facebook page that it was the girl's mother who had killed her daughter, after the latter was sexually assaulted.

A statement released by Palestinian police confirmed that the body of a 21-year-old woman with special needs had been brought into the emergency room in a hospital in Hebron, and was transferred to the autopsy department to determine the cause of death.

These two crimes, which occurred in the span of a single week, angered women's rights and human rights groups. The latter rushed to hold workshops and consultative meetings, specifically in Ramallah, where the NGOs are headquartered.

In statements and during these workshops, rights groups demanded that President Mahmoud Abbas urgently ratify the draft Palestinian Penal Code, since the Legislative Council, constitutionally authorized to issue laws, has been suspended since 2006. This draft law would end reduced punishment for perpetrators of honor killings, as is the case with the Jordanian Penal Code of 1967, which is applied in the Palestinian territories.

"This is the 25th crime against women since the beginning of the year, and the third this month. There is a woman still in critical condition in a Jerusalem hospital after she was shot," according to Amal Khreisheh, the director of the Palestinian Working Women Society for Development (PWSSD), speaking to Al-Monitor.

"The attorney general and the head of the Supreme Judicial Council must be held accountable. There are dangerous indications that the murder of women has become widespread, while offenders receive lenient punishment," noted Khreisheh.

The numbers Khreisheh mentioned above are based on figures from the Women's Center for Legal Aid and Counseling. Latifa Sahwil, a legal expert from the group, confirmed to Al-Monitor that although a “total of 25 women had been murdered since the beginning of the year, the center has not completed its legal and on-the-ground research regarding the number of those killed specifically in honor crimes.”

The latest data issued by the center states that 29 women were killed in honor crimes between 2007 and 2010.

“There are some cases of suicide and murder that are difficult to prove are honor crimes,” said Sahwil.

Yet regardless of whether women’s rights centers can prove that these cases were honor crimes, it remains well known in society that there are women murdered under this pretext. These are often stories of “deaths foretold,” since the family or community spreads rumors or issues statements to justify the crime.