Palestinian Authority President Mahmoud Abbas has failed to sign laws criminalizing honor crimes despite pledges to do so. 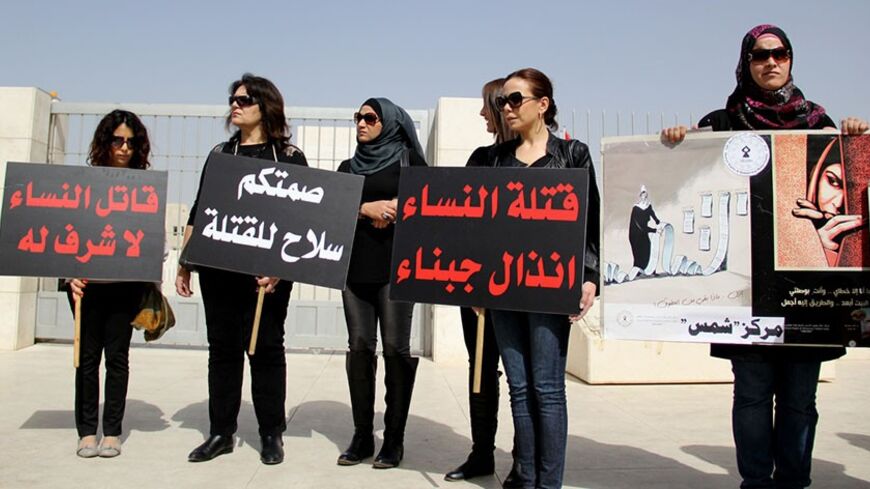 Palestinian women raise banners outside the presidential residence in Ramallah to condemn crimes against women and the official silence regarding the persistence of these crimes, March 6, 2014. - Ahmad Melhem

RAMALLAH, West Bank — When Samah Bader of Hebron got married five months ago, she did not know it would be the beginning of the end. She had no clue that she would become the eighth woman to be killed in the West Bank and Gaza Strip in 2014. On March 4, Bader's husband, a lawyer and university instructor, stabbed her to death in their Ramallah apartment.

As reported by Al-Monitor in early 2013, the Palestinian territories experienced an increase in the number of gender-based crimes in comparison to other years. In 2012, 14 "honor crimes" were committed, while in 2013, that number almost doubled, to 27. The Palestinian Central Bureau of Statistics reported that 15 of the victims had resided in the West Bank, while the other 12 had lived in the Gaza Strip.

Palestinian women marked International Women’s Day with a protest in front of the presidential headquarters in Ramallah. They also presented a memorandum to President Mahmoud Abbas calling for the adoption of a draft penal code and a law on domestic violence.

The Palestinian Legislative Council has been crippled since the 2007 division between the West Bank and Gaza governments, and therefore has not passed any new legislation. Abbas, however, has unilaterally implemented tens of laws through presidential decrees. For instance, on May 15, 2011, he issued a decree stipulating the amendment of Penal Code 16 of 1960 (enforced in the West Bank) and Penal Code 74 of 1936 (enforced in Gaza) and freezing Article 340 of Penal Code 6 of 1960 (from Jordanian law). These articles relate to exonerating and mitigating excuses for commuting the sentences of those who commit honor crimes.

Article 340 stipulated, “He who discovers his wife or female relative committing adultery and kills, wounds or injuries one or both of them is exempted from any penalty, and he who discovers his wife, or one of his female ascendants or descendants or sisters with another in an unlawful bed and he kills, wounds or injures one or both of them, benefits from a reduction of penalty.” Abbas' suspension of this provision, however, meant little as Palestinian courts have rarely considered it, and a perpetrator can still receive reduced sentences based on other statutes.

Prior to amendment, Article 18 of Penal Code 74 held, “Reduced punishment and leniency in punishment may be provided for crimes that offenders have committed to avert consequences that could cause irreparable damage to their honor, money, or the honor of those such offenders are obliged to protect.” To this, Abbas’ amendment added “with the exception of killing women under the pretext of preserving the family's honor." Here again, Abbas' fix was merely cosmetic, leaving open a number of legal loopholes.

Khitam Saafin, president of the Union of Palestinian Women’s Committees, spoke with Al-Monitor during the March 6 protest in Ramallah. She asserted that Abbas’ decision to freeze Article 340, following the death of Ayah Baradiya at the hands of her uncle in 2011, falls short in addressing the problem of violence against women. Saafin asserted, “We are demanding [the immediate issuance] of a law that limits the use of exonerating and mitigating excuses to kill women. There are many murders committed for different reasons. However, the mitigating excuse is used by the killer as a cover for the crime he committed by claiming it was an honor crime. We want a modern penal code that meets the needs of women.”

Saafin attributes the non-issuance of a presidential decree or proper law criminalizing all violence against women to the absence of lobbying on the part of various political parties and institutions. The journalist and feminist activist Amal Jumaa told Al-Monitor, however, that there has been no decree because the political and legal decision makers are not concerned with the issue. 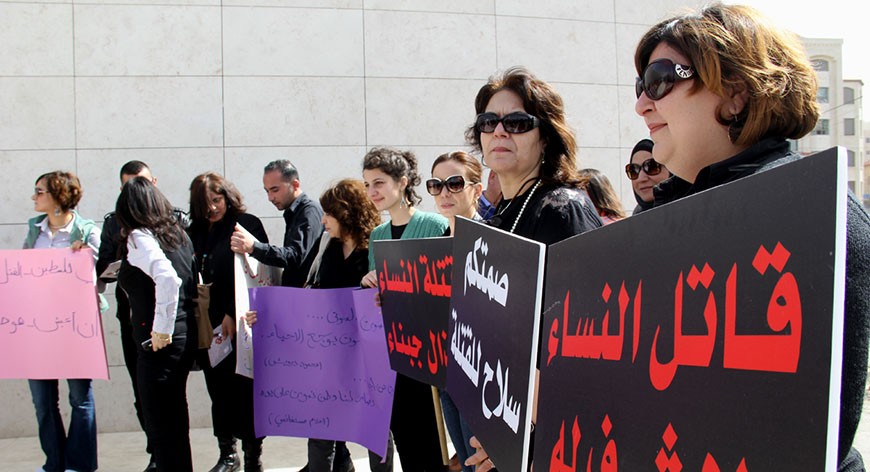 The spike in violent crimes in Palestinian society, reflected by the killing of women and the spread of societal despair, is stark. Speaking to Al-Monitor, Suraida Hussein, head of the Women’s Affairs Technical Committee (WATC), attributed this violence to the continued political and economic deadlock, the preoccupation of the Palestinian Authority with negotiations with Israel and the vacuum left by the legislative council in not passing new laws.

Abbas responded hours after the March 6 protests. He ordered the cabinet to form a legal committee tasked with conducting a comprehensive review of all the articles in legislation related to discrimination against women and to make the necessary legal amendments.

Hassan al-Aouri, legal adviser to the president, was quoted in the Palestinian press as noting that the committee would be formed “in coordination with relevant authorities and civil society institutions.” In a phone interview with Al-Monitor, Minister of Women’s Affairs Rabiha Diab described the committee as being “tasked with the preparation of a new modern penal code.”

The committee consists of jurists, a team of representatives affiliated with the office of the president, the Ministry of Justice and other ministries, as well as members of civil society organizations working on preparing a law to suit all segments of Palestinian society. According to Diab, a great deal has already been accomplished. 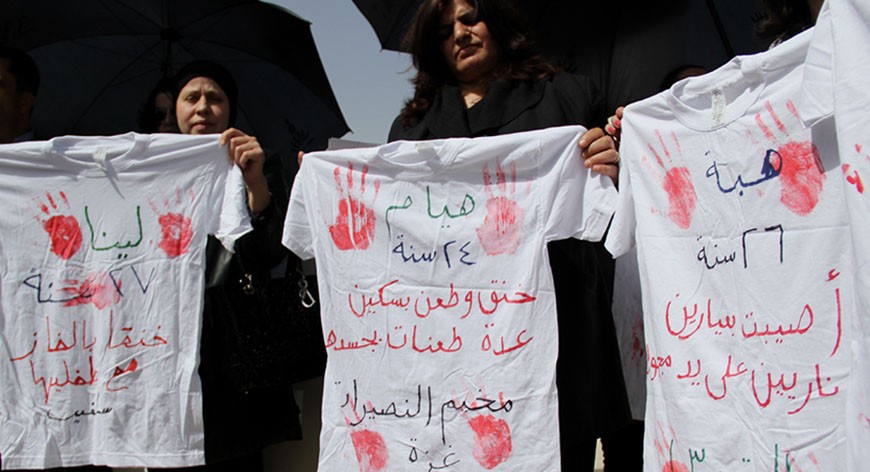 Some doubt that a new Palestinian penal code will be issued as an alternative to the Jordanian code, given the absence of political will among Palestinian leaders. In a phone conversation with Al-Monitor, Shawan Jabarin, general director of Al-Haq, asserted, “I have worked, through my organization and as a representative of civil society institutions, on preparing a new modern draft penal code, along with various institutions, ministries and rights activists. The draft was presented to the Palestinian government. In 2011, the government ratified the law and handed it over to Abbas for approval, after it had gone through all legal levels. However, the president did not sign it and kept it in the drawer.” Jabarin said the Ministry of Justice supervised the discussion about the draft penal law and attributed Abbas' failure to approve it to “the absence of political will.”

Jabarin noted that the draft penal code classifies the murder of women as an "ordinary" murder, thus lacking cause for reduced sentences. “The Palestinian draft penal code was very much appreciated by the UN High Commissioner for Human Rights, Navi Pillay, who asked the president to approve it. However, Abbas said he wanted to consult with Al-Azhar, in Egypt, to discuss some of its clauses,” Jabarin revealed.

Regardless, the issuance of a new penal code might not be enough to tackle violence and murders against women, given the current political situation and division among Palestinians, according to WATC’s Hussein. She noted, “The law might be applied in the West Bank but not in the Gaza Strip.” Nevertheless, Hussein argued, it is necessary to make swift amendments to the law, which have been used by the killers of women to obtain reduced sentences.

Hussein argued, “A decree ought to be issued so that perpetrators receive severe punishment. It is not enough to ratify the law to exert pressure at the civil and popular levels. People must be aware of the seriousness of killing women, which can only be done via deterrent punishment.”

This apparently would not be hard to do. Issam Abdin, a lawyer with Al-Haq, confirmed on Palestinian media, “Amending the penal code to redress the balance for women is not a complicated issue. We need to amend five texts by adding six words.”

All photos by Ahmad Melhem