Increasing Islamization in the Gaza Strip is eroding the rights of women, the latest sign of which is a new regulation at Al Aqsa University requiring all women to dress with “modesty,” writes Asmaa al-Ghoul. 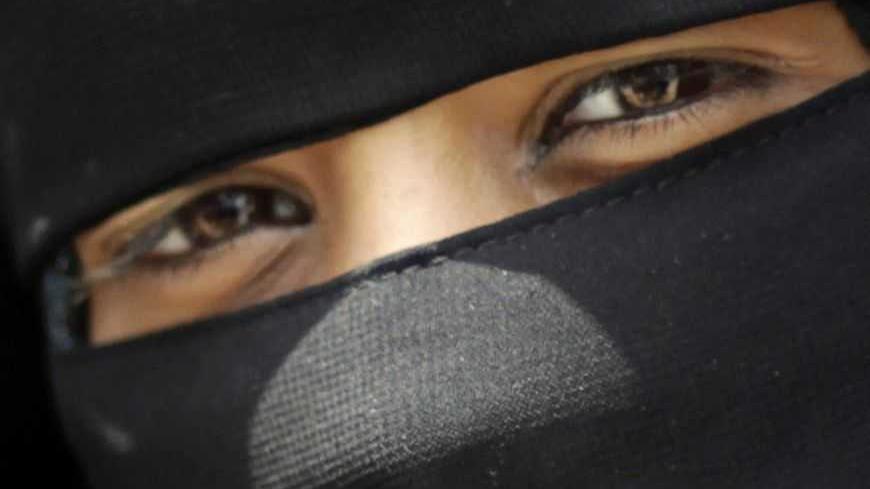 A Palestinian woman attends a rally in Gaza City to show solidarity with prisoners held in Israeli jails, May 3, 2012. - REUTERS/Mohammed Salem

Al Aqsa University, a public university in Gaza, has introduced an Islamic dress code for women. After being characterized for more than 20 years by political and intellectual diversity, female students are now bound to adhere to a strict dress code, including an abaya (cloak) and hijab (veil) while on campus. The decision has caused uproar and sparked heated debates.

Dr. Naaman Ulwan, an independent academic and advisor for cultural affairs at Al Aqsa University, revealed to Al-Monitor that he did not know about the decision ahead of its announcement on Jan. 26, 2013. Ulwan affirmed that even if such decision was approved, it certainly complies with the conservative society of Gaza that does not tolerate attire showing women’s curves.

Dr. Faiq al-Naouk, advisor for managerial affairs in Al Aqsa University and the decision maker, expressly denied the “Taliban” aspect of this decision. He reiterated that it was unanimously approved two months ago and would be implemented at the beginning of the next semester, underlining that he was not a representative of Hamas in the university board.

Naouk elaborated on the implementation process, stressing that it was a matter of “persuasion” not “coercion.” Female employees would stand at the front gate of the university to observe the students; any female with alluring apparel would be reprimanded, once or twice, until she abided by the decision. “If we were intransigent, I would not have received you while you were unveiled, but even though you weren’t veiled, we received you and gave you an interview. We are not extreme, we are moderate,” declared Naouk, addressing Al-Monitor’s reporter.

The Gaza government has taken some decisions that have been seen as sexist, religiously irrelevant, and merely related to personal interpretations. Women have been prohibited from riding bicycles and smoking water-pipes, it is not allowed to display lingerie in storefronts, and females are required to wear hijab in public schools and courts. This is all part of a national campaign to restore virtue implemented under the auspices of the police force.

“Women’s rights in Gaza are regressing. Many decisions are being passed in secret and only become public by chance, such as the decision to destroy curriculum books that are thought to be morally corrupting, in addition to the imposition of the hijab in schools and the prohibition of female participation in folklore dancing. When Hamas officials are asked about these matters, they always end up finding shallow justifications,” said feminist activist Dunia al-Amal Ismail.

Ismail contends that whenever women call for change and an improvement in their social situation, they are asked to put their demands on hold under the pretext that it is not the right time; the people are fighting the Israeli occupation. Ismail, however, notes dangerous changes being made by the government pertaining to the endorsement of the penal code without informing the feminist movement. Causes like gender equality are seen as a western product and feminist movements are thought to contradict Islamic feminism. “Accusations are heaped upon the feminist movement, even though the struggle it led — on the level of amending laws and imposing quotas for women — has ushered in the participation of Hamas’ women in the legislative council,” she added.

Currently, the streets of Gaza are cluttered with advertising signs that read: “An honorable man treats women with honor and integrity, and only a vile and dishonorable man violates and degrades women.” Quoted from the Hadith, these sayings are used to promote the new policies of the government.

Amira Haron, under-secretary for the Ministry of Women’s Affairs, says that the ministry aims to enhance the situation of Palestinian women and reinforce their roles on all levels. The strategic plans are focused on different areas such as laws, economy, studies and raising awareness. Haron says that the ministry is playing a positive role in changing the situation of women in Gaza through many achievements, such as acknowledging the right of widows to have full and permanent custody over their children. She stressed that the ministry does not simply wait for the laws to be amended, rather it exerts pressures on the government to take decisions that do women justice.

Article 18 of the 1936 penal code, applicable in the Gaza Strip and used by judges to mitigate the sentence of a murderer who kills his daughter, wife, mother, sister or relative in the name of “honor” states the following: “Any person who commits a crime to defend himself or another person or their money, honor or pride shall benefit from a reduced sentence.”

Haroun says that the issue with the penal code is not limited to this article alone, but also includes several articles and provisions that should be amended. Several articles have been suspended because their modification requires a lot of effort. They are based on an old and hackneyed law and should be replaced by a unified Palestinian law in the West Bank and the Gaza Strip.

Regarding the opinion of the Ministry of Women’s Affairs on gender, Haroun stated, “We are not fighting gender, but we are addressing women’s issues from an Islamic perspective. We are also investigating women’s real needs in Gaza, and we do not have to put up with anything that does not suit their situation and role. We have our own agenda and we are not infected with a Western phobia. We just take what is convenient for us and leave out what opposes our religion and Sharia.”

Director of the Women’s Affairs Technical Committee, Nadia Abou Nahla, mentioned in a meeting with Al-Monitor, held at the committee’s headquarters that “the statistics of the Palestinian system show a slow but clear increase in the participation of Palestinian women in the overall workforce. The numbers show a rise from a maximum of 12% in 2006 to 16% in 2011, as opposed to over 85% male participation. It is noteworthy that Palestinian society has the highest rates of female graduates and higher education in the Arab world. However, these rates contradict those showing the presence of women in the workforce, which can be attributed to the traditional mindset of Palestinian society regarding women and their role.

Abou Nahla affirmed that the female employment rate in the government of Hamas reached 35% — a relatively high rate considering the fact that it is political employment. The same can be applied to the West Bank, which has taken several decisions and issued laws independently in this regard. Significantly, however, most of the decisions were in line with women’s rights, but only in the context of the annulment of the article that reduces the murderer’s sentence in honor crimes.

Abou Nahla clarified that, obviously, there was a decline in honor crimes in Gaza Strip in 2012. Only three cases were reported, relative to many more in the previous years. She believes that this is due to the police affirming their presence as the sole body entitled to implement the law. Moreover, there is now a safe shelter for women in danger — the “Aman” governmental center. She added, “Even if we disagree with the way this center deals with battered or abused women and with its religious orientation, we cannot deny that it is protecting women from violence and murder.”

Abou Nahla said, “The Hamas government took more than 200 decisions and issued legislative laws that were approved by the members, such as the amendment of the Law of Associations, including women’s associations. Granting permanent child custody for a widow was another amendment that mainly benefits Hamas women. As for the right of custody for divorced women, judges are dealing with it temperamentally. Other decisions include those of the virtue campaign related to wearing the veil and smoking water-pipes — an activity which hasn’t improved the situation of women but has influenced the idea of public liberties negatively.”

She said that the decision taken by the board of Al Aqsa University to impose a dress code was against the law, since it was taken without the knowledge of the university’s board of trustees.

Abou Nahla added, “It is true that unveiled women are a minority in Gazan society, but their rights should be protected in a pluralistic society. Consequently, any decision that violates the articles of the basic Palestinian law will be deemed illegitimate.”

Moreover, she considered that the Islamic women’s discourse stems from the idea of doing good and religious forgiveness; whereas the national pluralistic women’s discourse is issued by feminist movements in the Gaza Strip and is based on partisanship, change of concepts and spreading values of gender equality and justice. The first type trains women to memorize the Quran and the principles of obedience to men, while the second empowers them and teaches them self-defense and gender values.