Can you be an Islamist and a feminist?

Feminists and others in the West intent on "liberating" the women of the Muslim world fail to recognize a brand of Islamist feminism demanding public and private space for women to contribute to society. 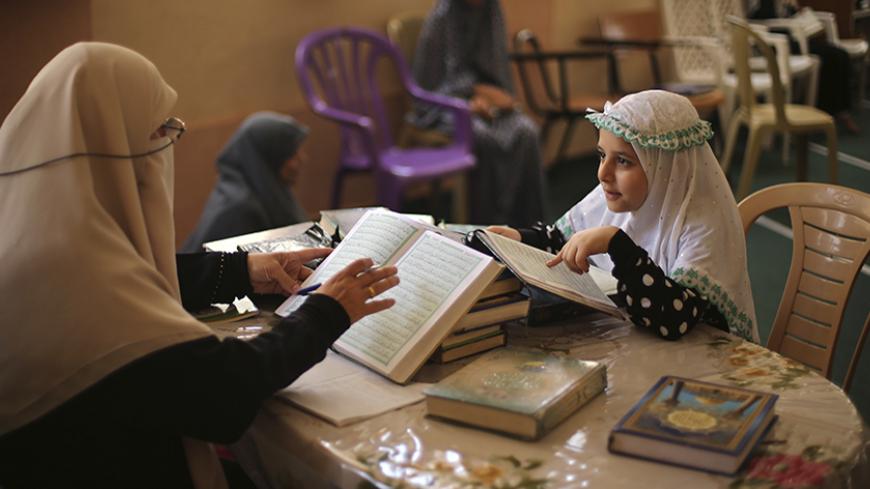 A Palestinian girl recites the Quran to her teacher during a memorization lesson on the first day of Ramadan at a mosque in Gaza City, June 29, 2014 - REUTERS/Mohammed Salem

Islamism and feminism are diametrically opposed worldviews. Arguably, Islamism is accused of sabotaging women’s emancipation, while feminism strives to liberate women from the constraints of patriarchy. Although both have gender at the heart of their activism and projects, being an Islamist and being a feminist are different matters. Many believe a combination of the two is implausible, but it is, however, possible if one is prepared to accept that there are multiple feminisms and Islamisms in the world today.

Feminism, a movement with its origins in the struggle of women in the West for political, economic and social equality, has today fractured into multiple camps. There are, for example, the older feminists with roots in radical feminism who wanted to free women not only from entrenched religious, legal and political constraints, but also from the newer exploitation associated with capitalism, hyper-neoliberalism and the consumer femininity of cosmetic surgery and shopping. This position is now giving way to a kind of liberal feminism in which women are drawn into liberal economic precincts as a show of fulfilling themselves.

When Western feminists looked toward their sisters in other cultures, they were baffled by the persistent exclusion of women, their covered bodies and their inability to challenge masculine domination. They vowed to liberate these women in ways that would put them on similar footing with their counterparts in the West. That project was rather dubious to start with, given its association with older colonial discourses, Orientalist positions and messianic undertones targeting women, especially in the Muslim world.

A few feminists came to the realization that women are not an undifferentiated homogenous mass, but the products of class, race, ethnicity and other hierarchies and affiliations. They acknowledged that a universal globalized feminism associated with international domination and inequality between nations might not solve the problem of exclusion across cultures and deliver the desired equality.

Lila Abu-Lughod, an anthropology professor at Columbia University, argues that women experience structures of domination differently and according to these dividing lines. A black woman in a Lagos shantytown, or a neglected area of a Western capital for that matter, must deal with added constraints from discrimination and marginalization, that middle-class women, white and black, may not experience to the same intensity or degree. Similarly, a Muslim woman in a poor neighborhood of Riyadh experiences gender discrimination in ways different from those of her sister who happens to be a businesswoman.

The appropriation of liberating Muslim women, common in US foreign policy discourse and among global feminists, only complicates matters and creates backlash. Yes, there are general legal constraints and structural barriers under which women around the world live, but their inequality is not comparable. In Saudi Arabia, driving a car might be important to a middle-class working mother, but for a poor woman the question is whether she has personal resources to be able to buy a car rather than whether she wants to be behind the wheel. One feminism for all is an illusion, and if it is imported ready-made from elsewhere, it will prove to be counterproductive.

There is a segment of mainstream Islamism that wants to return to Islam and liberate women in its own way by drawing on new interpretations of Islamic texts. Among proponents of this kind of Islamism, one finds such groups as the Muslim Brotherhood in Egypt, Ennahda in Tunisia, mainstream Saudi Islamism, Hamas in Gaza, Islamists in the West and Jammat-e-Islami in Pakistan among others. These groups offer women a space in their activism.

Thus in Saudi Arabia, some women have found refuge in the Islamist promise to liberate them from exclusion stemming from strict tribal codes, cultural norms and other masculine bigotries. They enlisted as preachers of equality, however, within an Islamic framework, not a global feminist discourse. These women reject the UN-sponsored Convention on the Elimination of All Forms of Discrimination against Women (CEDAW) on the ground that it trivializes the family under the guise of absolute equality between men and women. Instead, Islamist women have called for complementarity, in which gender roles, motherhood, family and traditional women’s positions in society are respected.

These same women criticize religious interpretations that exclude them on the basis of texts interpreted by male scholars internalizing patriarchy. Key to this movement of Islamist feminists is attributing injustices to cultural and tribal codes and absolving Islam of any responsibility for them. They resist mixing gender roles and call for separate but equal spaces of action in which they contribute to society in their own way, the ultimate objective being the preservation of family and community.

Such women see themselves as bearers of authenticity and guardians of tradition. They cite the Quran to prove that God gave them rights and responsibilities, just as it does men, but believe that society has hijacked their autonomy. They want to contribute to society not as atomized free women, but as women in a community building a future for themselves, their children and their nation.

Of course, their country should be pious and respectful of them as women. Some want to drive, but others do not. More important, they want the state and society to honor their inheritance and custody rights as prescribed by Sharia. They want recognition of their contribution and rights under Islamic law, believed to be sabotaged by men, and a space staked out for their engagement in society and nation building. These women also want to continue to receive salaries when they take leave to raise children. Some have demanded this from the state, which has thus far ignored their calls. They also want better educational infrastructures for women and broader job opportunities, including in government and with the religious police.

Is this feminism? It depends on your definition of feminism. The movement is as diverse as Islamism itself. This kind of Islamist feminism is neither anachronistic nor progressive. It is simply an attempt to articulate solutions to a deep and persistent problem, namely, the exclusion and marginalization of Muslim women in countries like, among others, Saudi Arabia.

In some Islamist movements, among them the Saudi Wahhabis and the ideologues of the Islamic State (IS) in Syria and Iraq, the piety of women as the symbol of the nation's authenticity must be upheld. Women must remain in their “natural” position in society, which is as producers of future generations of the pious nation. They also must be segregated in fulfilling the roles suitable to their nature, that is, raising children and educating them in schools.

The women in these societies might call for more jobs that suit their “female nature,” but they will take such positions only if their guardians allow them to do so. In this worldview, women have no legal persona. They must always be guarded by their male relatives. Even their employment and education are the prerogative of these guardians. In Saudi Arabia, the state enforces this injunction and has resisted changes to it, lest the legitimizing clerics of the realm withdraw their support. Pious women can be employed to discipline other women, but under no circumstance should they have authority over men. They can have their own study circles to memorize the Quran, preach good conduct and monitor dissent by other women.

Neither the Wahhabis nor IS has time for feminism, whether Islamist or secular. They deny the existence of a “woman question,” considering it to be a Western conspiracy to corrupt pious Muslim females. They are particularly allergic to mixing gender roles, which they contend have been defined by God, so they chase the “boyat,” the young girls who dress in a masculine fashion, and homosexuals, who are messing with God’s natural law.

At the same time, they do not accept any limitations on marrying four women. In their view, polygamy, which in some instances amounts to nothing more than promiscuity, is legitimatized through the word of God, as the Quran pronounces it permissible. Some Muslim scholars have nonetheless found restricting polygamy an acceptable practice, applying conditions to the ability of men to marry multiple women. The Wahhabis and their counterparts in Raqqa, however, adhere to literal interpretations of the Quran that ignore reason, historical circumstances and religious reasoning (ijtihad).

All the above trends, including the neoliberal feminist movement, are of course obsessed with the female body, the ultimate symbol of nature. They all appropriate this body for their own agenda, seeking to inscribe their ideology on it.

The consumer femininity of late modernity and its obsession with the groomed, perfumed and sometimes androgynous female body coexists with the veiled and concealed Muslim woman’s body. Identity is to be inscribed on the flesh, whether uncovered or concealed. The late feminism of the Femen type wants the flesh uncovered to make a statement. In contrast, Islamist feminists want it totally concealed from the gaze of men, especially those of preying foreigners and their hidden agendas.

No doubt, this is an era of images and sound, and therefore identities are also anchored in visual symbols. The free modern woman must demonstrate her freedom and status with a huge designer handbag, constraining but elegant-looking high heels and a swishy miniskirt. On the other hand, the pious and committed Muslim woman must enter the danger-filled public space fully covered in modest Islamic garb, available from specialty shops selling the latest in Islamic fashion.

Turkey is one of the most developed markets of this Islamist consumerist sector. Colors and styles have both been developed to suit the modern Islamist woman, who is educated, working and elegant. Emine Erdogan, the Turkish president's wife, is but one example.

The extreme Islamist position, common in Saudi Arabia, insists on homogenizing Islamic dress worn in public. So there is only one style — the black abaya (cloak) and the niqab (face covering). In Afghanistan, it is the widely recognizable blue burqa. Both dress codes conceal identity, but at the same time reveal it in a twisted logic. The garb eliminates any sign of a sexual body, hiding curves, contours and even fingers and toes, reducing women to shades of black and blue.

The radical gender agendas of Saudi Arabia, IS and the Taliban are on the fringes of Islamism, although strong and pervasive, especially the Saudi version, which is supported and enforced by the regime. It can never be reconciled with feminism. Meanwhile, mainstream Islamists elsewhere — including in North Africa and Indonesia and other Asian locations — have succeeded in stretching Islamic interpretations to accommodate change.

The women of these Islamisms have been incorporated into the economy, politics, education, media and other sectors of society. Their Islamism speaks to urban, educated and working women, who endorse their programs and fulfill their own individual projects within the spaces provided them. They offer an alternative to the aggressive approach of one feminism fits all. This brand of feminism might be a step toward recognizing Islam’s woman question and offering emancipation that is culturally sensitive to local milieus.

Secular feminists will be horrified by this conclusion, but Islamist feminism should be given a chance to evolve in places that totally reject feminisms tied to the international expansion of Western powers. One must recognize that certain things, among them gender inequality, are too complex to be addressed by one proposed solution or vision, especially those that follow along the same paths of military tanks and fighter jets.