The Saudi Duality on Women 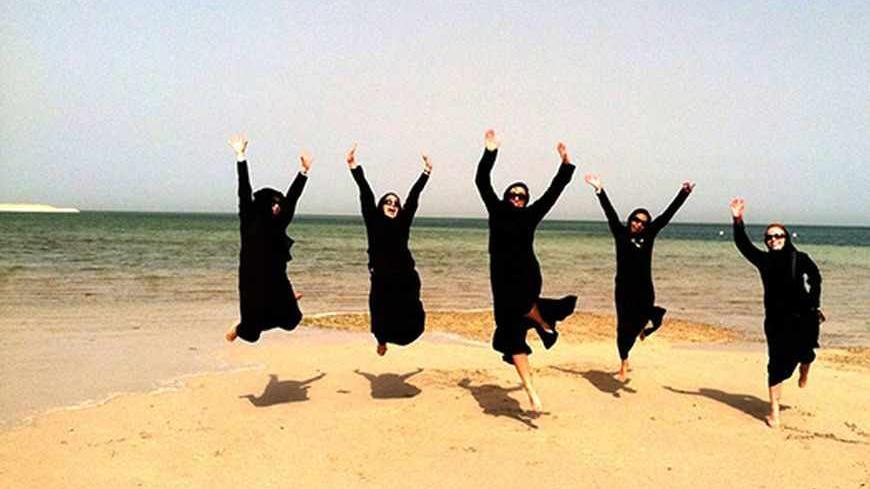 A campaign pushing for the right of Saudi women to drive is being organized with the intent of holding a driving day Oct. 26. The campaign's webpage was immediately censored in Saudi Arabia. - Facebook/Saudi Women to Drive

The Saudi absolute monarchy is increasingly relying on an entrenched duality to assert the myth of its progressive role in the kingdom. The image of the reformist old king has so far rested comfortably with that of the conservative bearded cleric. This duality unfolds best in gender matters and serves to perpetuate the myth about progressive royalty against backward Wahhabi-Salafist clerics.

Yet, this myth may not hold for long despite all efforts to keep it intact. Neither the reformist king nor the conservative cleric is truly concerned with changing the status quo in fundamental ways that empower women as equal citizens. In fact, both work in ways that perpetuate masculine domination. Both the king and the clerics endeavor to free women from private patriarchy within the family only to place them under the public authority of the religious scholars and state institutions.

Both Saudis and the international community are regularly reminded of the king’s commitment to women’s empowerment against the wishes of a conservative patriarchal constituency that prefers women to remain in their traditional roles. Like previous Saudi kings, Abdullah capitalized on the gender gap whereby Saudi women lag behind in employment, political participation and legal status. He made promises to increase their employment and appointed hand-picked women to the consultative council — small steps that were magnified in the press to demonstrate his progressive rule. He reinstated the scholarship program and allowed women to seek education abroad, provided they are accompanied by a male guardian. He also forced shops selling women’s lingerie to employ saleswomen to protect customers from the hazards of discussing the size of their bra with foreign male vendors. He also created new all-women universities to teach scientific subjects and home economics. On the subject of lifting the ban on women driving, the king has not dared to alter the situation. The ban remains hotly debated in a divided society.

So far, two failed attempts to break the ban have taken place without success. In 1990, a group of professional women drove their cars in Riyadh and incurred the wrath of the government-backed Committee for the Prevention of Vice and Promotion of Virtue, better known as a vigilante religious police. The event momentarily distracted Saudi society from a hotter debate concerning the invitation of foreign troops to defend the country against an imminent Iraqi invasion. The women were arrested, then released from prison. The ban on driving was not lifted.

A second attempt took place on June 17, 2011, immediately after the Arab Spring erupted in Tunisia and Egypt. This time, online mobilization on Facebook and Twitter led to a campaign to organize a driving day across the kingdom. The campaign also failed amid calls to punish women drivers and even beat them up if they dared to defy the country’s tradition.

A similar campaign is currently being organized with a view to hold a driving day on Oct. 26. The website of the campaign was immediately censored in Saudi Arabia. It remains to be seen whether this third attempt will have success. While the so-called reformist king hesitates to take sides, a conservative cleric seems to be in a hurry to hijack the coming driving day before its campaign gathers momentum.

Sheikh Saleh al-Lohaidan reasserted his objections to the current campaign, but this time in an animated way as he supported his opinion by “scientific” rather than religious evidence. Lohaidan claimed that driving impairs the pelvis and the ovaries. "If a woman drives a car, not out of pure necessity, that could have negative physiological impacts as functional and physiological medical studies show that it automatically affects the ovaries and pushes the pelvis upward," Lohaidan told the news website Sabq.

Needless to say, this cleric is neither influential nor prominent. He does not serve on the Senior Council of Religious Scholars, the official Saudi group of appointed clerics who are occasionally consulted by the king on social issues. He is simply one religious scholar among thousands who graduate annually from Saudi religious universities and find employment in minor educational and religious consultancy institutions.

His rather amusing statement traveled fast in the virtual world, accompanied by jokes and mockery. The king, too, must be amused, as such ridiculous opinions reaffirm the old myth of the ignorant and conservative cleric while at the same time demonstrating beyond a doubt the progressive credentials of the Saudi leadership.

The media hype about Lohaidan’s recent opinion on the link between driving and women’s fertility is rather sensational and at best misguided. He is simply struggling to establish his relevance in a long debate that neither he nor society has the power to end. Only the Saudi leadership has the power to resolve the debate. But it has no inclination to do so. So far the leadership has remained silent, thus contributing to speculation and further polarization in society.

The ban on women’s driving keeps Saudis busy and fragmented. It distracts Saudis from more urgent questions such as political representation, civil and human rights and unemployment among both men and women. Above all the ban keeps the gender war hot as it sets women against men in an endless battle, thus preventing any alliances across the gender divide.

The Saudi leadership has much to gain from ridiculous opinions that expose the misogyny and ignorance of such clerics — it can convince the international community that it is an enlightened leadership struggling to bring a conservative society into the 21st century. As such, it should not be pressured to implement measures that threaten social harmony and peace. So, those global feminists and their Saudi counterparts who want to save Saudi Muslim women from the bigotry of their menfolk should realize that the likes of Lohaidan are out there to sabotage any new empowering policies.

Lohaidan and his ilk serve an important function. They are a living testimony to the alleged backwardness of certain sections of Saudi society and its radical and conservative position on gender issues. They affirm the cherished duality of the reformist king versus the conservative cleric.

Yet it is important to note that Saudis are not unique in their conservatism among Arabs. Saudi society is not more conservative than for example, Kuwaiti or Qatari societies, where driving is not an issue. The only difference is that in Saudi Arabia the leadership builds its legitimacy on the claim that it guards the honor and piety of society.

The Arab region is one of the last surviving "patriarchal belts" in a world that stretches from North Africa to Asia. As such, women in this region are still struggling to achieve gender equality in a context dominated by authoritarian and repressive regimes. Neither Islam nor tribalism can be singled out as the only causes responsible for gender discrimination. Undemocratic regimes and forces on the ground manipulate both factors to the detriment of women’s emancipation. The Saudi regime and its clerics have played the manipulation game well. The regime builds its reputation as a reformist monarchy by appropriating women’s causes and hijacking their activism, while the clerics assert their role as guardians of the nation’s piety. Both delay women’s full emancipation. Unless Saudi women organize themselves in a real autonomous civil society and enjoy greater economic roles, they cannot influence debates about their own future. Only when they are an indispensable labor force will they be capable of developing an agenda difficult to hijack by men.

So far, the likes of Lohaidan can rest assured that Saudi women’s ovaries will remain intact to produce a future generation of pious and obedient citizens as the leadership hesitates to take sides in a debate that it wishes to remain hot for the foreseeable future.