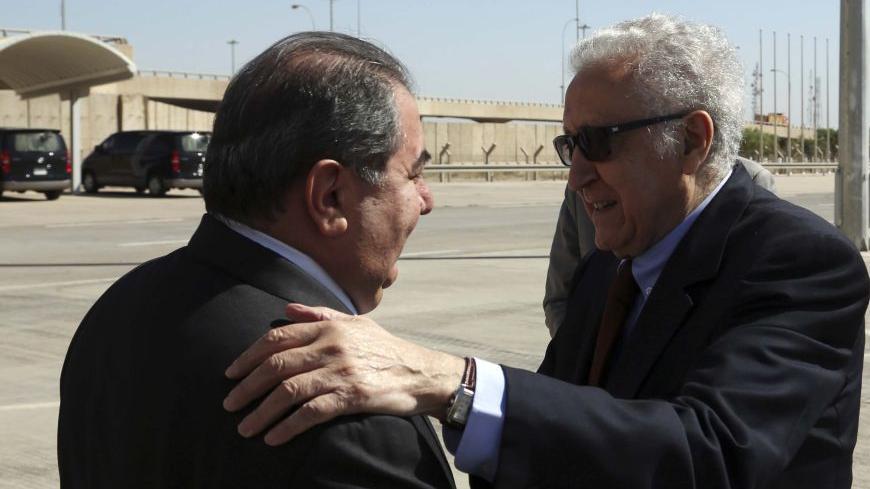 In a grim report to the UN Security Council on Oct. 25, Valerie Amos, United Nations undersecretary-general for humanitarian affairs and emergency relief coordinator, described conditions in Syria as a “race against time,” providing another tragic litany of the toll of the war on Syria, including the potential for the first polio outbreak there in 14 years.

Amos’ testimony comes as Lakhdar Brahimi, the UN-Arab League joint representative for Syria, is on a regional diplomatic tour including, so far, stops in Turkey, Jordan, Iraq, Egypt, Kuwait, Oman, Qatar and Iran, and en route to Syria, in preparation for the Geneva II conference.

Although Brahimi has not confirmed a date for the conference, and invitations have not been sent, the objective is to hold the meeting Nov. 23-24.

In a news conference with Iranian Foreign Minister Javad Zarif on Oct. 26, Brahimi said, “The participation of Iran at Geneva II is natural and necessary.” Zarif added, "If Iran is invited to take part in Geneva II, we will be there to help find a diplomatic solution."

This column first called for Iran’s participation in Geneva II on May 19. On May 24, Al-Monitor reported that Iran had welcomed the Geneva II initiative in an exclusive email interview with Mohammad Khazaee, Iran’s permanent representative to the United Nations.  In an interview with Al-Monitor in September, Zarif said, “We are not begging to be invited” to Geneva II, but “if they ask us to go, we will go, without any conditions, and we do not accept any conditions.”

In other words, Iran has said, time and again, it is ready to play a role in a political solution in Syria, and at Geneva II, if invited, but will accept no conditions on its participation. Tehran is not inclined to endorse the 2012 Geneva communique, which US Secretary of State John Kerry said on Oct. 21 would signal Iran’s good intentions, and rejects the condition that Syrian President Bashar Al-Assad cannot be part of a transitional government, which was listed as one of the points in the London 11 communique  following the meeting of  the Friends of Syria Core Group on Oct. 22.

Kerry himself seemed to offer some distance to the London 11 communique’s conditionality on the role of Assad at the conclusion of the Friends of Syria meeting.  In response to a question in London from Mina Al-Oraibi of Al-Sharq al-Awsat about whether it would “be possible for President Assad to remain as president, hand over some powers, and then run for the elections as he spoke about yesterday and he’s spoken repeatedly,” Kerry answered:

“With respect to Assad himself and his continuance, the question you asked, that’s for the parties to negotiate. That’s not for us to predetermine. The key is that you have full executive authority that is transferred. That means you’re not playing games and someone isn’t pulling the strings from behind the scenes and the people who are there are legitimately moving for all Syrians to protect all Syrians and send a message about a fair, free, transparent, accountable, accessible election for everybody to be able to choose the future of Syria. That’s the standard. And within that standard, the parties will have to decide. We’re — it’s not our decision to make. You have two sides negotiating. Others will be there, but this will be negotiated by the opposition represented by one delegation, by the Syrian opposition, who will bring others in with them, but one delegation on each side, and they will make that decision.”

Kerry’s remark that the composition and nature of the transitional government is a topic for negotiations between the Syrian government and the opposition, not a precondition for Geneva II, stands at odds with the Saudi position on Syria. In an exclusive interview with Al-Monitor on Oct. 22, Prince Turki Al Faisal Al Saud, chairman of the King Faisal Center for Research and Islamic Studies and former director-general of the Kingdom’s General Intelligence Directorate, said that more military support for the moderate Syrian opposition forces is needed to “level the playing field” before “meaningful negotiations” can begin.

The catch, of course, is that the trend in Syria is not toward a level playing field. Instead, the playing field, and the country, is being leveled by the war.

The real-life consequences of the Saudi position are that the war goes on. The Free Syrian Army is being hammered by the Syrian military on one side and by al-Qaeda and the Islamic State in Iraq and Syria (ISIS)-affiliated groups on the other.

The opposition has been funded and backed from the start by Saudi Arabia, Turkey, Qatar and others, including the United States. The moderate opposition is beset by disunity, the differing agendas of its patrons and a lack of military effectiveness and coordination, all of which is unlikely to change. This is not to be critical of those who are fighting for a democratic Syria; it is simply a reminder of the reality on the ground, that there is no military solution in the offing and that a political approach is more urgent than ever.

More delay for Geneva II is a calamity for Syria. The role of the moderate opposition is being diminished, not strengthened, by holding out on the conference. Iran, for example, deals with its own opposition elements in Syria. Turkey is under pressure, domestically and internationally, to crack down on the arms trade and traffic in fighters along the Turkey-Syria border. Qatar, under Emir Tamim Bin Hamad Al-Thani, is more receptive to a diplomatic solution and engagement with Iran than his father.

There is no US or NATO posse on the horizon at this time, and there should be no false hope of such an option while it does not exist. A CBS/New York Times poll last month revealed that 68% of Americans do not believe the US has a responsibility to “do something” about the fighting in Syria.

The Syrian National Council will meet in Istanbul on Nov. 9 to decide on its participation in Geneva II, and whether its interests are best served by more war or by negotiations that might help bring an end to the conflict.

Saudi Women On the Road Again

International news outlets, including The New York Times, reported this weekend on the protest on Oct. 26 by a few dozen Saudi women to take the wheel and defy the Saudi ban on women driving.

Joshua Yaphe wrote for Al-Monitor on Oct. 18 that the push for gender equality “is not a revolution of civil rights in Saudi Arabia; it's a slow and quiet process of change sustained by a broad interaction of societal forces, encouraged by the free exchange of ideas on the Internet, and supported by a wide range of activities and institutions receiving backing from prominent members of society. The highly charged issue of drivers' licenses could turn out to be the last privilege that women receive, long after they have gained basic employment and family rights. Surprisingly, among all of King Abdullah’s attempts to establish a legacy, the advancement of women’s rights may turn out to be the most successful initiative well into the future.”

Caryle Murphy provided the background and context for the driving protest, writing for Al-Monitor on Oct. 21 that “the latest driving campaign comes at a time when the government is taking a harder line against dissent. The Arab Awakening has not brought the same tumult and revolt to Saudi streets as it has to other countries. But it has raised Saudis’ expectations for greater freedoms and political reforms, which are most clearly expressed in social media, especially Twitter.”

Madawi Al-Rasheed wrote:  “The ban on women’s driving keeps Saudis busy and fragmented. It distracts Saudis from more urgent questions such as political representation, civil and human rights and unemployment among both men and women. Above all the ban keeps the gender war hot as it sets women against men in an endless battle, thus preventing any alliances across the gender divide.

Week in Review is a weekly feature of Al-Monitor.