Is Saudi Arabia Holding Up The Geneva II Conference on Syria?

While Turkey may be shifting its Syria policy in response to domestic and international pressure, Saudi Arabia appears to be digging in to oppose the trend toward a diplomatic solution. 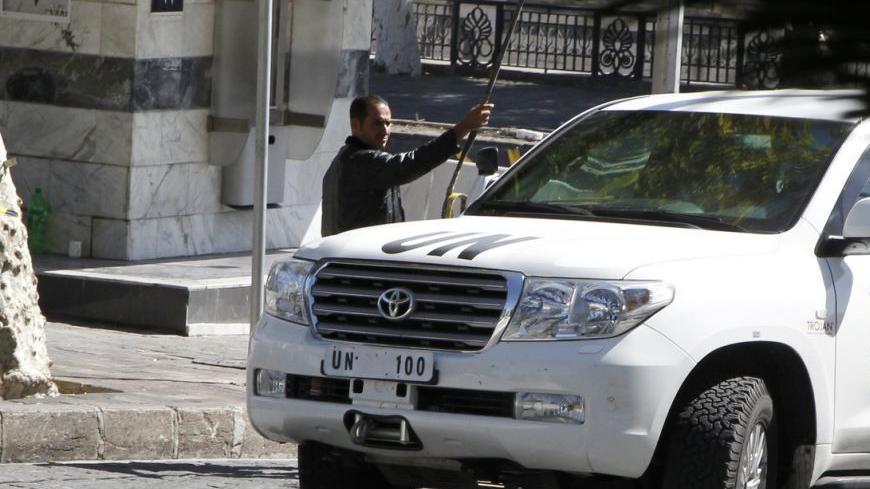 A UN vehicle returns to a hotel where experts from the Organization for the Prohibition of Chemical Weapons (OPCW) are staying, in Damascus, Oct. 11, 2013. - REUTERS/Khaled al-Hariri

UN Security Council Resolution 2118, passed unanimously on Sept. 27 dealing with the destruction of Syria’s chemical weapons, also calls “for the convening, as soon as possible, of an international conference on Syria to implement the Geneva Communique,” which would lead to “the establishment of a transitional governing body exercising full executive powers, which could include members of the present Government and the opposition and other groups and shall be formed on the basis of mutual consent.”

On Oct. 16, UN Secretary-General Ban Ki-moon said that he is intensifying efforts to convene the conference in mid-November. The next day, Syrian Deputy Prime Minister Qadri Jamil told Reuters that the conference would take place Nov. 23-24, adding that Geneva II is "a way out for everyone.”

Following a meeting with UN envoy Lakhdar Brahimi in Cairo on Oct. 20, Arab League Chief Nabil Elaraby also said the conference would take place on Nov. 23-24, although Brahimi, who is scheduled to travel to Qatar, Turkey, Syria, and Iran, said at the same news conference that the date has not been set.

Brahimi added that the opposition is facing “many problems” and that "A conference will not be convened without a convincing opposition that represents an important part of Syria's opposition population.”

The National Coalition of Syrian Revolutionary and Opposition Forces, widely considered as the umbrella organization for the opposition, has said it “will participate in the proposed Geneva II conference when the military balance has changed and the regime has demonstrated a willingness to transfer power to a transitional government with full executive powers.”

The coalition will meet on Nov. 1 to discuss its participation in Geneva II. The Syrian National Council, a prominent member of the Coalition and backed by Saudi Arabia, has opposed taking part in peace talks with the government of Syrian President Bashar al-Assad.

On Tuesday, US Secretary of State John Kerry will meet with the support group for the Syrian opposition in London to encourage the opposition to participate in Geneva II.

While there might be some expected gamesmanship by Damascus about participating in Geneva II, as when Syrian Foreign Minister Walid Moallem told Al-Monitor last month that he did not accept the coalition as the representative of the opposition to the conference, the bet here is that Damascus, in coordination with Moscow, and in the context of its cooperative approach to date in dealing with Resolution 2118, would likely be on board.

Meanwhile, on Oct. 14, Syria became a party to the Chemical Weapons Convention. Inspectors from the Organization for the Prohibition of Chemical Weapons, recipient of the 2013 Nobel Peace Prize, have been working in Syria since Oct. 1 to implement the UN resolution to eliminate Syria’s chemical weapons.

Saudi Arabia has not welcomed the progress on the diplomatic and disarmament tracks. Riyadh would have preferred a US military attack on Syria and a proactive regime change policy toward Syrian President Bashar al-Assad.

The kingdom’s frustration spilled out last week when it refused a long-sought seat on the UN Security Council, in part because of “the Security Council’s inability to carry out its duties and responsibility” in Syria. The kingdom may now be working with its opposition allies and others for a more explicit statement that Assad would not stand for reelection in Syria’s 2014 elections as a condition of participation in the conference.

Nawaf Obaid wrote for Al-Monitor on the context for what he calls a more activist Saudi regional policy, building on what he describes as successes in Bahrain and Yemen, and including a “significantly expanded action by the Saudis in Syria.”

Madawi Al-Rasheed presented an alternative view, that Saudi Arabia’s digging in on Syria and rejecting a seat on the UN Security Council are signs of its isolation, not its leadership, as Obaid argues.  She wrote: “Being a constructive member of the regional and international community is by far much better than leading a club of conservative monarchs struggling to stop the tide of change in their own societies.”

The secretary-general’s goal to convene Geneva II in November is not the only deadline of urgency in Syria. There are also the Syrian presidential elections in 2014.

If Geneva II is delayed, or inconclusive, and fighting continues in Syria into next year, there is a chance Assad could extend his term beyond the 2014 elections, perhaps through constitutional amendment, if necessary, unless the current constitution allows an extension under exceptional circumstances.  Elections, even with international observers, which Syria might otherwise accept, could not be held in a war zone.

In other words, seeking to condition Geneva II on Assad’s not running in the 2014 elections, a likely deal killer for Damascus and Moscow, could have the consequence of assuring Assad stays longer, if elections are postponed.

The Saudi position stands in contrast to rumblings of change in Ankara’s Syria policy. On Oct. 15, Turkish forces responded with artillery fire to mortar shelling from Islamic State of Iraq and Sham (ISIS), as reported by Milliyet and translated by Al-Monitor, a sign that the government of Turkish Prime Minister Recep Tayyip Erdogan may, finally, be responding to the crisis of the prospect of Islamic terrorists taking up camp along his border.

Al-Monitor’s Turkey Pulse columnists, and this column,  have written repeatedly of the urgency of Turkey’s border crisis, the domestic consequences of Erdogan’s unpopular Syria policy (72% of Turks polled oppose military intervention in Syria), and the international pressure on Ankara to reverse its own increasing isolation on Syria.

Semih Idiz wrote that while Turkey has frozen assets of groups and individuals linked to al-Qaeda and the Taliban, the AKP government is still struggling with the transition, seeking to blame Iran for some of its troubles. Idiz connected the recent media pressure on Turkish Intelligence chief Hakan Fidan to the turbulence over Syria policy. Fehim Tastekin reported for Al-Monitor on details of the cross border traffic in weapons and support for jihadists operating in Syria. Rasim Ozan Kutahyali observed that the agitation over Syria policy has led Assad to become a kind of hero among Turkish neo-nationalists.

Finally, this column acknowledges Jean Aziz for breaking the story of the release of nine Lebanese Shiite pilgrims who had been kidnapped in Azaz and two Turkish pilots abducted in Beirut, as part of a deal for the release of dozens of women prisoners held in Syrian jails. The deal was negotiated by Maj. Gen. Abbas Ibrahim, head of Lebanon’s General Security Directorate, who conducted months of intensive shuttle diplomacy among Doha, Ankara, Damascus and other capitals. The deal did not include the release of the two Syrian bishops. The role of Qatar in the negotiations is significant, as it may also signal a trend toward a shift in its policies toward Syria, as Aziz noted.