Walid Moallem, Syria’s minister of foreign affairs and expatriates, says he will not deal with the National Coalition of Syrian Opposition and Revolutionary Forces, possibly complicating plans for Geneva II in November. 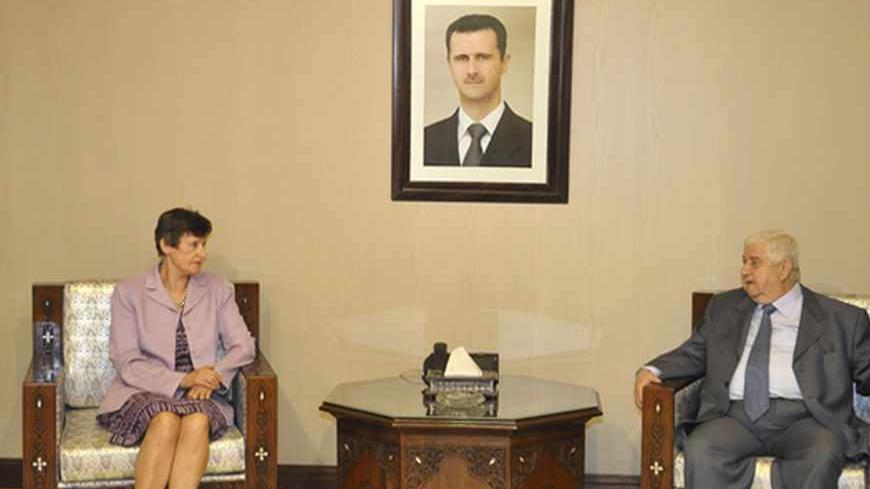 NEW YORK  — Syrian Minister of Foreign Affairs and Expatriates Walid Moallem told Al-Monitor that his government will not deal with the Syrian National Coalition (SNC) headed by Ahmad al-Jarba as the sole representative of Syrian oppositions forces, because the SNC has “no representation within Syria,” and it squandered its credibility by supporting a US military strike on Syria.

UN Security Council Resolution 2118, passed unanimously on Sept. 27, implements a program for the elimination of Syria’s chemical weapons and endorses the Geneva process for a political solution in Syria’s civil war.

Moallem, who also serves as deputy prime minister, said Syria is prepared to engage “unconditionally” in Geneva II and negotiate with an opposition delegation more representative of internal Syrian opposition forces, but not one led by the SNC.

He observed that Resolution 2118 calls for the opposition to be “fully representative of the Syrian people” and that UN Secretary-General Ban Ki-moon said, “The opposition should be represented in a single delegation. They should present their coherent and united voices of the Syrians inside and outside.”

Syria’s position on the SNC may complicate planning for Geneva II, which Ban hopes to convene by mid-November, as the SNC is the umbrella “moderate” opposition group backed by the United States and its allies in the region.

On Sept. 24, 11 opposition groups in Syria broke from the SNC.

Moallem rejected any suggestion that Syrian President Bashar al-Assad should be excluded from a role in a transitional government as a precondition of the conference.

“President Assad is the legal representative of Syria until elections in 2014,” Moallem said. “After that, the Syrian people will decide who will lead.”

Moallem said the resolution’s program for elimination of Syria’s chemical weapons is “fair.” He noted that the reference to Chapter 7 reads that “anyone” can be punished for noncompliance. Syria and Russia maintain that rebel forces have used chemical weapons in the conflict.

Moallem told Al-Monitor that Syria’s filing to the Organisation for the Prohibition of Chemical Weapons (OPCW) of its chemical weapons facilities included seven sites in areas where armed groups are operating.

Moallem said that while those armed groups may not know where the weapons are, the UN and OPCW now do, and opposition forces are obligated under Resolution 2118 to provide security for inspectors and teams.

Asked if he was concerned that a possible thaw in US-Iran relations might jeopardize Iran’s support for his government, Moallem replied, “We trust Iran and are happy that the United States and Iran are talking about Syria.”

He said that while there are no Iranian military forces in Syria, there are military advisers. Moallem added that Hezbollah continues to operate in a “very limited” manner along Syria’s border, near Qusair, as a form of “self-defense.”

The Gulf Cooperation Council (GCC) countries, according to Moallem, play a “very destructive role” in Syria. He predicted that those countries which support al-Qaeda will eventually pay a price at home, as the terrorist groups do not respect borders and have as one of their aims to control the Arabian Peninsula.

Moallem called on Turkey to close its border to terrorists and armed groups. He described to Al-Monitor how terrorists arriving at the airport in Istanbul are provided support and facilitation en route to fight in Syria.

Moallem compared Turkey to Pakistan, which was a base for extremist groups operating in Afghanistan. The foreign minister said that Turkey’s policies have yet to change, despite its “internal problems” and Syria’s close “brotherly ties” with the Turkish people.

Moallem said, “We and Iraq are facing the same terrorist group,” which wants to build an Islamic state and is backed by Turkey.