A UN Security Council resolution has recast the Syria conflict as a matter for international diplomacy, not US unilateral action. 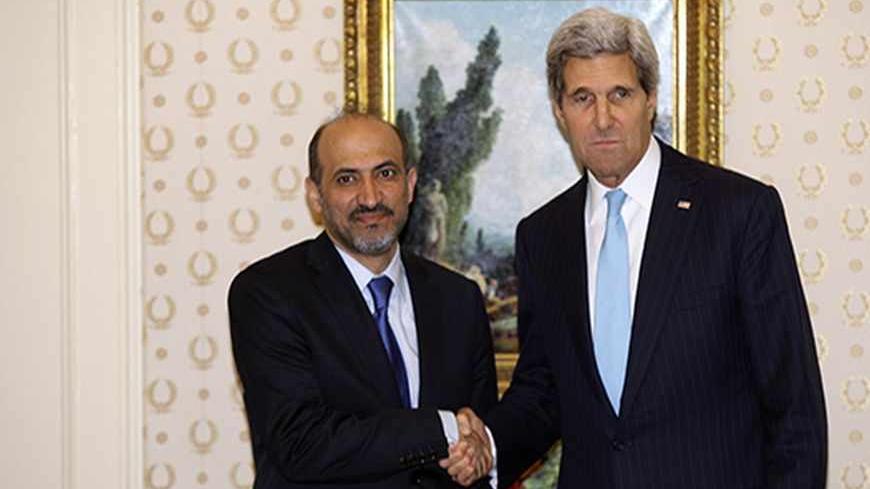 The passage of UN Security Council Resolution 2118 Friday, Sept. 27 was a breakthrough in US-Russia relations and arms control, marking a shift to a new, truly international diplomatic phase toward conflict resolution in Syria.

This is not to say the path will be clear or easy, or that there is any less sense of urgency to ending a war that has cost over 100,000 lives and produced millions of refugees.

In remarks announcing the passage of Resolution 2118 Friday, UN Secretary-General Ban Ki-moon said that he is aiming to convene the Geneva II conference in mid-November, adding that the Syrian opposition “should be represented in a single delegation [at Geneva II]. They should present their coherent and united voices of the Syrians inside and outside.”

Syrian Minister of Foreign Affairs and Expatriates Walid Moallem told Al-Monitor Saturday, Sept. 28 that his government refuses to deal with the National Coalition of Syrian Revolutionary and Opposition Forces. The coalition is backed by the United States and its allies and is widely accepted as the umbrella organization for opposition groups. Moallem claims the Syrian National Coalition is not representative of Syrians inside the country and squandered its legitimacy by supporting US military strikes in Syria, a charge dismissed by Khalid Saleh, spokesman for the coalition, in another exclusive interview with Al-Monitor.

Moallem’s charge against the coalition could be normal diplomatic wrangling, as Saleh points out, or a more focused strategy by the Syrian government to drag out the negotiations over, and perhaps during, Geneva II until 2014, when previously scheduled elections in Syria would become the mechanism for a political transition. There is a view in Damascus that this is an election that Syrian President Bashar Al-Assad, if he decides to run, could possibly win.

Moallem also told Al-Monitor that seven of the chemical-weapons sites his government has reported to the Organisation for the Prohibition of Chemical Weapons (OPCW) are in areas where armed rebel groups are operating. Here, Moallem is putting the spotlight for compliance on opposition forces, invoking the section of Resolution 2118 urging “all Syrian parties and interested member states … to work closely together and with the OPCW and the United Nations to arrange for the security of the monitoring and destruction mission, recognizing the primary responsibility of the Syrian government.”

Saleh responded to this charge by reasserting the coalition’s commitment to the elimination of chemical weapons, saying, “We don’t know where the chemical weapons are hidden. … We have cooperated with the UN inspectors; we have provided security when they entered liberated areas. We will continue to do that. We want to get rid of chemical weapons."

Skeptics of the chemical-weapons deal who charge that it could collapse because of Syria’s obstruction are off the mark. There will of course be fits and starts, and technical questions on implementation, but that is normal in such an undertaking. OPCW officials are quoted today, Sept. 30 in The Washington Post as praising Syrian cooperation so far as "businesslike and efficient."

The real trend is that with the passage of Resolution 2118, the Syrian government is recasting itself as both a constructive player in the elimination of weapons of mass destruction and a front-line combatant against terrorism in Syria, with a longer view on elections in 2014, thereby attempting to shift the spotlight to what it perceives are the limitations of the opposition in meeting the demands of the UN resolution. Over time, according to this score, the demands for regime change will dilute as progress is made on chemical weapons, attention is focused on terrorists in Syria and worldwide and the urgency of a cease-fire to end the killing elevates in priority.

From an American political perspective, this trend may be considered "normalization" of the approach to Syria through international institutions and diplomacy, rather than through unilateral, White House-driven action.

The Obama administration, immersed in a domestic political battle over the Patient Protection and Affordable Care Act and the budget, may not mind getting Syria off the front burner. The internationalization of the diplomatic track is more in sync with US public opinion. According to a CBS/New York Times poll last week, 68% do not believe the United States has a responsibility to “do something” about the fighting in Syria; 82% favor the US-Russia agreement on Syria’s chemical weapons; 57% oppose airstrikes if Syria does not comply and 68% do not believe the United States should distinguish civilians killed by chemical from those killed with other weapons.

US diplomacy and engagement with Iran parallels this trend toward diplomacy in Syria. Iran has welcomed the Geneva II initiative and offered to facilitate negotiations between the Syrian government and opposition forces.

In his speech to the UN General Assembly, Iranian President Hassan Rouhani said, “We defend peace based on democracy and the ballot box everywhere, including in Syria, Bahrain, and other countries in the region.”

In side meetings in New York, Iranian officials distinguished between negotiations between the Syrian government and the “opposition” and combatting terrorists in Syria.

US officials now seem willing to allow Iran a seat at Geneva II, once Iran formally accepts the parameters of the June 2012 Geneva Communiqué.

On the nuclear front, Iran’s commitment to work within the UN Security Council in a businesslike way is a breakthrough for a negotiating forum that has, until now, been considered by Iran a mechanism of pressure rather than compromise.

According to a CNN/ORC poll released today , 76% of Americans favor diplomacy with Iran to prevent a nuclear weapon.

The beginnings of a diplomatic thaw between the United States and Iran left delegates at the UN spinning, especially those who have advocated confrontation with Iran, rehearsing tired refrains which seemed to have started to test the patience of US officials.

There is the reasonable concern, of course, that Iran’s actions need to match its words, such as on Bahrain, as Foreign Minister Sheikh Khalid Bin Ahmed Al-Khalifa told Al-Monitor. Sheikh Khalid also advised that regional countries should not be left behind by this trend in US-Iran relations and find ways to benefit from this change.