Khalid Saleh, spokesman for the National Coalition of Syrian Revolution and Opposition Forces, says that opposition groups on the ground will support UN teams tasked to eliminate Syria’s chemical weapons. 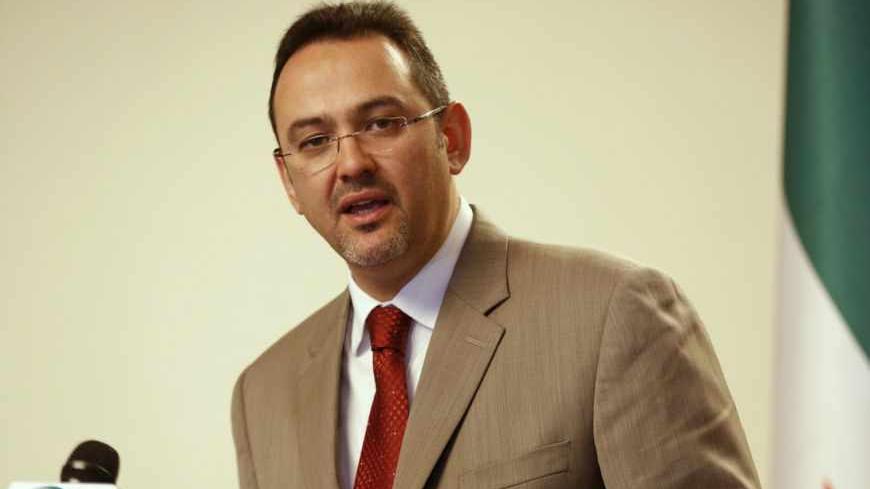 Khalid Saleh, spokesman for the National Coalition of Syrian Revolution and Opposition Forces, said that the coalition is preparing to lead the opposition delegation to the Geneva II conference on Syria and will provide on the ground support for UN teams seeking to eliminate Syria’s chemical weapons, as called for in UN Security Council Resolution 2118.

"The Syrian coalition is the umbrella group which will form the delegation that is going to go and negotiate with Assad," Saleh said, adding that coalition leaders are en route to Syria to meet with a wide range of revolutionary, armed and civil society groups in preparation for Geneva II.

UN Secretary-General Ban Ki-Moon said Friday that the opposition would be represented at Geneva II as a single delegation.

"The Syrian coalition has been recognized by over 120 countries as the official representative of the Syrian people to be the umbrella group to represent the opposition during the Geneva conference," said Saleh, who accompanied coalition President Ahmad al-Jabra to New York for meetings last week at the UN General Assembly, including with Ban, UN Special Representative for Syria Lakhdar Brahimi, US Secretary of State John Kerry, and others.

Speaking by phone in response to an interview request with the coalition president, Saleh dismissed the charge by Syrian Foreign Minister Walid Moallem that the coalition had lost its legitimacy by supporting armed strikes against Syria.

"When you are talking about issues of legitimacy, you have somebody [Syrian President Bashar al-Assad] who has used chemical weapons, which were banned in 1925, and used them against his own people," said Saleh, adding that the Syrian government is responsible for over 100,000 lives lost in the Syria war.

Saleh added that the Syrian government is "saying that while there are many parties, that no one has ever heard of inside of  Syria, those are the ones that would represent the opposition, so it is obvious that he is creating his own parties from people who are not known and trying to take them to Geneva."

This may be a "typical negotiating process," Saleh said.  "I think they are just trying to waste time."

The US-Russia agreement “achieved the second goal, but they are silent on the first issue, of accountability," Saleh said. "Assad continues to walk free from justice while the Syrian people continue to be killed."

Saleh explained the loss of 11 opposition groups from the coalition last week as a "disconnect," which coalition leaders are addressing, while noting that  Jabhat al-Nusra, which was one of the 11, is not recognized by the coalition.

Saleh explained the frustration among many opposition groups fighting in Syria.

"All of these statements coming from these groups, they feel as if they have been abandoned by the international community," Saleh said. "They feel that the political process is not going anywhere."

The coalition supports both the political process and the armed struggle, Saleh said. He explained that the coalition is more representative than ever, especially with the addition of Kurdish National Council. The coalition represents Syrians from all walks of life and which share the same vision of "a democratic, pluralistic society," Saleh said.

Saleh disparaged Moallem’s comment to Al-Monitor that some of the chemical sites which Syria has reported to the UN are in areas where armed opposition groups are operating.

"Maybe Moallem should have listened to his leader. Less than a week ago Assad said the chemical weapons are fully secure and are in areas that they control," Saleh said.

"We don’t know where the chemical weapons are hidden," Saleh went on, adding: "We said, we have cooperated with the UN inspectors, we have provided security when they entered liberated areas, we will continue to do that.  We want to get rid of chemical weapons."

Andrew Parasiliti is editor and CEO of Al-Monitor