Divisions among Syrian opposition groups may be hindering Geneva II. 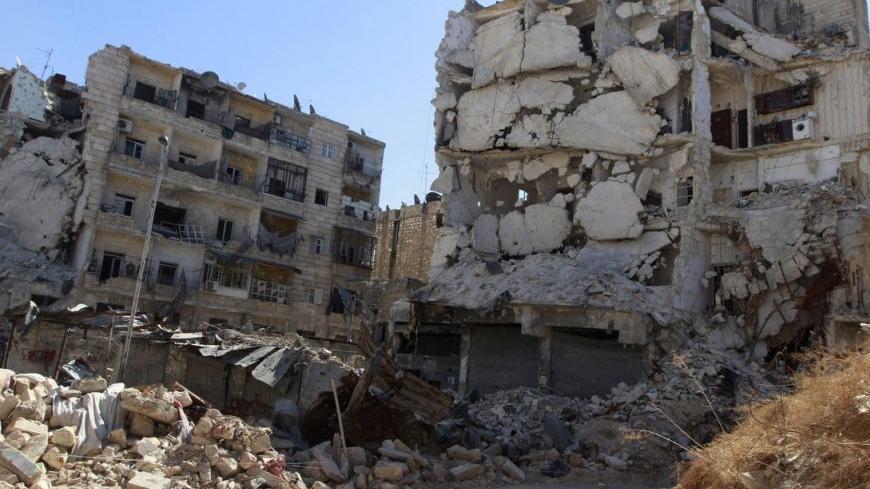 Edward Dark (a pseudonym for a Syrian activist living in Aleppo) reported on the deepening rift between Syrian opposition groups in Aleppo.

Dark, who has provided a rare, inside view of life in Aleppo for Al-Monitor readers, describes divisions between groups associated with the National Council of Syrian Revolutionary and Opposition Forces and the Free Syrian Army (FSA), on the one hand, and Islamist groups, those backed by Gulf countries and those affiliated with al-Qaeda, on the other.

The rifts have evolved from skirmishes into all-out battles for control, with the al-Qaeda-affiliated Islamic state of Iraq and al-Sham (ISIS), gaining the upper hand.  Dark explains:

“That the coalition calls for a democratic civil state, whereas the Islamist rebels call for an Islamic Sharia state, may be a red herring. More likely the issue at hand is one of a simple power struggle. The rebels were unnerved by the coalition's recent moves to appoint Ahmad Saleh Touma as head of an opposition government, which would start administering the regions of Syria outside the regime's control.

They feared their hard-earned territory, which they sacrificed much blood and treasure to gain, would be taken away by bureaucrats who had never fired a shot. In fact, the wording of the statement by the rebels specifically makes mention of Touma's government and their refusal to recognize it. It's no secret inside Syria that rebels have little faith in the coalition, and would never allow it to govern. The fact that it also is unpopular with the ordinary people means it has little traction on the inside.”

ISIS has taken responsibility for a Sept. 29 suicide bombing in Erbil, capital of the Kurdistan region of Iraq, allegedly in response to the Kurdistan Regional Government’s support for Kurdish groups battling jihadists in Syria.

Dark reveals a power struggle on the ground in Aleppo that is, for now, being lost by the Coalition and the FSA.  ISIS has challenged the legitimacy of the more disparate Free Syrian Army forces while at the same time imposing a Taliban-like order in areas it controls:

“ISIS’ pretext was that the rebels were in league with American and German intelligence, and had met US Sen. John McCain, R-Ariz. This was a weak excuse, given that ISIS had already announced its intentions in Syria. It wanted to set up its own Islamic state, and needed to conquer as much territory as possible. Smaller rebel factions would prove to be no match for their fierce and disciplined fighters, particularly considering many smaller rebel militias were less interested in fighting and more interested in looting.”

Dark’s analysis complements that of Gabriele Del Grande, who reported from Aleppo for Al-Monitor that the rift between Islamist fighters and the Free Syrian Army has compromised the original intentions of the uprising against the regime of Syrian President Bashar Al-Assad.   She reports on the fear associated with ISIS checkpoints, and quotes a Syrian activist:

“When the revolution started, we used to sing ‘One, one, one. The Syrian people are one.’ Nowadays, the most popular song goes like this: ‘Alawites wait for us! We are coming to slaughter you! We will cut your throats.’ The activists abroad will tell you that it is not true, that we are a moderate people and sectarianism will not prevail. But this is true only of us civilians, not for those who fight.”

Mohammad Ballout, writing for As-Safir and translated by Al-Monitor, describes the military surge and political strategy employed by ISIS to take over areas previously held by disparate rebel forces associated with the Free Syrian Army:

This is especially true, since the majority of Syrian defectors live in Turkish camps and refuse to join the ranks of the FSA, which recruits civilians with no military experience, compared with jihadists in Iraq or Afghanistan and to the military savvy of the ISIS fighters.”

The divisions on the ground track what for now appears to be stalled progress on diplomacy toward Geneva II, despite the boost given to a “Geneva II conference by UN Security Council Resolution 2118.

On Sept. 27, UN Secretary-General Ban Ki-moon observed: “The United Nations has completed all the preparatory work. President Assad has stated that he is prepared to send a delegation to Geneva, and the Syrian National Coalition has expressed its willingness to engage.”

Ban also said that he was aiming to host Geneva II in mid-November, while adding that “ The opposition should be represented in single delegation. They should present their coherent and united voices of the Syrians inside and outside. This is very important. The Geneva Communiqué of June 30 last year clearly states that the Syrian Government and opposition should be represented in one delegation.”

The next day, in an exclusive interview with Al-Monitor, Syrian Foreign Minister Walid Muallem refused to accept the coalition as the organizing body for the Syrian opposition, claiming it lacked legitimacy inside Syria and had squandered its credibility by backing a US military strike against Syria, which was rebutted by coalition spokesman Khalid Saleh in a separate interview.

Iranian Foreign Minister Javad Zarif seemed to back Moallem’s stance when he told Al-Monitor on Sept. 30 that Iran supports “intra-Syrian negotiations between groups who are committed to the sovereignty and territorial integrity of Syria and hopefully do not want to have their country bombed out existence before they come to the negotiating people.”

Saleh further told Al-Monitor that there are indeed rifts that have been the result of a recent “disconnect,” as well as frustration by internal armed opposition groups with the slow progress of  the political track.   He dismissed the charge as a tactic to “waste time" in the gamesmanship leading up to Geneva II, and fully expects the Coalition to lead the opposition delegation, given its support in Syria and internationally.

The push for Geneva II , at least for now,  is getting little help from those regional parties who back opposition forces and  who are frustrated by the potential warming in US-Iran relations and  the US-Russia framework leading to the resolution, and would have preferred a US military strike on  Syria.