Opposition activists are being targeted by al-Qaeda fighters in rebel-held areas in northern Syria. 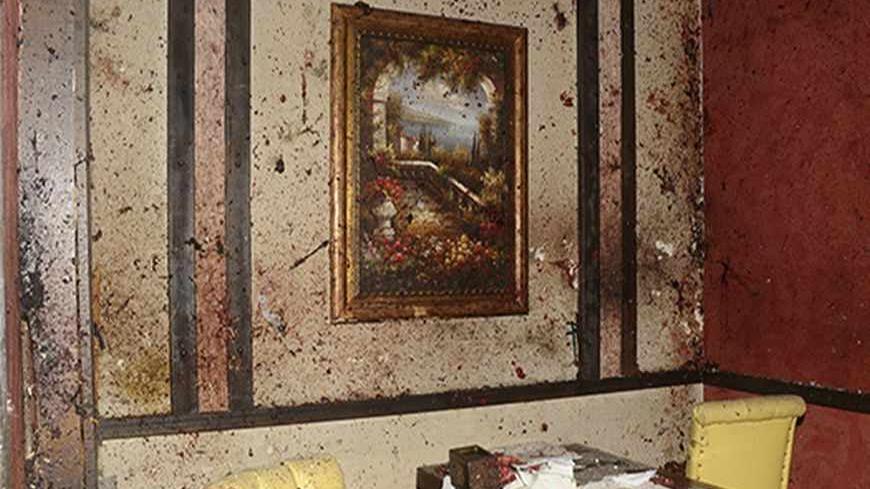 Blood covers the walls and furniture of a restaurant after a suicide bombing, at al-Basel Sport city in Aleppo, Aug. 22, 2013. - REUTERS/George Ourfalian 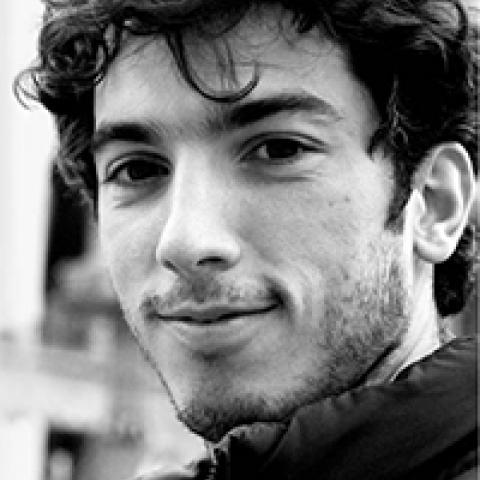 ALEPPO, Syria – This is my third visit to Aleppo in the last year, but the first time that I saw fear in the eyes of my Syrian activist friends accompanying me. They are not afraid of Bashar al-Assad's regime or of bombs or of the Free Syrian Army (FSA). Rather, what scares them are the checkpoints manned by fighters from the Islamic State in Iraq and al-Sham (ISIS — also known as the Islamic State in Iraq and Syria), the main al-Qaeda force in Syria. Kidnappings and executions have been steadily increasing.

Hazim al-Azizi, a photographer at the media center in Azaz, was the latest Syrian activist to be killed by al-Qaeda. An ISIS sniper shot him on Sept. 18, when the town of Azaz, 3 kilometers (1.8 miles) from the border with Turkey, became the scene of two days of heavy fighting between the ISIS and FSA. On the same day, ISIS gunmen kidnapped Mohammed Nur Amuri, director of the Azaz media center, along with nine other activists in his office. One man, Abu Mohammad, managed to save himself.

Abu Mohammad was supposed to go to Azaz to install an aerial for a free radio network, Radio Nevroz, which was to begin broadcasting in Kurdish and Arabic to the opposition-controlled areas of northern Syria. When he heard that the ISIS was involved in fighting there, he canceled everything. In his opinion, the presence of al-Qaeda in Syria poses a serious threat to the entire civilian activist movement.

In an interview in Kilis, a Turkish town on the border with Syria, Abu Mohammad told Al-Monitor, “For us, it is extremely dangerous even just to move around. We are civilians, without any military escort when we travel. The areas in the countryside of Aleppo and Idlib have become a no-man’s-land, and the slightest suspicion is enough to get you killed by the men of ISIS.”

According to Wassim, however, the real problem is not al-Qaeda, but the ever-widening rift with the FSA. An activist living in Aleppo, Wassim explained, “When the revolution started, we used to sing ‘One, one, one. The Syrian people are one.’ Nowadays, the most popular song goes like this: ‘Alawites wait for us! We are coming to slaughter you! We will cut your throats.’ The activists abroad will tell you that it is not true, that we are a moderate people and sectarianism will not prevail. But this is true only of us civilians, not for those who fight.

“Well half of the fighters in the FSA believe they are fighting a war against the Alawites, and more generally against the Shiites, as a result of Bashar’s alliances with Iran and Hezbollah. They are simple young men, from the poorer classes. They have no education, and the weapons have gone to their heads. They have become cruel. Killing has become ordinary. They only want their enemy’s blood. We took to the streets for freedom and dignity, not to substitute the regime with another regime just as bloodthirsty.”

As Wassim spoke, Shiro and Bushkin nodded their heads. All three of them belong to the Kurdish Coordination Center for Brotherhood (Tansiqiyyah al-Ta’akhi al-Kurdi), a group of young Arab, Kurdish, Muslim and Christian middle-class university students. Their office is located in an apartment on the second floor of a shabby building that has been hit twice by government bombs.

The office is also used for shelter by activists in the area and by their guests passing through Aleppo, like me and the Syrian photographer who arrived the night before from Beirut. Cigarette smoke fills the room like a fog. Speakers blast the playlist of the revolution. The young men sing loudly, to pluck up their courage and to silence the shooting outside.

The walls of the room, stained yellow from smoke, are covered by banners and flags. On the largest poster is written the name Kamal. He was one of the founding members of the coordination center and was last seen a year ago, when two policemen in plain clothes kicked and pushed him into a car and drove away. No one has since heard anything about him. Whether he continues to be detained, or is alive or dead, no one knows.

Kamal is not the only person missing. Pesheng is also not with us this evening. He has been bedridden for a few weeks in a hospital in Gaziantep, Turkey, waiting to have his knee reconstructed. It was shattered by mortar shrapnel that hit him while he was trying to show the world the horrors of the war through his digital camera.

Hazim might be the next to be hit. He roams the frontlines with his small telecamera, but does not seem to be scared. On the contrary, he left a quiet job in Turkey as a web designer to be in Aleppo.

He explained, “I always watched the news on television. Massacres, deaths, injustice. I used to feel guilty because I was fine, until one day when I asked myself whether my blood was more valuable than the blood of my brothers and sisters. The day after, I left for Aleppo.”

As soon as he arrived, Hazim organized the Sumu Media group in the Bustan al-Qasr area. They make television newscasts for Arabic satellite channels and are now preparing a cartoon on the war as well as producing the graphic art for Ink, Pen and Gun, one of the first free weeklies in Aleppo.

“This is my city, this is my people. And I want to be here. I know that I could die even today. But I would die happy, knowing that I have given my contribution to the revolution. Because it is true that we have made many mistakes — a divided opposition, plundering by the Free Army, Islamic courts, al-Qaeda. … Nevertheless, we are right. And history will vindicate us.”

They may be right, these weary activists of Aleppo, but they are only a tiny and distant fraction of that extraordinary and peaceful movement of millions of Syrians who between 2011 and 2012 filled the streets to challenge the regime. Thousands of them were shot during the demonstrations. Thousands died from torture in the regime's prisons. Thousands more remain in jail, and thousands of others have fled across the border, some simply to save themselves, others because they no longer believe in the revolution.

Abu Jafra is among the nonbelievers. I met him in a literary cafe in Afrin, a Kurdish town in northern Syria. He is a university professor, around 60, secular and a former communist. Before the interview, he asked me if the road to Aleppo was safe. His two daughters are trapped in a loyalist area, and he is afraid they will die from FSA bombs. He is even more scared that if travels along the road to get them, he will be stopped by al-Qaeda fighters and killed because he is a Kurd and does not believe in God. This fear suffices for him to declare the revolution finished.

“I remember the first six months of the Syrian revolution as an extraordinary moment,” Abu Jafra recalled. “Our movement was spontaneous, secular, of diverse convictions and opinions. But now it is over. Now the weapons rule, not the good intentions of those few and brave activists who still believe in it. Our objective was to build a free and democratic Syria. In order to achieve it, it is not enough for the Assad regime to fall. We need ideas, but the war has killed them too.”

Gabriele Del Grande is an Italian journalist and writer. In 2006, he founded the blog Fortress Europe, which documents the victims of immigration in Europe. Since 2011, he has been covering the Arab Spring and the wars in Libya and Syria. He is a contributor to Taz, Time and Vocativ as well as RAI, RSI, and Radio Tre.