A visit to Turkey’s border with Syria provides context for the complexity of Ankara’s choices in dealing with the Syria war. 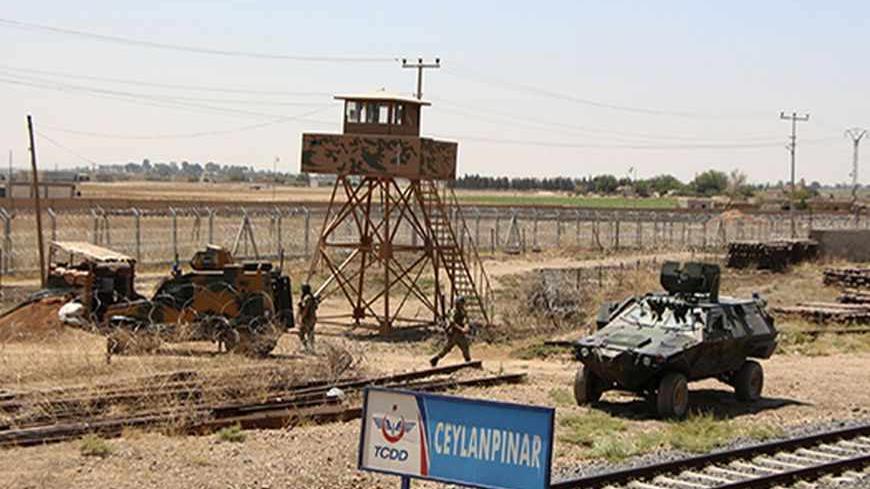 Turkish soldiers patrol the Turkish-Syrian border in the town of Ceylanpinar in Sanliurfa province, July 19, 2013. - REUTERS

I spent Sept. 18–19 on the Turkey-Syria border. I didn’t confine myself to Nusaybin, on the Turkish side of the border, which is adjacent to Qamishli, the largest city in northern Syria and a population that is 80% Kurds. On the night of Sept. 18, a night before a full moon, I was at Derbesiyeh, 60 kilometers west of Qamishli and the only border crossing open to food and medicine shipments to Syrian Kurds. I settled on a railroad track to watch some 40 trucks ferrying into Syria 400 tons of supplies collected from Turkey. I spent several hours on the tracks — “ground zero” on the Turkey-Syria border.

The collection and shipment of relief assistance is being coordinated by the Nusaybin municipality, which is why the mayor of Nusaybin, accompanied by Turkish gendarmerie, was discussing the technical issues of transferring supplies via the railroad to officials of the Supreme Kurdish Council, who are responsible for governing Syria Kurds on the other side.

One must come to the Turkey-Syria border to obtain information impossible to get anywhere else. For example, the population of Nusaybin, previously around 80,000, has increased to 100,000, with relatives escaping from Syria. People in Nusaybin say Qamishli had around 350,000 people before the conflict, but is now around 700,000 as a result of internal displacement. The people of Nusaybin are good sources for news because every one of them has relatives in Qamishli, and every piece of information from Syria instantly reaches Nusaybin.

The reason no relief supplies are transferred directly between the two adjacent towns is quite interesting: Qamishli is the only place where there are still Syrian regime personnel working at the crossing to Turkey and at the airport.

Inside Qamishli, however, the Supreme Kurdish Council is in control, and it is not a secret that the Democratic Union Party (PYD), identified as the Syrian wing of the Kurdistan Workers Party (PKK), dominates the council. Until recently, the Syrian side of the crossing was open, but not the Turkish side. Then Turkey opened its side, but the Syrians closed theirs. The well-oiled rumor mill of Nusaybin attributes this to PYD leader Salih Muslim’s official visits to Turkey. The Syrians closed the crossing after the PYD leader traveled to Ankara at the end of July and in mid-August. It is thought that the Damascus regime was displeased about the PYD’s contacts with Turkey.

Derbesiyeh is also under PYD control, and through it the Supreme Kurdish Council. That is the only other crossing into Turkey west of Qamishli. The Turkish government reportedly opened the Derbesiyeh crossing after Muslim made an issue of it and also after pressure by Turkey’s Kurds.

On the Turkish side of the crossing, there is a town that was called Derbesiyeh until 1965, when it was renamed Senyurt. About 1,500 people live there now. Some 70,000 live on the Syrian side of Derbesiyeh.

With illumination provided by the moon, I saw a grader noisily at work in Senyurt. When I asked where Derbesiyeh is, that is, Syria, the response was laughter and then, “It is only 10 meters from here.”

I walked 10 to 20 meters and saw that the grader was working on the railroad track. The railroad is the border. The grader was preparing a level crossing so Turkish trucks could easily unload their cargo on the Syrian side. The work was so noisy, the mayor of Nusaybin had decided to cross the border to better coordinate the delivery effort.

I was to go with him, but our gendarmerie escorts would not allow us. This restriction is why assistance delivery is organized by yelling over the tracks or through mobile phones.

Another 60 kilometers (37 miles) to the west, at Ceylanpinar/Serekaniye, clashes were ongoing between armed Kurdish defense units and Jabhat al-Nusra, al-Qaeda’s Syria extension, and the Islamic State of Iraq and al-Sham (ISIS). The area controlled by the PYD is at least 120 kilometers (75 miles) of unbroken territory. In the area 60 kilometers west of Serekaniye (in Kurdish, but Ras al-Ain in Arabic) to the town of Abyad, one finds Arabs. Jabhat al-Nusra and ISIS are active in the region, thus disrupting the continuity of PYD control from Serekaniye to PYD-controlled Kobani (Ain al-Arab), directly opposite Suruc, in Turkey.

Between Kobani and the entirely Kurdish town of Afrin lies the town of Azaz, 5 kilometers (3 miles) from the Turkish border. Through Azaz is the shortest route to Aleppo. While under the control of the Free Syrian Army (FSA), it was an important base for Turkish support flowing to the Syrian opposition. The key word here is “was,” because on Sept. 19 when I woke at Nusaybin, word came that ISIS had taken Azaz from the FSA.

The New York Times reported at length about this development on the same day, emphasizing the importance to Turkey of the ISIS taking control of Azaz: “Azaz sits just south of the border crossing on the road to Aleppo, Syria’s largest city, and has served as an important artery for the rebellion in northern Syria, allowing arms, fighters and supplies to move in and refugees fleeing the violence to leave the country. Its seizure is likely to alarm Syria’s neighbors. Turkey, which has vocally supported the fight against forces loyal to President Bashar al-Assad and allowed fighters and arms to flow freely across its southern border, now faces a bold Qaeda affiliate.”

Ankara now faces the “lesser of two evils” dilemma and must make up its mind, as warned several times in the past — either be neighbors with Syrian territory controlled by al-Qaeda or with Kurdish territory dominated by the PKK/PYD.

Turkey’s southeast and Syria’s northeast and northwest are now becoming a unitary and integrated geopolitical area. I learned at Nusaybin that this was also the impression of imprisoned PKK leader Abdullah Ocalan. The daily Ozgur Gundem, known to be close to the PKK, printed a two-page interview with Selahattin Demirtas, the co-chair of the pro-Kurdish Peace and Democracy Party. The subject of the interview was the views Ocalan conveyed to Demirtas at a long meeting on Sept. 15.

Demirtas offered the following: “We discussed Rojava at length. [Ocalan] says al-Nusra, al-Qaeda and gangs like them can’t possibly hold on to Rojava. They either will leave through a mutually agreed cease-fire or confront everyone in Rojava, who will exercise their right of self-defense. He says if the Turkish government wants a solution in Syria, it must cooperate with the collective leadership of the people instead of seeing them as a threat. Turkey must think of Rojava as part of the solution in a unified Syria. There will never be a unitary, monolithic state structure again in Syria. Everyone sees this reality and says it is time for Turkey to deal with different segments. That is the only way out.”

That may well be Ocalan’s “realistic view” of Syria. The question is will Turkey accept or be able to accept that Syria will never again be a “unitary, monolithic structure”? If not, can Turkey adopt a perceptible attitude against groups such as al-Nusra and ISIS? Can Turkey put an end to its image of having assisted these groups against the Kurds?

Al-Qaeda is now fighting not only the Kurds, but also the FSA right on Turkey's border. The position Ankara takes toward “a civil war within a civil war” will have major ramifications for determining Syria and Turkey’s near-term futures.

by Murielle KASPRZAK and Joseph SCHMID | AFP | May 26, 2022
END_OF_DOCUMENT_TOKEN_TO_BE_REPLACED