Turkey’s Kurdish Strategy Muddled By Talk of US Syria Strike

A slowdown in the peace process with the PKK and anticipation of a US military strike has pushed the Rojava, or Western Kurdistan, opening to the back burner. 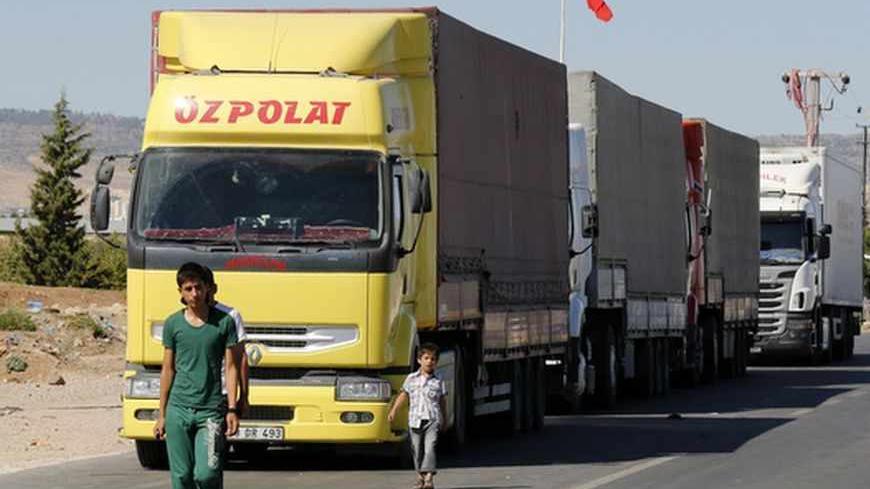 Locals walk past trucks lined up at the Oncupinar border crossing on the Turkish-Syrian border in the southeastern city of Kilis, Sept. 5, 2013. - REUTERS/Umit Bektas

The opening of the border between Turkey and Syria's Rojava (Western Kurdistan), which we have been treating at different times with optimism, caution and suspicion, has not achieved any of its desired results.

On Aug. 6, when I met in Istanbul with a representative of the Syrian Kurdish Democratic Union Party (PYD), he told me that they were asked by Turkish Foreign Ministry officials to "wait 10 days for good developments." The most significant development expected from the dialogue Ankara established with PYD co-chair Salih Muslim was the opening of border crossings between Turkey and Rojava, the Kurdish region in Syria’s north. For the Kurds, the opening of the crossings would be an important sign of the end of Turkey’s hostile attitude, held ever since the PYD took control of the region.

Last weekend, I spoke with the same PYD official again after his return from the border near Urfa and Suruc. He said that promises had not been kept.

"Turkish officials don’t even take my phone calls now," he complained. Turkey’s demand in response to its rapprochement with Rojava was "for the PYD to clarify its position and to join the opposition fighting [Syrian President Bashar] al-Assad. The PYD official said, "If Turkey had recognized and assisted us, we could have had more leeway in joining the Syrian National Coalition [SNC]. But lack of confidence between us is still a serious issue."

Salih Muslim, in a statement to Reuters on chemical-weapons use in Syria, said, "The regime in Syria ... has chemical weapons, but they wouldn't use them around Damascus, 5 km from the (UN) committee which is investigating chemical weapons. Of course they are not so stupid as to do so." He believes the PYD would not blindly join the ranks of the SNC, as Turkey wishes.

While the borders controlled by the Syrian opposition are open, three crossings under Kurdish control are closed, even for humanitarian assistance, allowing no dialogue with the Kurds. As a result of popular demonstrations the security forces tried hard to suppress, the first humanitarian assistance finally reached Dirbesiye via Senyurt and Qamishli via Nusaybin on Aug. 8 and again to Dirbesiye in the last week of August. The shipments were arranged by the Turkish Red Crescent, as agreed, and delivered to the Kurdish High Council representatives.

Humanitarian assistance does not solve the crisis

With Rojava increasingly becoming an internal issue for Turkey under pressure from Kurdish and leftist parties, the government had to at least be flexible in humanitarian assistance. Although a dim green light was given for aid, it did not mean that the Kurdish request to open the crossings was fulfilled.

The closed crossings recently surfaced with the issue of Kurdish migration from the region because of clashes with the Syrian opposition. In the migration from Rojava to Iraqi Kurdistan, hardships arising from the closure of the crossings became as important as security concerns. According to Mazhar Zumrut, a member of the Council of Coordination of Relations with Rojava who spoke to Al-Monitor, while there was migration from Tel Abiad, Raqqa, el-Baba and Menbic, where Arabs and Kurds are mixed, migration from Kurdish-dominated Qamishli, Hassakeh and Dirbesiye stems from peope not being able to meet their basic needs.

The assistance that reaches them is not a panacea. Zumrut said, "Rojava is like three islands. Assistance we send is distributed in Jazeera — that is, in the area from Derik to Serekaniye. There is a Jabhat al-Nusra checkpoint between Jazeera and Kobani. We can’t reach there. We can’t get any assistance to Afrin, which is under Free Syrain Army [FSA] siege. We are asking Turkey to open a crossing to Afrin from Turkey’s Islahiye."

Although not all the people escaping are Kurds, PYD officials see it as a design to cleanse the area of them. PYD co-chair Asya Abdullah made the following assessment in Diyarbakir on Sept. 1: "There is a particular policy in practice to augment departures from Rojava by creating waves of migration. This is why all border crossings are kept closed. They are trying to change the demographic structure of Rojava by settling groups they will import following the departure of the Kurds. If the crossings between Iraqi Kurdistan and Rojava, and the border crossings to Turkey at Afrin, Kobani and Jazeera are opened to allow trade and humanitarian assistance, the problem of migration will be solved.”

Redur Halil, spokesman for the Popular Defense Committees, sees Kurdish migration as the goal of Kurdish-Arab clashes in what he describes as a “new Arab Belt policy.”

Kurds see the opening of the crossings by Turkey and Iraqi Kurdistan as vital to stop the migration and to defend Rojava.

Syrian Kurdish activist Shirvan Ibrahim outlined to Al-Monitor the common argument of the Kurds: "In the last year, not a stone was thrown to the Turkish side over more than 400 km of border controlled by the Kurds. Have a look at the segment under the control of the FSA and Jabhat al-Nusra. Turkey was hurt badly by attacks including bombs from that sector, but instead of closing the crossings there, it closes the crossings to Rojava, where it has no problems and imposes an embargo on Rojava. Actually, Turkey is not punishing the PYD, but the Kurdish people. Jabhat al-Nusra, which is fighting the Kurds, is freely using other crossings."

Turkey’s one-step-forward, two-steps-back policy is the result of disruptions in the peace process with the Kurdistan Workers Party (PKK) in Turkey. Ankara doesn’t want to open the gates to the PYD before ensuring the direction of the process with the PKK. Another factor is that Ankara sees a possible American intervention in Syria as a great opportunity to topple the regime and doesn’t want to tie itself to the situation along the border. But if the big picture in Syria doesn’t turn out to be as Ankara wants, Turkey will have to get closer to the PYD. If the Assad regime stays in power longer, it is almost impossible for Ankara to restore its former relations with Damascus.

Consequently, Turkey may have to try in Rojava strategic relations similar to those it established with the Kurdistan Regional Government in Northern Iraq.