Border Clashes Confront Turkey With 'Afghanistan of the Levant'

Clashes adjacent to Turkey's border with Syria have the potential of causing a lot of headache for Turkey, not only for their security implications but also for the international image of Turkey and the country's relations with allies, primarily the United States. 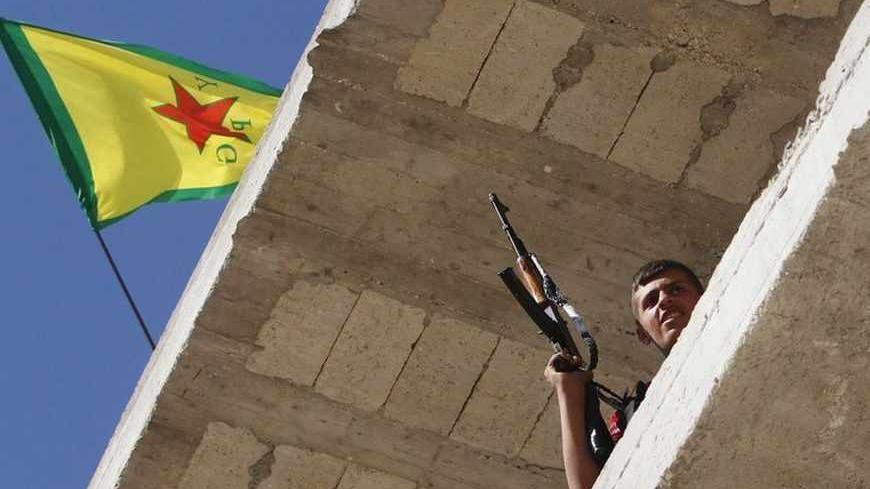 Turkey’s longest border is its 911-kilometer [566 miles] one with Syria. A major segment of this border line is simply a railroad track on flat land. The flat terrain on the Syrian side that extends to Al Jazeera region abutting Iraqi Kurdistan and oil fields in Hassakeh province for the past two weeks has been the new battlefield pitting Kurds against al-Qaeda-derivative armed groups.

While Syrian President Bashar al-Assad is on the verge of securing Damascus and, even more important, is about to take back the country’s third-largest city, Homs — which controls a strategic junction — he isn’t moving a finger as far as the developments on the Turkish border in Syria’s northeast are concerned. Most likely he doesn’t want to spread his forces over a wide area far from the center. For him, the priority is to keep control of the coastal region with Latakia at its center and where his sectarian constituency dominates. This turns Syria’s north and northeast adjacent to Turkey into a battlefield between the Kurds, who are seeking a news status for themselves, and the Sunni groups either affiliated with al-Qaeda —  which aspires to set up a state that will also incorporate Iraq’s Sunni regions — or which are in a ideological-political relationship with al-Qaeda.

It is clear that Syria has become Lebanonized, reminiscent of its neighbor during the civil war there. There is no going back to the Syria of March 2010. In November 2012 at the Halifax Security Forum that I participated in as a speaker, Sen. John McCain was sitting right opposite me. The words he uttered while looking into my eyes, “Syria has ceased to exist as we have known it until now,” were not prophetic for me but it was nevertheless recorded as an important sound bite of the forum. The prospects a year later have not surprised me as a Turkish observer who has been trying to follow the developments as closely as possible, but they seem to have propelled Turkey into an impasse beyond any prediction.

The point we have reached is offering Turkey the option of having either Kurdistan as its long-border neighbor to its south or “Afghanistan of the Levant.”

Fierce clashes along our Syrian border between the PYD, described as an extension of the PKK, and al-Qaeda-linked organizations such as Jabhat al-Nusra and the Islamic State of Iraq and Syria, don’t offer Turkey any other option.

Recep Tayyip Erdogan's rule in Turkey, which after the fall of 2011 placed all its eggs into the basket of deposing the Assad regime, turned toward a Faustian pact when Assad’s resilience improved with the intensive assistance of Iran and Russia, two neighbors of Turkey, and no desired level of support came from allies, primarily the United States. That is why Turkey turned a blind eye to pro-al-Qaeda and Salafist groups fighting the Assad regime by using Turkish territory.

A practical benefit of this blind eye was its potential of preventing the PYD from taking control of the border region. In other words, Turkey was thus calculating to prevent a future independent or at least an autonomous Kurdistan in the area the Kurds call West Kurdistan, or Rojava in Kurdish.

But starting the solution process with the Kurds in Turkey made the imprisoned PKK leader Abdullah Ocalan the key dialogue partner, and the PYD’s success in clearing out Jabhat al-Nusra from Kurdish settlements along the border made application of the Turkish policy impossible.

Two more elements have to be taken into account when discussing Turkish policy: First, at the May 16, 2013, White House meeting between US President Barack Obama and Turkish Prime Minister Erdogan, the American side put on the agenda the necessity of severing ties with Jabhat al-Nusra. Since December 2012, Jabhat al-Nusra has been on the US terror list despite the tacit opposition of Turkey. Second, the coup against Mohammed Morsi and the Muslim Brotherhood in Egypt, which Erdogan angrily opposed and continues to oppose, was for the most part a Saudi Arabian masterpiece; it was the Saudis, the Qataris with their new emir and Gulf countries that supported the coup regime in Cairo before anybody else. Egypt thus caused massive damage to the regional Sunni triangle that was backing the Syrian opposition.

As all these factors converged, Turkey performed a surprising U-turn by inviting the PYD leader Salih Muslim to Istanbul for negotiations. This was done not secretly through the National Intelligence Organization MIT, but openly as a guest of the Ministry of Foreign Affairs.

This development in itself was proof that Turkey could accept an  “autonomous Kurdistan,” not an  “Afghanistan of the Levant,” as the lesser of two evils and that Ankara had reconciled itself to this reality. No wonder Salih Muslim in various interviews and statements before and after he left Turkey disclosed that Turkey had flashed the "green light" for a new status for the Kurds. Turkey did not deny it.

Clashes between the PYD’s armed wing, YPG, and Jabhat al-Nusra escalated last week. Kurds are complaining that Turkey is allowing Jabhat al-Nusra to use its borders against the Kurds. Humanitarian assistance convoys for Syrian Kurds promised to Salih Muslim are still waiting on the Turkish side of the border because the crossings are closed.

Salih Muslim, who is expected to come to Turkey again in a few days, in an interview printed in the daily Taraf on Aug. 4, said he was promised that Jabhat al-Nusra would not be allowed to cross to Syria from Turkey. He said: "We discussed Turkey putting pressure on the Free Syrian Army and other opposition groups to isolate Jabhat al-Nusra. Promises were made. But last night [Aug. 2] we got reports from eyewitnesses that between 2000-2100 hours [8-9 p.m.] vehicles carrying weapons and ammunition crossed trough Gaziantep’s Karkamis crossing. Our people on the Syrian side confirmed these reports. The weapons were transferred to Arab villages west of Kobani, mainly to Shiyoh. They are planning to attack Kobani and civilians. Salafists killed so many civilians but the world remains silent. Now Kobani is next. It is impossible to understand how Turkey can allow this. If Jabhat al-Nusra is an enemy then this must be prevented. If Turkey opposes Jabhat al-Nusra, then it must be in on our side.”

When asked if Turkey was not keeping its word, Salih Muslim said he didn’t want to use such an expression to avoid negatively affecting the new dialogue with Turkey and admitted that the support for Jabhat al-Nusra could be “beyond the government’s will” and there could be some “deep forces” involved. Some of his words were interesting:

“For sure, weapons are still going to Jabhat al-Nusra via Turkey. And it was bizarre that while I was in Istanbul for meetings, FSA and Jabhat al-Nusra people were meeting in a hotel in Gaziantep to make plans to annihilate the Kurds. Now they want to implement these plans. Is it possible for the Turkish state not to be aware?”

Perhaps it is excessive optimism for the Turkish state to overcome its “Kurdish allergy” and “Kurdish phobia” it has fostered since the Independence. Don’t forget even Erdogan has not yet uttered the title of Massoud Barzani, who seems to be one of his good friends. He never calls Barzani the “president of Kurdistan Regional Government.” The government’s media organs still refer to Barzani as “Northern Iraq Regional Authority president.’’

When you combine the traditional Kurdistan phobia of the state and the Sunni instincts of the Justice and Development Party (AKP) in power, it may be easier to understand the covert assistance to Jabhat al-Nusra against Syrian Kurds.

Turkey will continue to face the options of being neighbors in its south either with Kurdistan or “Afghanistan of the Levant.”