Turkey’s Syria Policy in Shambles Over Support for Jihadists

A host of misjudgments by the Erdogan government about Syria, including reliance on radical Islamists, has led to new headaches for Turkey. 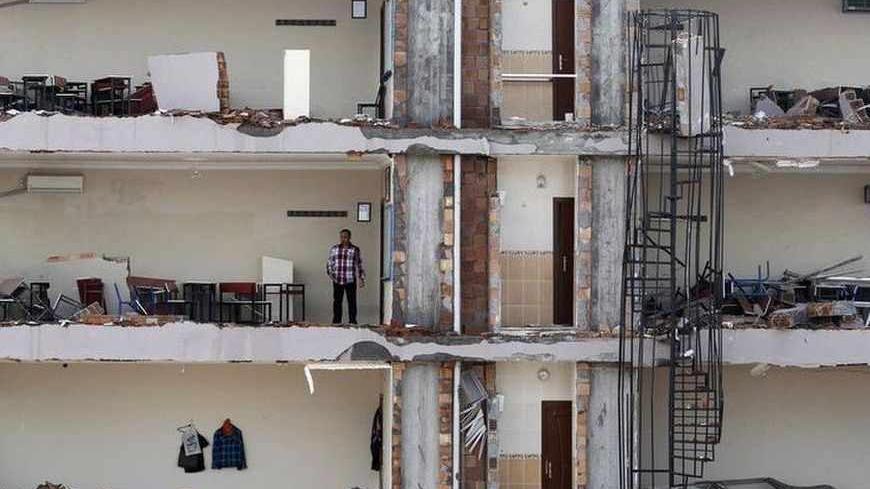 A man checks an apartment in a damaged building at the site of a blast in the town of Reyhanli, Hatay province, near the Turkish-Syrian border, May 13, 2013. - REUTERS/Umit Bektas

Developments in Syria continue to take unexpected and unsavory turns for Prime Minister Recep Tayyip Erdogan and Foreign Minister Ahmet Davutoglu, whose overreaching and one-dimensional Syria policy — predicated solely on the fall of President Bashar al-Assad and his Baathist regime while smacking heavily of Sunni leanings — has resulted in new headaches for Ankara.

Misguided assumptions about Assad’s staying power, the scant attention paid to the country’s ethnic, religious and sectarian realities, and overt and covert support for al-Qaeda-affiliated groups along Turkey’s border with Syria are coming home to roost for the Erdogan government.

The victory by Syrian Kurds in the strategic town of Ras al-Ain on July 19 against Islamist fighters headed by Jabhat al-Nusra — designated a terrorist organization by the United Nations and the United States as well as a number of other Western countries — is only the latest development that has thrown Ankara off balance.

The Erdogan government was clearly banking on the success of al-Qaeda-linked Jabhat al-Nusra, not only against Assad forces, but also against Syrian Kurds, whose struggle for autonomy is spearheaded by the Democratic Union Party (PYD). Turkey has been wary of the political intentions of Syrian Kurds since the outbreak of violence in Syria. Ankara's concern is that moves by the Syrian Kurds toward autonomy could serve as examples for its own restive Kurdish population, which is seeking expanded rights.

During an official visit to Washington in January, Turkish Foreign Undersecretary Feridun Sinirlioglu reportedly criticized the timing of the US decision to declare Jabhat al-Nusra a terrorist organization. The English-language Hurriyet Daily News reported from Washington on Jan. 17, “US officials fear that groups such as the front could hijack the uprising. Turkish officials, however, said it was more important to focus on the ‘chaos’ that al-Assad has created instead of groups such as al-Nusra.”

Turkish officials deny, of course, that Ankara is arming groups affiliated with al-Qaeda. They argue that any logistic or humanitarian support from Turkey goes to the Free Syrian Army (FSA). Western diplomats in Ankara, however, say that Turkey does not discern between groups operating under the FSA umbrella, which includes those like Jabhat al-Nusra, whose open intention is to establish an Islamic state in Syria.

The May 11 twin car bombing in the Turkish town of Reyhanli, near the Syrian border, which killed more than 50 people, was a watershed in turning public opinion against the government’s Syria policy. It also turned public attention toward the situation of radical Islamist fighters in Syria using Turkey as a safe haven from which to operate. It is generally believed that this is one of the reasons for the Reyhanli atrocity, allegedly perpetrated by vengeful pro-Assad elements in Turkey.

The killing this month of Kamal Hamami, a senior member of the FSA’s Supreme Military Council, by another al-Qaeda-affiliated group, the Islamic State of Iraq and Syria, which is said to be acting independently of Jabhat al-Nusra, provided Ankara with another reminder that relying on such groups would in the end most likely produce undesirable results.

One of the most undesirable of these results for Ankara, however, has been that the presence of such groups in Syria has made short shrift of any possibility that the West would provide the FSA with sophisticated weapons to fight Assad’s forces. It was therefore inevitable that recent remarks by British Prime Minister David Cameron, indicating in effect that Britain would not arm the FSA, deeply disappointed Erdogan and Davutoglu.

Compounding their disappointment is that Ankara had put much stock in Britain’s previous keenness to arm the FSA. London’s pivotal role in May in getting the European Union to lift its arms embargo on Syria, which was also adversely affecting the Syrian opposition, had also raised hopes in Ankara that the FSA was finally going to get sorely needed heavy weapons from the West.

In a July 21 interview on BBC One’s Andrew Marr Show, however, Cameron provided clear evidence as to why Britain is opposed to arming the opposition now. Despite paying lip service to the notion of continuing to help the anti-Assad forces, Cameron said the opposition included "a lot of bad guys" within its ranks.

Pointing out, to Ankara’s chagrin, that Assad had strengthened his position in recent months, Cameron added, “And yes, you do have problems with part of the opposition that is extreme, that we should have nothing to do with."

Western diplomats in Ankara suggested to Al-Monitor that the killing of Hamami has only heightened concerns in Washington and London that arms supplied to the FSA could end up in the wrong hands. Turkey’s promotion of Jabhat al-Nusra as the most effective force against the Assad regime is, therefore, another item on the growing list of Ankara’s miscalculations on Syria.

The Egyptian transitional government's retraction of the toppled Muslim Brotherhood’s call for jihad against Assad provides further evidence that Ankara’s reliance on Islamists in the Syrian civil war has been misplaced. Worse yet for Ankara is that the PYD has rolled back Jabhat al-Nusra and other al-Qaeda-related groups in northern Syria.

This is likely to be welcomed by regional powers, not all of whom, as the actions of the Egyptian transitional government show, are enamored with radical Islamists. There is also the point that Amberin Zaman makes in her July 22 article for Al-Monitor: “Paradoxically, the PYD’s battle against militant Islamists serves the interests of Assad, the West and of the notionally secular Free Syrian Army rebels alike.”

The Erdogan government cannot discount the possibility that large numbers of secularists in Turkey who may also have had a “Kurdish phobia” at one time would also prefer to see a secular Kurdish entity emerge on Turkey’s border with Syria, rather than a fundamentalist operation imposing Sharia on the region. Ironic as it may seem for the Erdogan government, its successful cultivation and development of ties with northern Iraqi Kurds show that similar ties with a Kurdish entity in northern Syria need not be disastrous for Turkey.

The bottom line is that a host of misjudgments, as well as reliance on the wrong groups, has made a shambles of Ankara’s Syria policy, leaving Foreign Minister Davutoglu with few options besides issuing hollow warnings that Turkey will not allow “fait accomplis” on its borders. There is, however, little that Ankara can do other than sit and watch as the situation in Syria unfolds.

Meanwhile the call by Turkish ultranationalists to send the army into northern Syria to stop the Kurds has no credence whatsoever. Such a move would clearly lead Turkey even deeper into the Syrian quagmire.

Haluk Gerger, a well-known Turkish academic and foreign policy expert, once pointed to the turbulent landscape surrounding Turkey and likened it to a country trying to conduct foreign policy in a minefield. This is a crucial point that Davutoglu, for all his academic credentials, appears to have overlooked in his unrealistic and misplaced zeal to establish Turkey as the principal “game setter” of the region.