Turkish Prime Minister Recep Tayyip Erdogan tells US President Barack Obama he is “disturbed” by the rise of extremist groups in Syria. 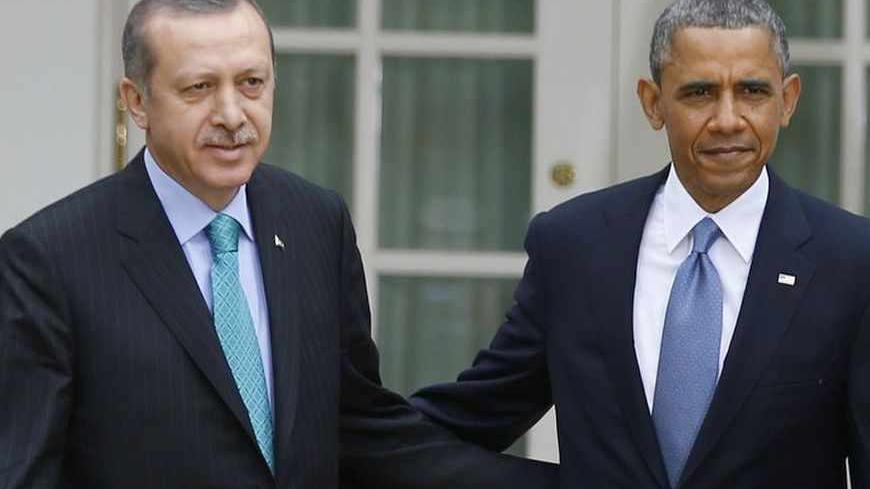 Signs are increasing that Ankara is gradually, albeit somewhat reluctantly, giving up its support for the radical Islamist group known as Jabhat al-Nusra, which it once promoted as the most effective force in Syria against President Bashar al-Assad.

Turkey had criticized as “premature” the US designation of al-Nusra as a terrorist organization in December 2012, given the advances the group appeared to be securing for the Syrian opposition at the time. During a visit to Washington in January, Turkish Foreign Undersecretary Feridun Sinirlioglu reportedly told his American interlocutors that “it was more important to focus on the ‘chaos’ that Assad has created instead of groups such as al-Nusra.”

Circumstances have changed since then, however, including the United Nations also listing the group as a terrorist organization. Meanwhile, al-Nusra’s presence in Syria, alongside other similar radical groups, has turned into a diplomatic handicap for Ankara in its efforts to secure weapons from the international community for the Syrian opposition.

Even Security Council members Britain and France, both once keen to arm the opposition, have stepped back, fearing that the sophisticated weapons required to tip the balance against Assad could end up in the hands of al-Nusra, or similar groups, and eventually be used against Western targets.

The deadly twin car bombings that killed at least 50 people in May in the Turkish town of Reyhanli, near the Syrian border, was allegedly perpetrated by pro-Assad elements avenging Turkish support for al-Nusra. The attack alerted a Turkish public already wary of Ankara’s Syria policy to the dangers of consorting with such groups.

The Erdogan government has always denied providing weapons to al-Nusra, but has been vague about the logistical support the group is said to be receiving from Turkey. That too may be changing, especially after al-Nusra failed to stop the advance of Kurds in northern Syria. The idea that Ankara is supporting al-Nusra and other radical Islamist groups against the Syrian Kurds operating under the mantle of the Democratic Union Party (PYD) has also endangered Erdogan’s ongoing efforts to secure a peace with the Kurdistan Workers Party in Turkey.

With al-Nusra’s activities beginning to rebound on Turkey in unexpected and undesired ways, the first sign that Ankara may be changing tack, at least as far as such groups are concerned, surfaced in a July 25 Radikal interview with Foreign Minister Ahmet Davutoglu.

Asked about alleged Turkish support for radical Islamist groups, including al-Nusra, Davutoglu angrily denied it, saying that such groups were doing “as much harm to the just cause of the Syrian opposition as the regime was.” He said he considered this to be a “betrayal of the Syrian revolution.”

The topic of al-Nusra was also discussed, it seems, during a telephone conversation between Prime Minister Recep Tayyip Erdogan and President Barack Obama on Aug. 7. The White House statement on the call noted, “The President and Prime Minister discussed the danger of foreign extremists in Syria and agreed on the importance of supporting a unified and inclusive Syrian opposition.”

Answering questions from reporters a day after that conversation, Erdogan, who reportedly placed the call, said that Syria had been a key topic of discussion. He acknowledged, “We discussed what kind of joint steps we could take on Syria. We all know that extremist groups are jockeying for a position there. We are disturbed by this. Western countries are also seriously disturbed by this. The fighting between extremist groups like the PYD and al-Qaeda has also resulted in tens of our citizens being martyred.”

The way in which Erdogan referred to Western concerns is interesting in this context. While Ankara may be moving toward closer cooperation with its allies in the West against radical Islamist groups in Syria, it is nevertheless noteworthy that Erdogan, like Davutoglu before him, did not mention al-Nusra by name, referring instead to “al-Qaeda.” Equally, if not more noteworthy, is that Erdogan described the PYD as an “extremist group,” which is doubly curious since Turkey has initiated an open and friendly dialogue with PYD leader Salih Muslim, whom the Foreign Ministry recently invited to Istanbul for talks.

Before Muslim's visit in July, pro-government newspapers reported that he had been invited to receive a warning not to strive for Kurdish autonomy in northern Syria. Muslim, however, later told reporters that his talks with Turkish officials had not only been cordial, but in a spirit of cooperation. He denied receiving a warning of any sort. According to press reports, Muslim is due back in Ankara in mid-August for more talks.

Erdogan’s reluctance to pronounce al-Nusra by name and the manner in which he referred to the PYD suggest that while his government is trying to move away from radical Islamist groups, he is still trying to maintain a balancing act aimed at not only satisfying his hardcore Islamist supporters, but also nationalists in Turkey who are vehemently against autonomy or independence for the Kurds.

It is also telling in this respect that Muslim — in an interview with Amberin Zaman of the daily Taraf (and an Al-Monitor contributor) — should have said that Turkey was still turning a blind eye to the weapons and other material going over its territory to al-Nusra. Whatever the truth of the matter, compared to a year ago it is clear that Ankara is now being forced to look at al-Nusra and similar groups with a different eye. This is not solely because of the Reyhanli bombings, which left most Turks wondering what Turkey was doing in Syria in the first place.

Other developments — such as the July 27 car bomb attack against a Turkish diplomatic post in Mogadishu, the Somali capital — are also making more people question Turkey’s flirtation with radical Islamist groups and its involvement in seemingly intractable disputes in the Islamic world. That al-Shabab, the militant Islamist group with connections to al-Qaeda, claimed responsibility for the Mogadishu attack has left Islamist supporters of the Erdogan government in Turkey in a quandary. Unable to cope with this fact, some pro-Erdogan papers have gone so far as to claim that the United States was behind the attack, in which six people were killed.

Meanwhile the kidnapping of two Turkish Airlines pilots in Lebanon on Aug. 9, by a group demanding that Turkey secure the release of Lebanese Shiite pilgrims abducted in 2012 by radical elements in the Syrian opposition, is also feeding into Turks' growing impatience with Ankara's involvement in Syria.

Whatever the delicate balancing act Erdogan is struggling to maintain in relation to groups like al-Nusra, there is increasing evidence to suggest that the coming period could see more coordination between Turkey and its Western allies, led by the United States, against radical Islamist groups in Syria that have begun to make Ankara’s Syrian headache worse.

Semih Idiz is a contributing writer for Al-Monitor’s Turkey Pulse. A journalist who has been covering diplomacy and foreign policy issues for major Turkish newspapers for 30 years, his opinion pieces can be followed in the English-language Hurriyet Daily News. His articles have also been published in The Financial Times, The Times (London), Mediterranean Quarterly and Foreign Policy magazine.