Pressure Mounts on Turkey Over Radical Groups in Syria

A recent Human Rights Watch report has drawn further attention to the need for Turkey to control its border and prevent the influx of jihadists to Syria. 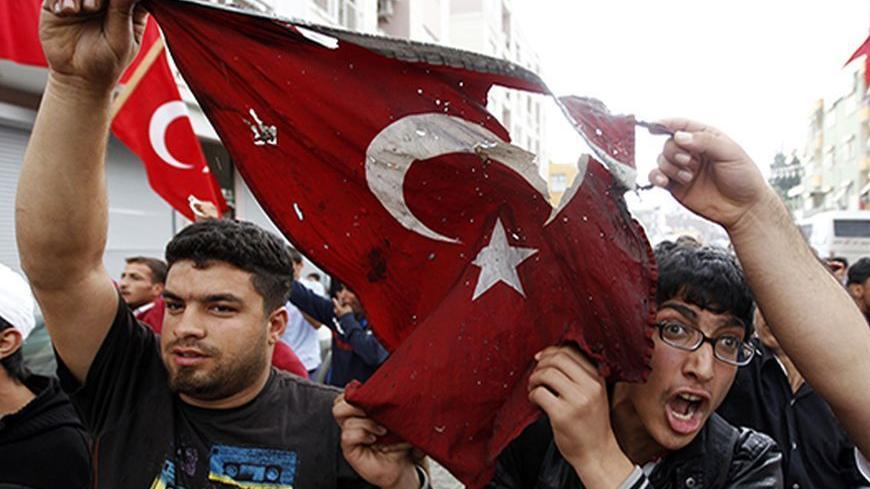 Turkish protesters march with a burnt national flag as they shout slogans against Prime Minister Tayyip Erdogan during a demonstration against the Turkish government's policy on Syria, after car bombings struck the border town of Reyhanli, May 13, 2013. - REUTERS/Umit Bektas

Turkey continues to deny that it is lenient with radical groups fighting to establish an Islamic regime in Syria, let alone actively supporting them, and the government of Prime Minister Recep Tayyip Erdogan is now much more open in its criticism of these groups than was initially the case.

The Erdogan government also announced measures in the Official Gazette on Oct. 10 freezing the financial assets of 349 people and 67 legal entities said by the UN Security Council to be linked to al-Qaeda and the Taliban.

Despite these steps, however, Ankara continues to be accused of turning a blind eye as members of these groups use Turkish territory for various purposes in their fight not just against the Assad regime, but also the moderate elements of the Free Syrian Army (FSA) and the Syrian Kurds.

Meanwhile, the spin being developed in the pro-government Islamist Turkish media is that the presence of these al-Qaeda-affiliated Sunni groups in Syria is actually a ploy on the part of Shiite Iran to undermine Ankara’s Syrian policy in order to support President Bashar al-Assad and his regime.

It is of course no secret that the Erdogan government initially supported the group known as Jabhat al-Nusra in the belief that it was the most effective fighting force against Assad. Ankara was also unhappy when the United States listed Jabhat al-Nusra as a terrorist organization in December 2012, believing this to be a premature step which would strengthen Assad’s hand. Today, however, the Erdogan government argues vehemently that it never supported Jabhat al-Nusra or any other radical group in Syria, saying it is opposed to terrorism wherever it comes from.

“We have said this over and over, both I and the prime minister. Turkey has no relations with any radical group in Syria, and I am especially referring to Jabhat al-Nusra. This accusation is ugly propaganda on the part of those who want to overshadow Turkey’s humanitarian policy in Syria,” said Foreign Minister Ahmet Davutoglu during an interview with CNN Turk in September.

The report goes on to indicate that foreign members of these groups are entering Syria “from Turkey, from which they also smuggle their weapons and obtain money and other supplies, and to which they retreat for medical treatment.”

It adds, “Turkey should increase border patrols and prevent the entry of fighters and arms for groups credibly implicated in systematic human rights violations. Turkey should also investigate and prosecute, under the principle of universal jurisdiction and in accordance with national laws, anyone in Turkey suspected of committing, being complicit in or having command responsibility for war crimes and crimes against humanity.”

HRW, which goes on to call on the UN Security Council and Ankara’s allies in particular “to do more to verify that no arms are passing through Turkey to abusive groups,”  is not the only one calling on Turkey to do more in this respect.

Salih Muslim, the leader of the Kurdish Democratic Union Party (PYD), which controls a number of towns and villages in northern Syria, has also accused Ankara in a series of recent interviews with Taraf columnist Amberin Zaman, who is also an Al-Monitor contributor, of aiding radical elements that have also been fighting with the PYD.

Muslim maintained in a September interview that Ankara was providing members of radical Islamist groups in Syria, and especially those fighting with the PYD, with medical care and supplying them with arms and ammunition. He also claimed Turkish border units were picking off PYD fighters with targeted fire while ensuring that roads were kept open for Jabhat al-Nusra elements fighting the PYD.

In his latest interview with Zaman on Oct. 7, Muslim appears more appreciative of Erdogan’s criticism of radical Islamist groups in Syria — who recently killed Muslim’s son — but is still skeptical on the question of Turkish assistance to these groups.

"Let’s see if after this, Turkey continues to train these gangs who chop off heads and eat the livers of their victims in camps reported to be operating at Bolu Mountain and in Ceylanpinar state agricultural farms," Muslim said, naming two alleged camps in Turkey.

His remark came after the al-Qaeda-affiliated ISIS, which is considered the most hard-line of these groups, captured the Syrian town of Azaz near the Turkish border from moderate FSA elements in September.

That development caused serious concern in Ankara and resulted in a new evaluation of these groups by the Erdogan government.

Around 500 Turks are also said to be included among the members of these radical groups, according to press reports based on estimates from sources in the Turkish intelligence agency MIT.  Family members of these fighters have indicated in interviews that the radical groups recruit the young men in towns such as Adiyaman, which alone was reported by Radikal on Sept. 29 to have provided 200 recruits. Radical also said in its report on the subject that the governor's office in Adiyaman and the local police headquarters refused to comment on the subject.

Despite official statements and some steps taken by the government, there is still a shroud of mystery over the whole topic. It is not clear if Turkey is still supporting these radical groups one way or another, or if it is actually incapable of controlling their cross-border activities given the length of the Turkish- Syrian border.

Turkey has had great difficulty in controlling this border in the past, and it has been used relatively freely by the separatist Kurdistan Workers Party, which has been fighting the Turkish army for nearly 30 years.

Whatever the case may be, these al-Qaeda-affiliated groups, which have no democratic agenda for Syria, are becoming a political and security liability for the Erdogan government. A recent article in the pro-government Zaman is also telling in this respect.

Citing experts from Turkish universities and think tanks, Zaman maintained in an article on Oct. 13 that Iran is ultimately behind accusations leveled at Turkey for allegedly allowing its border to be used by radical elements. Tehran’s alleged aim, according to those speaking to the paper, is “to broaden Assad’s field of operation while squeezing Turkey into a corner.”

Zaman added that Iran had successfully used ISIS to drive a wedge between Syrians combating Assad, and was now trying to leave Ankara in a difficult situation internationally by forcing it into a situation where it faces charges of supporting such groups.

Although the credibility of these claims are questionable, the Zaman report nevertheless shows that the Islamic media in Turkey is trying to rationalize a situation that has gone seriously wrong for the Erdogan government, according to its own ideological outlook.

But such spin is not likely to alleviate the pressure mounting on Ankara to take decisive action against these groups that take their cue from al-Qaeda and have little to do with democracy or human rights in Syria.