Saleh Muslim, co-chairman of the Kurdish Democratic Union Party, had messages for Ankara in an exclusive interview with Al-Monitor. 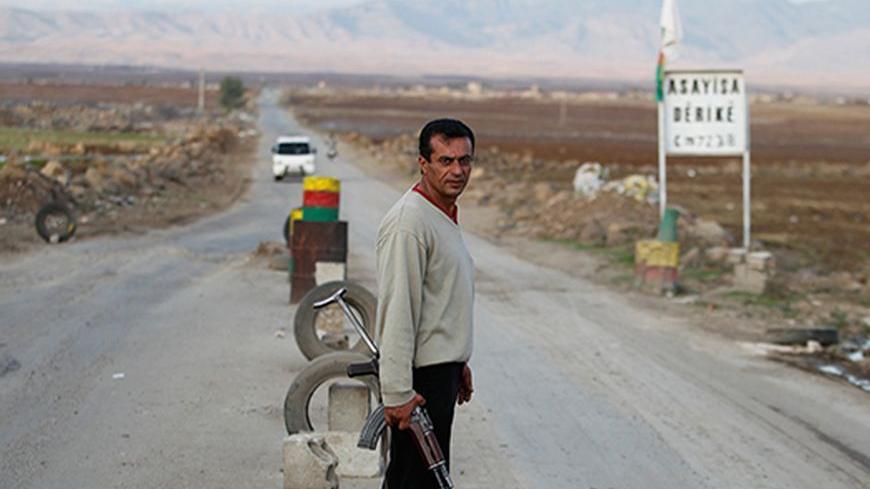 A Syrian Kurd Asaish stands at a security checkpoint at Derik in Al-Hasakah Oct. 31, 2012. - REUTERS/Thaier al-Sudani

Saleh Muslim, co-chair of the Kurdish Democratic Union Party (PYD) — which controls a string of mainly Kurdish-populated towns and villages in northern Syria and administers them through "popular councils" — has a few tempered messages for Turkey in an exclusive interview with Al-Monitor on Oct. 7. A few days later, on Oct. 9, as this article was about to be published, news emerged that Muslim's son Shervan, a fighter with the Popular Defense Units (YPG), had been shot and killed in the town of Tel Abyad by a sniper from the Islamic State of Iraq and al-Sham (ISIS). Muslim could not be reached for comment.

Muslim, who of late has accused Turkey of waging a proxy war against the PYD by supporting jihadist groups in Syria, said he appreciated the tough criticism delivered by Prime Minister Recep Tayyip Erdogan in late September to groups launching terror attacks in the name of Islam. Muslim also said there is no question whatsoever of his organization joining Syrian President Bashar al-Assad in taking hostile action against Turkey.

This was my sixth or seventh interview with Muslim over the past nine months. A graduate of chemical engineering from Istanbul Technical University, Muslim speaks perfect Turkish, and our interviews have always been conducted in Turkish. We could have spoken in English as well, because unlike many Kurdish leaders, Muslim also speaks that language quite well. Our interviews have been via Skype, because Muslim is constantly on the move. Our last interview, on Sept. 17, took place while he was in Iraq. This time, I caught up with him in Belgium.

Despite his exhausting schedule, the affable Muslim always breaks into a smile. He has a good sense of humor. In our previous interview, he was furious at Ankara. After being officially invited to Turkey in July and August, Muslim met in Istanbul with officials of the Foreign Ministry, National Intelligence Organization and others in the security sector. He briefed them on systematic and brutal attacks by Salafist groups, led by Jabhat al-Nusra and the al-Qaeda-linked ISIS, against Kurds. His briefing included documents attesting that these groups were moving back and forth across the Turkish border and included Turkish nationals among them. The Turkish official, while denying any knowledge of jihadists using Turkey as a rear base, admitted that jihadists could be infiltrating Syria without the state's knowledge. Muslim, seeking to establish friendly relations with Turkey, accepted these explanations in good faith.

Later, however, Muslim accused Turkey of facilitating the jihadists' cross-border movements by clearing passages through minefields and removing barbed wire. During our September interview, he had strong words for Turkey. He said he wanted to continue the dialogue with Ankara, but could not understand Ankara's support of extreme religious elements.

Muslim angrily charged that in addition to Ankara providing members of such groups medical care in Turkish hospitals and supplying them with arms and ammunition, Turkish border units were picking off members of the PYD’s military wing, the YPG, with targeted fire. Moreover, he accused Ankara of blocking the dispatch of relief assistance donated by Kurds in Turkey to Kurds in Syria. While keeping open crossings controlled by Ahrar al-Sham, designated as "moderate Salafists," and other Arab opposition groups, Turkey continued to keep closed those controlled by the PYD.

According to Muslim, Turkey wants to weaken the Syrian Kurds. The target has been the PYD more so than the Kurdish people themselves. After all, the PYD was set up by the Kurdistan Workers Party (PKK), which Turkey had been trying to eradicate for 29 years. In other words, after Iraqi Kurdistan, a second autonomous Kurdish region is emerging on Turkey’s southern border. Turkey's Justice and Development Party government has decided to respond by adopting an indirect policy toward the Kurds in Turkey and Syria of allegedly empowering Salafist groups opposed to them. Despite this, Muslim said, "We never retaliated. We didn’t fire a single bullet at Turkey."

Muslim added, however, that he thought Ankara might have reconsidered the situation after the September capture of Azaz by ISIS fighters from gangs under the banner of the Northern Storm that pretend to be opposition forces, and have actually been controlling border trade for years and after the deployment of ISIS forces on the Turkish border.

"Let’s see if after this Turkey will continue to train these gangs who chop off heads and eat the livers of their victims in camps reported to be operating at Bolu Mountain and in Ceylanpinar state agricultural farms," Muslim said. He added, "Obviously this policy hurts Turkey more than us. Who carried out the Reyhanli bomb attack? Perhaps al-Nusra, no?"

Further complicating the situation is the claim by the ISIS that it was responsible for the suicide bombing in Erbil, capital of the Kurdistan Region of Iraq, that killed seven people on Sept. 28. It was odd that the ISIS cited the support provided to Syrian Kurds by Kurdistan Regional Government President Massoud Barzani as the reason for the attack. Barzani, whose relationship with the leftist-Marxist-leaning PYD had never been close, has been, under Turkish counseling, restricting crossing of Syrian Kurds to Iraq to exert pressure on the PYD.

Iraqi Kurdish officials allow passage of refugees and humanitarian assistance but block trade and individual crossings. An Iraqi official explained the reason for this practice: "The PYD is making money from those crossing by collecting taxes." Muslim responded to the officials' assertion by countering, "It is not only us. They collect taxes, too. If they agree to eliminate taxes, we will too."

Is there really a softening of Ankara’s attitude toward the Kurdish region of Syria, or Rojava? According to Muslim there are some positive indications, but it is still too early to reach a conclusion. Only this month, Foreign Minister Ahmet Davutoglu cited three conditions for normalizing relations with the PYD: "The first is to take a clear position against the Syrian regime. The second is to participate in the Syrian opposition [i.e., the Istanbul-based Syrian National Coalition]. Third, to display their will to avoid any de facto actions until an elected Syrian parliament comes into being and makes a legitimate decision to determine the future of the Syrian people."

According to Muslim, Syrian Kurds have had a clear position against the Baathist regime for years. The PYD, established in 2003 to secure the national rights of Syrian Kurds within Syria, occasionally fought against regime troops. Many PYD members were jailed, including Muslim, who was imprisoned for his political activities. Muslim categorically rejects allegations that the PYD has cooperated with the Assad regime.

The reason for the PYD's not actively joining the fight against Assad is not totally illogical: Muslim does not want to risk the gains of the Kurds by antagonizing the regime. Muslim asked, "What is this you call the opposition? They are in pieces, going after each other’s throats. If the ones fighting in Syria don’t recognize the ones in suits sitting in Istanbul as their legitimate representatives, why should we?"

As to Davutoglu’s warning for the PYD to avoid taking de facto actions, Muslim insisted, "Syrian Kurds neither want independence nor a federal structure similar to Iraqi Kurdistan. All we want is recognition of our political and cultural rights and the right to govern ourselves in our region." He quickly added that the administration set up in Rojava is a "temporary" structure for managing daily life in a wartime environment.

Muslim pointed out that Turkey has a border of about 900 km [600 miles] with Syria. He then offered, "We want good relations with Turkey. Our people live on the Turkish side of the border as well. Families are split. We want them to unite."

Does that mean he is dreaming of a union with Turkey? "No," said Muslim. "We want very close relations but we are part of Syria and will remain as such. We have to establish healthy fraternal relations with the Arabs too. We want to live together in peace."

Going back to a possible easing of Turkish policy on Syria, Muslim thinks Erdogan’s clear and tough condemnation of various terror attacks in the name of Islam include the extremist groups in Syria. "Erdogan said the right thing. I share his views 100% and applaud his remarks," Muslim asserted.

He sees Turkey's permission in recent weeks to allow assistance convoys to Rojava to cross the border as another positive development. "It really helped our people. For this, we are grateful to Turkey." He also noted the Oct. 8 visit to Ankara by a delegation from the Kurdish Supreme Council, composed of Syrian Kurdish parties, and their meeting there with Foreign Ministry officials.

Although Davutoglu had said the visit was "routine, with no special agenda," there were two representatives of the Democratic Social Movement, which is organically linked to the PYD, in the delegation.

One can conclude that Muslim, who said, "Who knows, perhaps I will also come soon," is again approaching relations with Turkey with cautious optimism.