In an interview, Saleh Muslim, co-chairman of the Democratic Union Party (PYD), says that Turkey is ceasing its proxy war against the PYD by ending its support for jihadist groups in Syria. 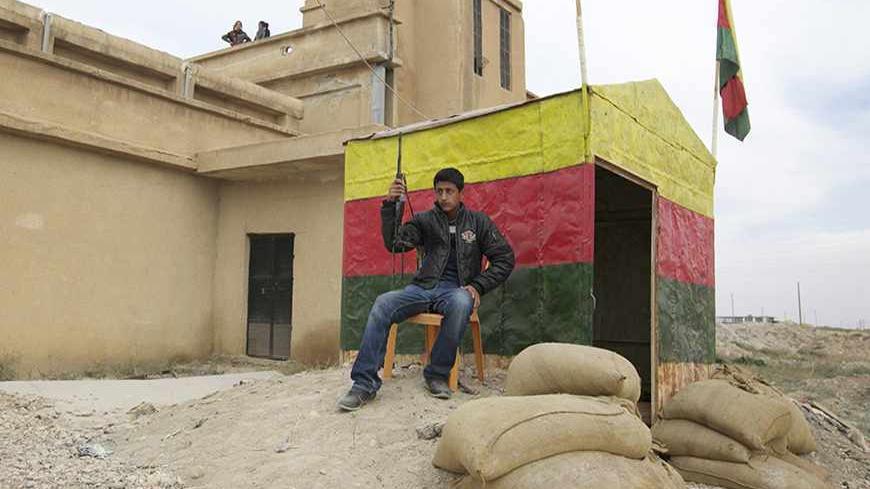 A member of the Kurdish People's Protection Units (YPG) carries his weapon as he sits at a checkpoint near Ras al-Ain, Nov. 5, 2013. - REUTERS

Saleh Muslim, the co-chairman of Syria’s most powerful Kurdish party, the Democratic Union Party (PYD), has been holding talks in Geneva with Russian and Western officials in preparation for the planned Geneva II peace conference between the Syrian government and opposition groups. I caught Muslim in Paris on Nov. 7 to seek his views on what progress had been achieved and where his group stood on a solution to the two-year Syrian conflict.

Muslim said the Geneva II talks were unlikely to take place in the near future. He blamed the lack of progress on the Istanbul-based Syrian National Coalition (SNC), and regional powers Turkey and Saudi Arabia.

All are demanding that Syrian President Bashar al-Assad step down as a precondition for any peace agreement. Saudi Arabia is opposed to Iran’s participation. That position is expected to be reiterated when the SNC meets in Istanbul on Nov. 9 and 10.

The PYD sees matters differently: Muslim argued that demanding Assad’s resignation was “unnecessary when it is patently clear that he will be shorn of all his powers in any transitional government.” The Kurdish leader added, “We are working on the basis of the principles agreed during Geneva I, and our focus should be to build on these, not to throw up unrealistic hurdles

Muslim also believes that any attempt at peace that excludes Iran cannot succeed either.

Muslim once again denied long-running accusations that his group is allied with the Assad regime. The PYD’s policy has been to remain neutral in the conflict and consolidate the Kurds’ gains after Syrian forces ceded control of a string of Kurdish-populated towns along the Turkish border.

The PYD’s refusal to join the SNC has plagued its relations with Turkey. In addition to Turkish pressure, this is why the United States continues to shun contact with Muslim. Muslim said that he sought a meeting with Robert Ford, the US ambassador to Syria, in Geneva this week but that “once again he refused to talk with me.”

The PYD is part of the Supreme Kurdish Council, an umbrella group that was formed in July 2012 under the mentorship of Massoud Barzani, president of Iraq’s Kurdistan Regional Government (KRG). The council was supposed to unite all of the Kurdish groups in Syria around a common platform.

The Syrian Kurds, who represent around 10% of the country’s population, ought to have a strong say regarding Syria’s future. But continued squabbles between a bevy of Kurdish parties, few of which have any real influence, together with mounting friction between the PYD and Barzani’s Kurdistan Democratic Party, have paralyzed the Kurdish National Council. The reality is that the PYD is firmly in control and reluctant to share power with its rivals, who played no role in liberating the Kurdish areas.

The Kurdish Freedom Party, Azadi, and the Kurdistan Democratic Party of Syria, led by Hakeem Bashar, both Barzani allies, have now joined forces with the SNC. Several smaller groups are sitting on the fence.

Muslim insists that the Kurds ought to represent themselves at the Geneva conference, a position that is backed by Russia. Their demands for greater political and cultural autonomy must be enshrined in a new constitution. And these need to be negotiated with a future transitional government, not with the opposition, which as Muslim put it “is a complete mess.”

Muslim has reason to feel confident. The war for control over northern Syria between the PYD and a loose coalition of jihadist and Free Syrian Army forces is turning in the PYD’s favor. On October 27 the PYD’s armed affiliate, the People’s Defense Units (YPG) captured Yaroubiya, a strategic border crossing with Iraq from al-Qaeda-affiliated Islamic State of Iraq and al-Sham (ISIS).

Yaroubiya, or Til Kocher in Kurdish, was a key supply route for al-Qaeda-linked groups moving in and out of Syria. The crossing will now help relieve the effects of the dual embargo implemented by the KRG and Turkey to punish the PYD.

The biggest news that Muslim delivered was that Turkey’s alleged proxy war against the PYD might be over. Fresh fighting erupted between the YPG and ISIS around the border town of Ras al-Ain in late October. Yet, according to Muslim, “There have been no jihadist fighters coming from Turkey as before. Turkey has ended its support for the jihadists. That is how things look now and we very much hope this state of affairs will continue.”

Turkey has reversed its policy “because of international pressure but also because these groups pose a grave threat to Turkey itself.”