Syrian Kurds prefer to keep their options open for autonomy in northern Syria. 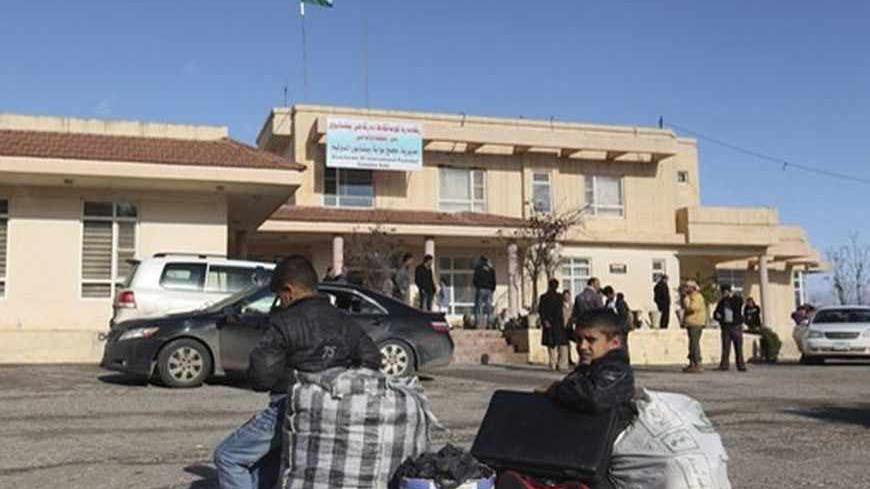 Syrian Kurdish children with luggage wait to cross into Iraqi territory outside the Peshabur border gate at the Syrian-Iraq border, Feb. 2, 2013. - REUTERS/Azad Lashkari

Fighting erupted on July 17 between jihadists affiliated with al-Qaeda and Kurdish fighters close to the Syrian branch of the Kurdistan Workers Party (PKK) in the province of Hassakeh in northern Syria. The fighting was sparked by an incident at a checkpoint of the al-Qaeda-affiliated Jahbat al-Nusra in the mixed city of Ras al-Ain, where Arabs, Kurds, and Christians live, close to the Turkish border. The fighting was still taking place today, July 22.

It was most likely sparked by the fact that the Democratic Union Party (PYD) wants to form an interim government, while al-Qaeda affiliates such as Jahbat al-Nusra and the Islamic State of Iraq and as-Sham (ISIS) want to form an Islamic emirate in Syria. After fighting several groups such as Jahbat al-Nusra, ISIS and Harakat, Ahrar al-Sham al-Islamiya — the leading faction of the Syrian Islamic Front — declared an operation to seize the oil-rich town of Rumeylan in Hassakeh province from the PYD.

Although many Kurdish activists and PYD rivals closer to Kurdish parties affiliated with the Kurdistan Democratic Party (KDP) of Massoud Barzani in neighboring Iraq are critical of the PYD and fear their plans for Kurdish autonomy. They would prefer the PYD over an al-Qaeda-controlled Islamic emirate that is against an ethnic Kurdish identity.

Before the fighting started on July 17, Kurdish youth groups and PYD critics were angered by the death of six civilians allegedly shot by the People's Defense Units (YPG) at an anti-PYD demonstration in the border town of Amuda on June 27 — an action condemned by the US State Department.

But after the fighting started between al-Qaeda affiliates and the Kurdish people’s Defense Units (YPG), most of them criticized the jihadist groups. This shows that attempts by jihadists to get Kurdish support will prove to be fruitless, despite their trying to show they are not against Kurds.

On a pro-jihadist Facebook page, a call was made for Kurdish mothers to stop sending their children to fight with the PKK and ask God for forgiveness for sending their sons and daughters to fight against jihadist groups. Moreover, the pro-jihadist page claimed to have carried out revenge for what happened in Amuda by attacking PKK positions in the Hassakeh province.

But even Kurdish jihadists will find it difficult to criticize the PKK in this case, and the Kurdish Islamic Scholar’s Union in the Kurdistan region of Iraq released a statement calling on Iraqi Kurds not to wage jihad, but to support Kurds in Syria.

Thus, most Kurdish youth groups did not advocate jihadist calls for support against the PKK. For instance, the Kurdish Youth Coordinators Union launched a campaign to urge Kurds to join the YPG to fight against al-Qaeda proxy organizations and unite all the Kurdish parties.

This, while on June 28 the same Kurdish youth group suggested that Jabhat al-Nusra, the YPG and the regime were terrorists. “But in the current phase we have no choice better than the YPG,” a Kurdish Youth Coordinators Union member said, claiming the PYD was acting like the regime and killing Kurdish civilians.

When activists were trying to lobby with a petition in Arabic to put the PYD on the terrorist list — similar to other PKK affiliates — and the Syrian Revolution Facebook page tried to launch Friday protests on July 12 under the slogan "No to PYD terrorism," most PYD rivals condemned this action and opposed it to uphold a form of Kurdish unity.

Recently, even Abdulhakim Bashar, leader of the Barzani-supported Kurdish Democratic Party of Syria (KDP-S) — who is despised by supporters of the PYD — supported the YPG in an interview on the pan-Arab satellite channel Al Arabiya television, while in the past this prominent Kurdish politician often criticized the PYD and YPG.

“We as Kurds are usually secularists, and the reason for that is the injustice that we suffer through Islamic history, and certainly we would be against any new caliphate project,” KDP-S member Mohammed Rasho told Al-Monitor.

Thus, it was no surprise that the Kurdish National Council (KNC) — which was formed in October 2011 as an alternative to the PYD — also backed the YPG against al-Qaeda elements in a statement. However, some in the KNC are worried that a Kurdish interim government would exclude other Kurdish parties.

Even Mustafa Cummaa's Kurdish Freedom Party Azadi — which is often accused by the PYD of backing the Free Syrian Army against the PYD — criticized jihadist groups.

“Brotherhood among the people in Islam does not mean that all have to live in one nation under one political system,” said Welid Sexo, a member of the Kurdish Freedom Party, a rival to the PYD.

The jihadist groups are now trying to depict the PKK as atheist, while the PYD follows a more secular ideology. This even led to worries among some Turkish experts that by fighting al-Qaeda groups, the PYD might regain more legitimacy in Western eyes, while the PYD seems to be trying to get more sympathy by fighting jihadists.

“If the United States and the West do not take Kurds into account, radical Islamists will take over, and that will cause Syria to break up,” YPG commander Sipan Hemo told Rudaw. “We see radical Islam as a threat not only to ourselves, but also to the Turkish people and the world as well.”

Most Syrian Kurds are Sunni Muslim, but nevertheless they do not favor a caliphate and Islamic brotherhood which in the end will be dominated by Sunni Arab Muslims, with less opportunity for Kurdish cultural or political demands.

But the Islamic Ahrar al-Sham movement — which also fights against the YPG — released a statement in May against both Kurdish and Arab nationalism, suggesting that nationalism failed as an ideology in the 19th century in Europe.

“Now we see some Muslims who have been deluded into thinking in nationalist terms. The Quran rejects this idea, when it says that Muslims are protectors of one another.” The statement added that all Arabs and Kurds are equal in their rights and obligations toward the law of God as part of the Muslim umma.

“Arab nationalism and its system came and created divisions and caused racism between the sons of the umma. And this is prohibited by the Prophet, may God send his peace and blessings upon Him.”

The predominant Kurdish nationalism among the PYD and other Kurdish parties explains why most Kurdish parties refused to join the Istanbul-backed Syrian opposition, the Syrian National Coalition (SNC), despite Western pressure. The SNC says that the "division of Syria" is a red line, and that it wants to deal with Kurdish demands after the fall of Bashar al-Assad's regime.

Khaled Khoja, a member of the SNC based in Turkey, told Al-Monitor by Skype on July 19, “This issue can be discussed in the Syrian parliament after the regime's fall. We are not against any administrative parliament. If the parliament is like the local council in Aleppo, we have no problem with it.”

This is the reason that not many Syrian Kurds supported the Syrian opposition blocs, not even when it was headed by Abdul Baset Saida, a Syrian Kurd from Amuda, or Ghassan Hito, a Kurd from Damascus. Most of the Syrian Kurds prefer a recognition of a form of Kurdish autonomy over an Islamic al-Qaeda emirate or a post-Assad Arab-dominated state.