The PKK-affiliated Democratic Union Party is consulting the political parties of the Kurdistan Regional Government in Iraq on plans to form an interim government for Kurdish-controlled enclaves in Syria. 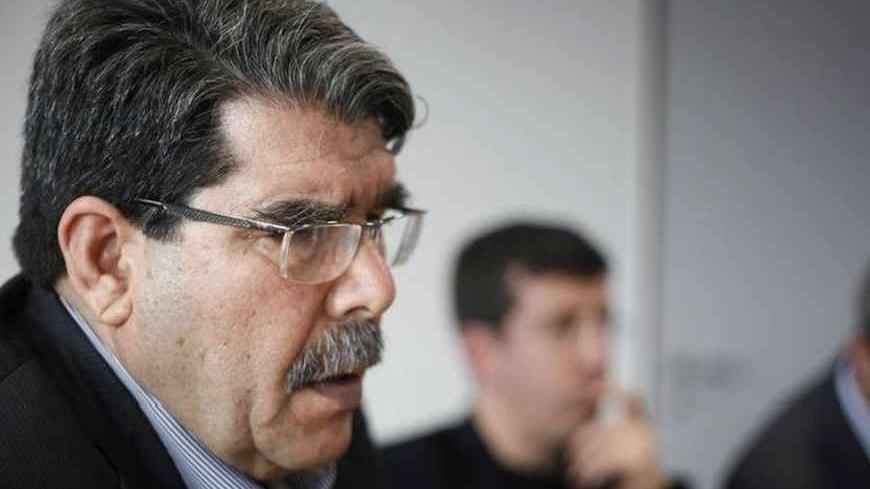 Saleh Muslim, head of the Kurdish Democratic Union Party (PYD), is pictured during an interview in Berlin, April 18, 2013. - REUTERS/Wolfgang Rattay

The Kurdish Democratic Union Party (PYD), which is close to the rebel Kurdistan Workers Party (PKK), has proposed a plan to form an interim administration within three months, a referendum on a draft constitution and parliamentary elections within six months.

Rumors suggested that the PYD would announce their autonomy project officially on July 19. On this day, the PYD commemorates the one-year anniversary of the withdrawal of Assad's forces from nine Kurdish-dominated towns. The PYD controls most of the Kurdish areas apart from Assad-controlled Qamishli and some mixed cities and towns in the provinces of Hasakah and Aleppo.

The public announcement of the plan follows the death of six demonstrators in the border town of Amuda in a clash between the People’s Defense Units and Kurdish protesters on June 27, which again proved the weakness of the political agreements between the PYD and rival Kurdish political parties. Moreover, it coincides with recent fighting that erupted between al-Qaeda proxies and the Defense Units over control of oil-rich Hasakah province.

Before and after the incident there were several meetings between the PYD and the two ruling parties in the Kurdistan Region of Iraq. The PYD met with Iraqi President Jalal Talabani’s Patriotic Union of Kurdistan and Kurdistan’s regional President Massoud Barzani’s Kurdistan Democratic Party and also some of the opposition parties. Moreover, there were meetings in Syria between the Kurdish parties.

On July 9, PYD officials met with Barzani, and on July 13, its officials met with Adil Murad, a co-founder of the Patriotic Union of Kurdistan, who asked for reopening the borders that are controlled by the Kurdistan Democratic Party that were closed on May 19 after PYD-affiliated militias arrested members of a pro-Kurdistan Democratic Party militia that was trying to enter the border without knowledge of the PYD, and which was criticized by Human Rights Watch.

Most likely, the plan of the PYD, which is also supported by the PKK, was even discussed before the Amuda incident, since there were at the time also meetings between the PYD, Kurdistan Democratic Party and Patriotic Union of Kurdistan.

These tensions over control of the border and the clashes in Amuda have shown that the Supreme Kurdish Council, which was supposed to jointly govern the Kurdish areas with the PYD and the various parties that are members of the Kurdish National Council, does not function and still leads to clashes between the various Kurdish blocs.

This is the result of the existence of two fronts among the Syrian Kurds. The first is the so-called Qandil or Slemani front, which includes Kurdish parties from Syria that are closer to the PKK and the Patriotic Union of Kurdistan. Some claim this front is closer to Iran, Russia and Syria and more critical of Turkey. This front allegedly dominated the Supreme Kurdish Council, which made it more difficult for Kurdistan Democratic Party-supported parties to have influence inside Syria.

This, while the second Erbil front led by Barzani is closer to Turkey, had led to allegations by pro-PYD websites that this front cooperates with Barzani against the party. The PYD accused the Kurdistan Democratic Party of supporting anti-PYD armed groups by closing the border during Defense Units' clashes with Islamist armed groups. This front lacks influence inside Kurdish areas of Syria or established militias, but does have good relations with the West.

Barzani earlier hinted that that free elections should be held to end the alleged unilaterally imposed control of the Kurdish areas by the PYD.

The interim administration would replace the Supreme Kurdish Council to end these differences and would follow Barzani’s suggestion to hold elections. The People’s Council of West Kurdistan already released a draft constitution online.

Alan Semo, a PYD representative, told Al-Monitor by Skype, “All Kurds are debating how to form a transitional government in the Kurdish areas. They are preparing to establish a self-governance of the Kurds in Syria including all political parties and youth groups.”

He added, “Even the Kurdistan Democratic Party and the Kurdistan Regional Government are supporting this debate and establishment. We are now preparing in Europe for the foundation of this and seeking advice from Europe and the UN.”

He confirmed that the Supreme Kurdish Council would be replaced by the transitional government after three months.

Even though the PYD said it doesn’t want to secede from Syria, the move could anger Turkey and the Syrian National Coalition, whose leader would meet the Kurdish parties in Cairo.

One of Turkey’s demands to open the talks was that the PYD would “avoid making any territorial claim or any unilateral de facto autonomy before a Syrian national assembly convenes.” Allegedly, contacts between the PYD and Turkey have ended.

Fayiz Zara, a member of the Coalition, told the Kurdish newspaper Rudaw that it was better for the Kurds to give up this idea since it would lead to partition of Syria.

But Semo, the PYD official, said they do not want to divide Syria: “We are not dividing Syria nor are we declaring a state.” He emphasized that the interim administration would be included with the future Syrian government after the fall of Assad. “It is not separation, but integration,” he said.

Kurdish rivals of the PYD are also critical of the project, especially due to rumors that there are attempts to divide the Syrian state into Alawite, Sunni and Kurdish regions.

Mohammed Rasho, a member of the Kurdish Democratic Party of Syria, told Al-Monitor in a statement, “The idea is not applicable, because the central government in Damascus still exists and [is] powerful, as does powerful armed opposition on the outskirts of the Kurdish region, and [both] the regime and the opposition [support] severe rejection of legitimate Kurdish rights.”

Moreover, he asserted, “There is just one single party [that] has the force and arms, which is the PYD, therefore this initiative would be imposed on the other parties, even if they didn't accept it.”

Welid Sexo, a member of the Kurdish Freedom Party, told Al-Monitor, “The building of a government in Kurdistan Syria is a very good job, but has to include all the parties, youth groups and civil organizations and cooperate with Arabs and Christians in Kurdistan Syria without the Assad regime.”

Azad Ali, a spokesman of the Syrian Kurdish Revolution Council that fought in cooperation with the FSA against the Defense Units in Efrin, rejected the idea and suggested it’s a plan of the Syrian government:

“We are in the opposition of any Kurd, Arab or any government to be created in this time. Kurdish rights will be protected after the fall of Assad. The government that is made by the PYD is similar to what has been made by the Taliban and al-Qaeda, who plan to build an Islamic structure in Syria,” he said.

But despite of this criticism, the PYD wants to emphasize that it seeks to hold elections after dialogue with other Kurdish parties.

“It’s now time for all Kurdish parties, but also for Christians, to form an administration. It wouldn’t be right for the PYD to do this by themselves,” Servuan Hassan, PYD’s diplomatic representative in Europe, told Al-Monitor after a conference of the Patriotic Union of Kurdistan and the PKK in the Netherlands on July 14.

Wladimir van Wilgenburg is a political analyst specializing in issues surrounding on Kurdish politics. He has written extensively for Jamestown Foundation publications and other journals such as the Near East Quarterly and the World Affairs Journal. He currently writes for the Kurdish newspaper Rudaw. On Twitter @vvanwilgenburg