Clashes Break Out Between Kurdish Groups In Syria 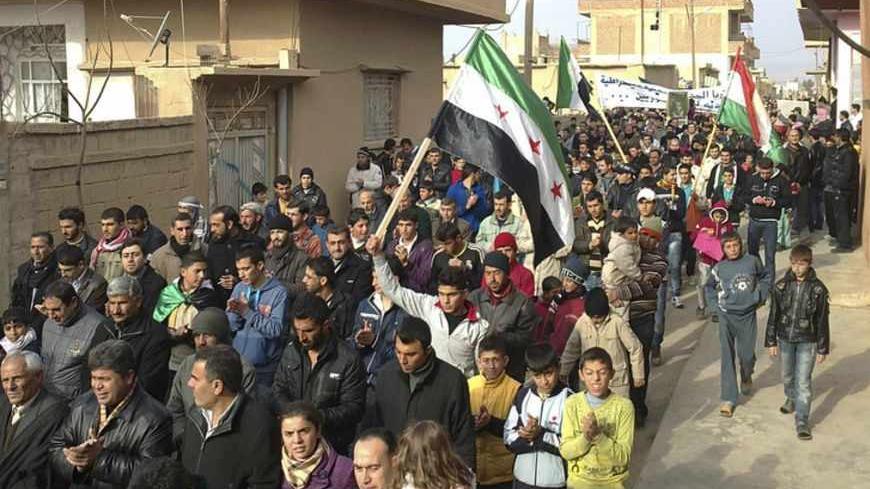 Kurdish protesters clashed with the militia of the Kurdish Democratic Union Party (PYD) in the rebellious town of Amude on March 27 over the lack of services which resulted in several wounded and led to fears of more fights between Kurds in Syria.

The clash lead again to tensions between the supporters of the imprisoned PKK-leader Öcalan and supporters of Massoud Barzani, the president of the Kurdistan region in neighboring Iraq and head of the Kurdistan Democratic Party (KDP) in Syria. The Syrian Kurds have been heavily influenced by Kurdish parties from outside, although they have their local parties.

The town of Amude is famous among Kurds for its history. Every year, Syrian Kurds commemorate the killing of hundreds of Kurdish schoolchildren, who died in a cinema fire in Amude on Nov. 13, 1960, which was blamed on Arab nationalists.

“Amude is a beloved city because of the cinema fire, and because they always make jokes, and they were the first to destroy Assad’s statue, in 2004, in the history of the Baath Party,” said Bader Mustafa, a member of the Kurdish Youth Movement (TCK), an independent Kurdish youth group operating in Syria.

Amude’s Kurds destroyed statues of the Syrian president’s father, Hafez al-Assad, during the Kurdish uprising which erupted after a football match in Qamishli between a local team and a team from Dayr al-Zour on March 12, 2004, which was crushed by the government, and which still negatively effects relations between Arabs and Kurds in the anti-Assad uprising.

However, now it’s not Assad dominating the Kurdish areas of Syria in the north, but militias affiliated with the PYD, which is the Syrian affiliate of the Kurdistan Workers Party (PKK), which is in negotiations with the Turkish government over a solution to the Kurdish issue in Turkey.

The PYD have formed the de facto authority on the ground in many of the Kurdish cities in Northern Syria bordering with Turkey and Iraq through the Supreme Kurdish Council, a governing body which unites several Kurdish parties, and the PYD-affiliated People’s Defense Units (YPG) militia and a local police force called Asayish (Kurdish for security).

Experts speculate that PYD’s control of Kurdish areas in Syria stimulated the Turkish government to talk with the PKK, fearing it could endanger the security of Turkey.

Although the Supreme Kurdish Council was formed, with the support of Barzani, between the PYD and rival Kurdish parties united within the Kurdish National Council (KNC) in the summer of 2012 to prevent a civil war, tensions remain. Rivals of the PYD accuse the council of being dominated by the PYD and it’s leftist allies within the KNC.

The major rival of the PYD is the weaker KDP-funded political alliance, the Democratic Political Union, which unites four rivals of the PYD and managed to control the major positions in the KNC, while the PKK-affiliate dominates the Supreme Kurdish Council and it is the de facto authority on the ground.

Most hotels, restaurants and cafés in the Kurdistan region now employ Syrian Kurds, while before the Syrian revolution, it was mostly Arabs and Kurds fleeing from volatile areas in Iraq.

Tensions calmed down after two fighters of the YPG were released by the Free Syrian Army on March 17, who were allegedly handed over by the PYD rival to the FSA, and with the PYD asserting its control in Efrin.

But despite this, there were also tensions between PYD supporters and supports of KDP-funded parties in Jenderes, Qamishli, Derik, Hasakah and in Amude in the month of March. On April 1, there was a small protest in Hasakah which called on the PYD to release a pro-KDP militia insurgent called Mahmoud Hussein.

Mohammed Reso, a member of the Kurdish Democratic Party in Syria, which is the oldest Kurdish party in Syria and headed by Abdulhakim Bashar, who also leads the political union, told Al-Monitor the March 27 clash erupted after a demonstration began in front of the electricity company, protesting the interruption of electricity and water services: “YPG forces intercepted the demonstration and tried to disperse them on the grounds that it was not licensed. … A car [arrived] loaded with eight to 10 gunmen and they shot into the air to scare people. However, some demonstrators had responded and one of the YPG was wounded. Then YPG fired at the legs of demonstrators. There were a number of wounded with minor injuries.”

An anonymous member of a Kurdish youth group told Al-Monitor that the demonstration “was peaceful, but the PYD first started to fire at people. Then the KDP sent some gunmen in response to the PYD firing.”

But Alan Semo, a spokesperson of the PYD, denied this and claimed the demonstration was an attack by the KDP-funded parties against the PYD’s offices and the Kurdish Red Cross, a humanitarian relief organization dominated by PYD.

“The demonstration in Amude was armed provocation by political union parties to destabilize and undermine the peacefully and democratically running administration by Asayish [security] and Kurdish Supreme Council,” he said.

“Two Asayish men were injured and many civilians were injured and the offices were damaged. The Asayish is conducting an investigation, however the man who delivered the weapons to demonstrators and incited to shoot, [has] admitted [his role] and [was] seeking a pardon of the Asayish,” Semo added.

According to Sirwan Kajjo, a Kurdish Syrian journalist based in the US, the situation is calm now. “The committee to mediate between the two sides failed to do anything, though. But things are a bit better now.”

It remains unclear however, if KRG president Barzani supports a fight and tensions between the PYD and KDP-funded parties. “The KDP wants to have some influence in these areas, but I am not sure if the KDP supports these policies,” said Barzan Isso, a Kurdish journalist who regularly visits Syria.

The Chief of Staff of the Kurdish president, Fuad Hussein, said during a conference at American University of Iraq in Sulaimani, that the KRG has good ties both with the PYD and KNC and advises them not to fight: “We want you to be united, but it is up to you how you are struggling. If you ask for our advice: don’t fight each other. We learned from our internal fights and we still pay the prize of our internal fight here,” he said.

Jordi Tejel Gorgas, an expert on Syrian Kurds based in Switzerland, told Al-Monitor these tensions are nothing new and have existed since 2011. “They don't represent a new dynamic and probably tensions will prevail between these forces despite all political agreements at a "national level" (Arbil agreement for example) and local level.”

The expert says that the PYD is seeking to become the hegemonic political and military force in northern Syria. “Which it already is, and it will not allow other actors to challenge its status gained since 2012.”

“On the other hand, the KDP-supported parties must try to secure their role within the present context if they don't want to become completely marginal in the aftermath of the current conflict,” he added.

But he says that without a stronger involvement of president Barzani in Jazira [Hasakah province], “the PYD will remain unbeatable due to its pre-existing networks (since the 1980s), better organization, higher discipline, and popularity of Abdullah Öcalan (which probably is increasing as the PKK has become a "legitimized" political force in Turkey)”.

A PKK insurgent in the Kandil mountains, with the nickname Reza, said that he doesn’t expect a civil war like the Iraqi Kurds fought over control of the Kurdish autonomous area after the withdrawal of Saddam from Northern Iraq in 1991, and that all the problems can be solved by meditation.

“I won’t expect such a thing in Rojava [Syrian Kurdistan]. The enemies had a hand in the civil war and after the Kurds found out, they realized it and they know they shouldn’t fight each other.”

Wladimir van Wilgenburg is a political analyst based in the Kurdistan Region of Iraq who specializes in issues surrounding Kurdish politics. He has written extensively for Jamestown Foundation publications and other journals such as the Near East Quarterly and the World Affairs Journal. In addition to Jamestown, he currently writes for the Kurdish newspaper Rudaw and was the co-author of the Henri Jackson Society report Unity or PYD Power Play? Syrian Kurdish Dynamics After the Erbil Agreement.