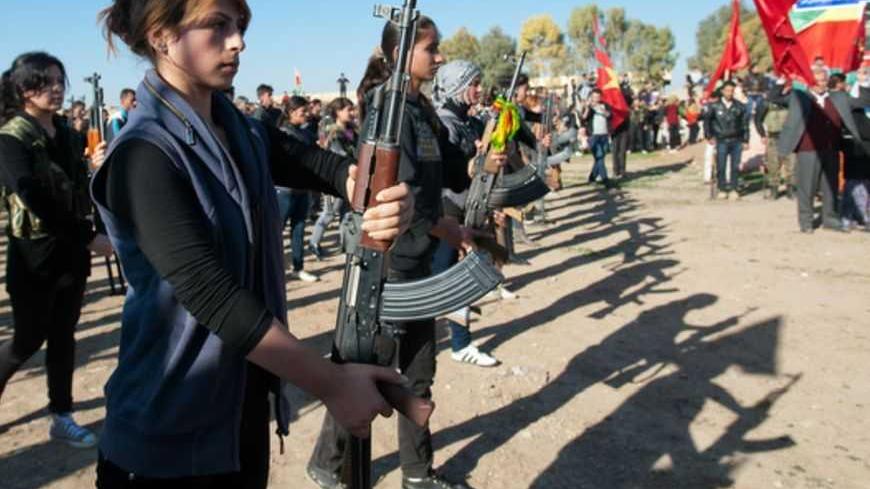 Syrian Kurdish women and members of the Popular Protection Units (YPG), an armed opposition group fighting against the Syrian government, stand guard during the funeral of a comrade, Basil Zeydan, in the northern Syrian border village of al Qamishli on Dec. 1, 2012.

In the beginning of March, a Kurdish militia took over oil fields and installations in northeastern Syria, declaring their willingness to share the resources with the Syrian opposition if the Kurds would get their own share.

With the ongoing civil war between Syrian government forces and Arab rebels, a Syrian Kurdish party called the Democratic Union Party (PYD) and its militia, the Kurdish People’s Defence Units (YPG), are increasingly using the power vacuum to create a form of Kurdish autonomy similar to that which Iraqi Kurds enjoy.

The PYD has set up local councils, security forces and Kurdish-language schools, creating a parallel government in the north of Syria.

The YPG took control over Tall ʿAdas on Jan. 21, after fighting with the Syrian Army. In March, the YPG took control of Ramalan and the oil fields south of the city of al-Qahtaniya without firing a shot after surrounding regime forces there for a days.

Mohammed Reso, a PYD spokesperson based in the neighboring Kurdistan Region of Iraq, told Al-Monitor that the People’s Defence Units now control most of the Kurdish areas in Syria, adding, “Maybe Qamishli is 40% under government control, the rest we control.”

The PYD, which is allied to the militant Kurdistan Workers Party in Turkey, denies that connection. But despite this, Turkey remains worried and accuses the group of cooperating with the President Bashar al-Assad government of Syria.

This statement followed a cease-fire agreement between rebels of the Free Syrian Army (FSA) and the YPG in the mixed city of Ras al-Ain near the Turkish border, where they met to coordinate their movements and establish joint checkpoints to avoid tensions. This agreement was supported by the Syrian opposition, but did not include any discussions about sharing the oil resources of northern Syria.

Therefore, despite fights between the YPG and the armed Syrian opposition in the past, the YPG declared in a statement that only the main Syrian opposition group, the Syrian National Initiative, and the Supreme Kurdish Council, a body uniting various Kurdish political factions including the PYD, have the right to discuss the future of resources in the oil-rich province of Hasakah.

“Only the Supreme Kurdish Council and the National Syrian Coalition have the right to debate about the Syrian Oil Company,” the general command of the YPG said in a statement.

The Syrian Petroleum Company was left operating the field after foreign oil companies pulled out of Syria after the imposition of sanctions. The YPG said they would protect the oil installations in the future against any armed group trying to loot the resources, since the field is a "national institution belonging to the sons of the Syrian people."

“The liberation of the town of Ramalan is of great importance in the framework of the liberation of the cities of west Kurdistan [Syria’s Kurdish areas] [...] since this oil wealth has been stolen over the years without benefitting the Kurdish people,” the YPG said, referring to the period during which Syrian government controlled the oil resources.

Alan Semo, a representative of the PYD based in the United Kingdom, told Al-Monitor that the Kurds plan to share the resources with the rest of Syria. The PYD wants to prevent accusations that the Kurds want to separate from Syria.

“In an agreement with a future Syrian government, the Kurds are running their areas. The oil is for all of Syria. We are part of Syria — we do not take the oil, we want to take our share in an agreement between all Kurds, Arabs and Syrian people.”

Moreover, Semo said it is possible that in a future agreement, the Kurds can supply the "liberated areas" controlled by the FSA with oil.

But rivals of the PYD have accused the party of making an agreement with the regime in the past and protecting its oil fields.

Mustafa Cumma, a leader of the Kurdish Freedom Party, one of the Kurdish rivals to the PYD, told Al-Monitor that the PYD “took control of Ramalan and Tirbespi, but still many places are under government control. It is like the PYD has gotten permission from them.”

Sirwan Kajjo, a Syrian-Kurdish journalist based in Washington, DC, confirmed this. “As far as I know, [the PYD] control everything. The thing is all fields have stopped working. But there are still regime forces close to those areas.”

He added, “PYD will eventually share them with the opposition unless something unpredictable happens. I believe the PYD's control of these fields is temporary. Things would change when Assad has departed. But I expect some more infighting between the PYD and local Arab FSA fighters.”

Moreover, it is unclear if the Syrian opposition can use the heavy oil without controlling Homs. Robin Mills, an energy strategist and economist based in Dubai, thinks the oil cannot be used without being refined. In the past, the oil of Hasakah was sent from al-Qahtaniya through a pipeline to Banyas and Homs, were it was refined.

“It's heavy oil, which isn't good for much unless refined. Perhaps it could be burned for heat. Otherwise, it could be smuggled into Turkey or Iraqi Kurdistan and sold for a few dollars. Given a bit more time, they could set up a teapot refinery to skim off some products.”

The PYD might have no choice but to share the natural resources with the future Syrian government. Negotiations between the Kurds and Damascus could be as troublesome as they are in neighboring Iraq.

Moaz al Khatib, the leader of the Syrian opposition body the Syrian National Initiative, told the Turkish daily Milliyet that the division of Syria "is a red line," but they are willing to discuss with the Kurds in the future how to govern Syria.

Wladimir van Wilgenburg is a political analyst specializing in issues surrounding on Kurdish politics. He has written extensively for Jamestown Foundation publications and other journals such as the Near East Quarterly and the World Affairs Journal.